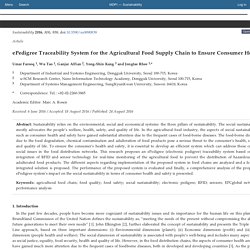 Introduction In the past few decades, people have become more cognizant of sustainability issues and its importance for the human life on this planet. The Brundtland Commission of the United Nation defines the sustainability as; “meeting the needs of the present without compromising the ability of future generations to meet their own needs” [1]. John Elkington [2], further elaborated the concept of sustainability and presents the Triple Bottom Line approach, based on three important dimensions: (i) Environmental dimension (planet); (ii) Economic dimension (profit) and (iii) Social dimension (people health and welfare). The social dimension of sustainability is associated with people’s well-being and includes many aspects; such as social justice, equality, food security, health and quality of life.

SCIENCE DAILY 14/06/16 Electronic bacteria sensor is potential future tool for medicine and food safety. A new type of electronic sensor that might be used to quickly detect and classify bacteria for medical diagnostics and food safety has passed a key hurdle by distinguishing between dead and living bacteria cells. 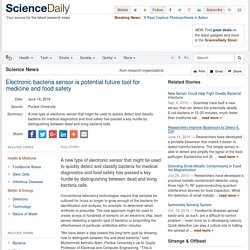 Conventional laboratory technologies require that samples be cultured for hours or longer to grow enough of the bacteria for identification and analysis, for example, to determine which antibiotic to prescribe. The new approach might be used to create arrays of hundreds of sensors on an electronic chip, each sensor detecting a specific type of bacteria or pinpointing the effectiveness of particular antibiotics within minutes. "We have taken a step toward this long-term goal by showing how to distinguish between live and dead bacteria," said Muhammad Ashraful Alam, Purdue University's Jai N.

Gupta Professor of Electrical and Computer Engineering. Findings are detailed in a research paper appearing this week in Proceedings of the National Academy of Sciences. NATURE 04/04/16 SCIENTIFIC REPORT - A novel, optical, on-line bacteria sensor for monitoring drinking water quality. Measuring principle The developed sensor consists of: 1) an optical flow-cell holding the water sample during analysis, 2) a dark field imaging setup with a light-emitting diode (LED) light source, a magnification lens, and a complementary metal-oxide semiconductor (CMOS)-based camera arrangement (Fig. 1A), and 3) an image analysis system to identify and classify individual particles. 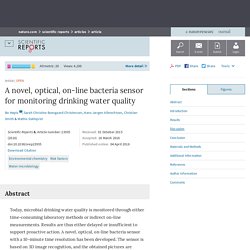 (A) Schematic of flow cell, light source, lens, and camera. (B) Image stack of a particle coming into focus and out again as the tilted image plane moves across it. (C) Extraction of parameters from recorded image stacks and comparison to library data. (D) Classification of particles in “Bacteria” and “Abiotic particles”. The water sample is led through the flow-cell by the pressure of the water source or by a peristaltic inlet pump. The camera is only moved a small fraction of the image length (2.3%) between individual images, causing each particle to be recorded on up to 40 images. FOOD SAFETY BRAZIL - AVRIL 2016 - A simple and rapid method for detecting living microorganisms in food using laser speckle decorrelation. 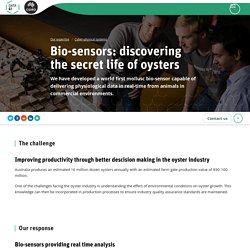 One of the challenges facing the oyster industry is understanding the effect of environmental conditions on oyster growth. This knowledge can then be incorporated in production processes to ensure industry quality assurance standards are maintained. Bio-sensors providing real time analysis CSIRO and the University of Tasmania, through our Sense-T partnership, have developed a world first mollusc bio-sensor capable of delivering multiple physiological parameters in real-time from sentinel animals in commercial environments. The sensors, which are smaller than the size of a pea, connect to a credit card sized electronics board and are attached to ‘sentinel’ animals. 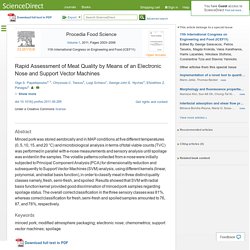 NATIONAL RESEARCH CENTRE FOR BIOTECHNOLOGY - 2001 - Biosensors for process monitoring and quality assurance in the food industry. Foods 2014, 3, 491-510 Past, Present and Future of Sensors in Food Production. Biotechnology Advances Volume 28, Issue 2, March-April 2010, An overview of foodborne pathogen detection: In the perspective of biosensors. Int. J. Electrochem. Sci., 7 (2012) Electrochemical Sensors and Biosensors for Influenza Detection. 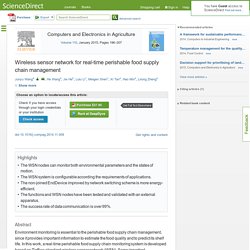 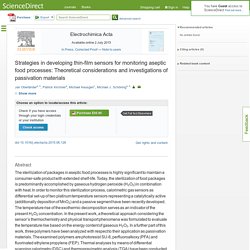 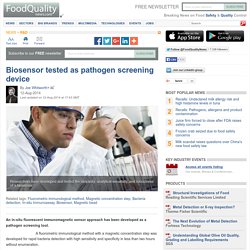 The method involves performing an in-situ immunoassay on a magnetic bead through the formation of a sandwich complex of the target bacteria and the probe followed by the release of fluorophores by enzymatic digestion with proteinase K. Factors critical to the suitability of detection methods and sensors were investigated, including sensitivity, limit of detection (LOD), detection time and ease of use.

It consists of an immunomagnetic bead as a solid support for capturing bacteria and a probe antibody-dBSA conjugate labeled with fluorophores (IFdBSA). Pathogens tested The LOD was <5 CFU/mL of the tested pathogens (E.coli O157:H7, Salmonella typhimurium, and Listeria monocytogenes) in buffer. Fluorescence images of bacteria used as targets and stained by the corresponding IFdBSA probe. Applied Biochemistry and Biotechnology. 06/2014 Graphene Oxide-Based Biosensor for Food Toxin Detection. 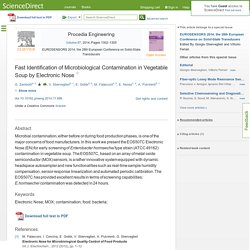 In this work we present the EOS507C Electronic Nose (EN) for early screening of Enterobacter hormaechei type strain (ATCC 49162) contamination in vegetable soup. Keywords. MIT NEWS 14/04/15 MIT sensor detects spoiled meat - Tiny device could be incorporated into “smart packaging” to improve food safety. MIT chemists have devised an inexpensive, portable sensor that can detect gases emitted by rotting meat, allowing consumers to determine whether the meat in their grocery store or refrigerator is safe to eat. 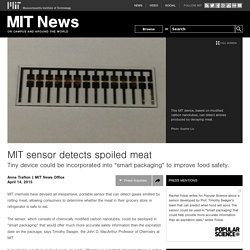 The sensor, which consists of chemically modified carbon nanotubes, could be deployed in “smart packaging” that would offer much more accurate safety information than the expiration date on the package, says Timothy Swager, the John D. MacArthur Professor of Chemistry at MIT. It could also cut down on food waste, he adds. “People are constantly throwing things out that probably aren’t bad,” says Swager, who is the senior author of a paper describing the new sensor this week in the journal Angewandte Chemie. The paper’s lead author is graduate student Sophie Liu.

The sensor is similar to other carbon nanotube devices that Swager’s lab has developed in recent years, including one that detects the ripeness of fruit. International Research Journal of Biological Sciences Vol. 2(10), 76-84, October (2013) Nanobiosensors: Diagnostic Tool for Path. CONFBANK_UM_ac_ir - 2013 - Biosensors and Their Application in Food and Contaminants Analysis.

EUREKALERT 19/06/13 Recent progress in gene-sensing strategies for rapid detection of foodborne pathogens. Public release date: 19-Jun-2013 [ Print | E-mail Share ] [ Close Window ] Contact: Zhu Xiaozhuxiao@scnu.edu.cn Science China Press Food is the basis of human survival and development, and its safety is an important issue for people's livelihood, and also an important indicator to measure the quality of people's lives in a country.

The statistics showed that the main factor of Chinese food poisoning remained to be microbial pathogens, ranking before the chemical toxin. FOOD QUALITY NEWS 02/08/13 ME biosensors show promise for pathogen detection on food surfaces. Pathogens can be detected on fresh food surfaces in real-time and in-situ thanks to a coil measurement technique demonstrated by researchers. The surface-scanning coil detector excites and measures the resonant frequency of free-standing magnetoelastic (ME) biosensors that may be placed outside the solenoid coil boundaries. Previously they had to be placed inside the coil before frequency measurement which limited their use to small objects or volumes that will fit within the coil, said Chai et al. However, they found that the biosensor's frequency changes in a high humidity condition (95% RH).

VETERINARY WORLD - DEC 2013 - Biosensors: tool for food borne pathogen detection. PHYSORG 18/10/13 Salmonella sensing system: New approach to detecting food contamination enables real-time testing. As anyone who has ever consumed bacteria-contaminated food and experienced "food poisoning" can tell you, it's a miserable experience. Yet it's an all-too-common one, with foodborne illnesses making 1 in 6 Americans—or 48 million people—sick each year. Of these people sickened, 128,000 end up in the hospital, according to the Centers for Disease Control and Prevention, while 3,000 die.

However, improving the turnaround time (TAT) of a test requires attention to more than the analytic TAT, and will only occur if postanalytic processes (test reporting and care interventions) are also rapid and efficient. Obstacles to rapid MDRO test development include complex evolving resistance mechanisms, performance directly on mixed samples (eg, nares, stool), and adaptation of new methods for routine clinical diagnostic use. Received November 19, 2012.

BIONANOSCIENCE - DEC 2012 - Biosensors as Novel Platforms for Detection of Food Pathogens and Allergens. Food safety involves preparation and storage of food in different ways to prevent food-borne illness. Ever increasing incidences of food-borne diseases have led food industry to employ rapid and inexpensive method of analysis. It is important not only for health, but also from economic point of view because food-borne diseases result in financial losses. Stringent laws have been made for preparation, packaging, and storage of food. Various techniques are used in food industry but biosensing has received considerable attention due to its high specificity and quick response at low cost. American Journal of Analytical Chemistry, 2012, 3, 210-232 Biosensors for Pesticide Detection: New Trends. FOOD QUALITY 04/12/12 Biosensors a key area for nanotechnology. Nanobiosensors hold considerable potential as future areas of development for nanotechnology, according to a recent study.