Moeten we blij zijn met de miljarden van Zuckerberg? For Facebook's Zuckerberg, Charitable Is in Eye of Beholder. However philanthropic the intentions of Mark Zuckerberg, he isn’t required to give a penny of his $45 billion to charity despite his announcement Tuesday. 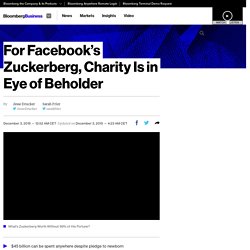 In a widely publicized letter to his newborn daughter, Zuckerberg with his wife, Priscilla Chan, said they would give 99 percent of their Facebook Inc. shares to “advance” various missions, including promoting equality and curing disease. Mark Zuckerberg and the Rise of Philanthrocapitalism. The announcement by Mark Zuckerberg and his wife, Priscilla Chan, that, during their lifetimes, they will donate to philanthropic causes roughly ninety-nine per cent of their Facebook stock, which is currently valued at close to forty-five billion dollars, has already prompted a lot of comment, much of it positive. 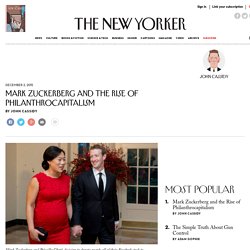 That is understandable. The fact that Zuckerberg, Bill Gates, Warren Buffett, and a number of other billionaires are pledging their fortunes to charity rather than seeking to pass them down to their descendants is already having an impact. Last year, the Bill & Melinda Gates Foundation, which was founded in 2000, dispensed almost four billion dollars in grants. A big slug of this money went toward fighting diseases like H.I.V., malaria, polio, and tuberculosis, which kill millions of people in poor countries. Zuckerberg and Chan have also already donated hundreds of millions of dollars to various causes, including eradicating the Ebola virus. That is the positive side. How Mark Zuckerberg’s Altruism Helps Himself. Did not donate $45 billion to charity. 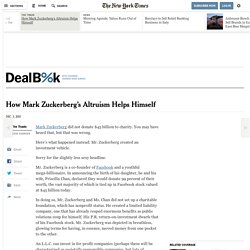 You may have heard that, but that was wrong. Here’s what happened instead: Mr. Zuckerberg created an investment vehicle. Sorry for the slightly less sexy headline. Mr. In doing so, Mr. Donor’s disclosures deliver a shock to the system. Winfried Stöcker, an honorary professor at Lübeck, has views on immigration that conflict with German universities’ self-image. 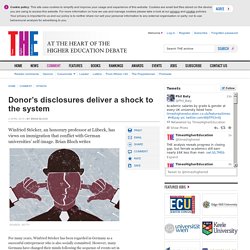 Brian Bloch writes. Tristram Hunt: The business of giving. Ask any New York head-hunter and they will tell you the talent has moved uptown. 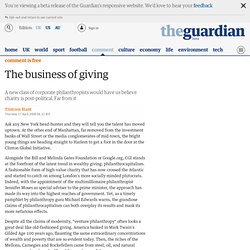 At the other end of Manhattan, far removed from the investment banks of Wall Street or the media conglomerates of mid-town, the bright young things are heading straight to Harlem to get a foot in the door at the Clinton Global Initiative. Alongside the Bill and Melinda Gates Foundation or Google.org, CGI stands at the forefront of the latest trend in wealthy giving: philanthrocapitalism. A fashionable form of high-value charity that has now crossed the Atlantic and started to catch on among London's more socially minded plutocrats. Indeed, with the appointment of the multimillionaire philanthropist Jennifer Moses as special adviser to the prime minister, the approach has made its way into the highest reaches of government. Susan Ohanian's Testing Outrages (Susan Ohanian Speaks Out)

Where the Philanthropy $$$ Go and Why You Should Care by Susan Ohanian Reminder: Money spent by "philanthropies" is money shielded from tax collection, so money that should go into public coffers becomes money for the filthy rich to play with--at public expense. 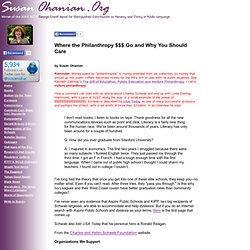 See Kenneth Saltman's The Gift of Education: Public Education and Venture Philanthropy. I call it vulture philanthropy. How a comment can start with an article about Charles Schwab and end up with Linda Darling-Hammond, with a pass at ALEC along the way, is a small example of the power of $$$$$$$$$$$$$$$$$$. The New Face of Philanthropy. Book Review Philanthrocapitalismby Matthew Bishop and Michael Green Beginning with Warren Buffett's multibillion-dollar gift to the Bill and Melinda Gates Foundation in 2006 and Bill Gates's decision to turn his primary attention to giving all of that money away, philanthropy has been a hot topic in business circles. 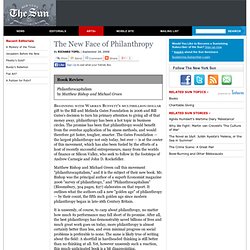 The promise has been that philanthropy would benefit from the overdue application of bu siness methods, and would therefore get faster, tougher, smarter. The Gates Foundation — the largest philanthropy not only today, but ever — is at the center of this movement, which has also been fueled by the efforts of a host of recently successful entrepreneurs, many from the worlds of finance or Silicon Valley, who seek to follow in the footsteps of Andrew Carnegie and John D.

Rockefeller. Philanthrocapitalism: after the goldrush. It's indisputable that something genuinely important is stirring in the world of philanthropy - a movement to harness the power of business and the market to the goals of social change, what Matthew Bishop calls "philanthrocapitalism". 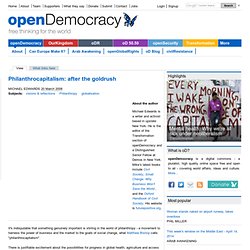 There is justifiable excitement about the possibilities for progress in global health, agriculture and access to micro-credit among the poor that have been stimulated by huge investments from the Bill & Melinda Gates Foundation, the Clinton Global Initiative and others. Philanthrocapitalism should certainly help to extend access to useful goods and services, and it has a positive role to play in strengthening important areas of civil-society capacity. Sponsors of Policy: A Network Analysis of Wealthy Elites, their Affiliated Philanthropies, and Charter School Reform in Washingt. 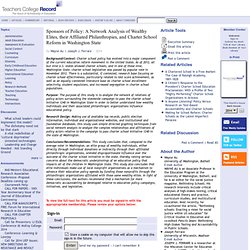 TC Record (TCRecord) sur Twitter. Sponsors of Policy: A Network Analysis of Wealthy Elites, their Affiliated Philanthropies, and Charter School Reform. Ask Arne: The Role of Private Funds and Interests in Education. Duncan Says Gates Has No Seat at the Education Policy Table. Anthony Cody comments on a startling conversation between two teachers and Secretary of Education Duncan. 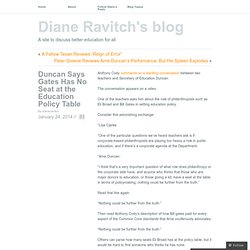 The conversation appears on a video. One of the teachers asks him about the role of philanthropists such as Eli Broad and Bill Gates in setting education policy. Duncan: Bill Gates Has No Seat at the Education Policy Table. Joiselle Cunningham and Lisa Clarke are Teaching Ambassador Fellows. That means they are teachers who have been relocated to Washington, DC, to work for the Department of Education for a year.

Today they released a video in which they pose some questions to Secretary of Education Arne Duncan. These questions should be familiar to readers of this blog, as they have been asked many times over the past few years. I am providing some excerpts from this interview below, followed by my reaction. Lisa Clarke: One of the particular questions we've heard teachers ask is if corporate-based philanthropists are playing too heavy a role in public education, and if there's a corporate agenda at the Department. The flip side to Bill Gates' charity billions.

Last year, Bill Gates reminisced in the Huffington Post about his first trip to Africa in 1993. ‘I saw that many of the world’s lifesaving, life-enhancing discoveries were not available in Africa,’ he said. ‘That was deeply upsetting… I became convinced that if science and technology were better applied to the challenges of Africa, the tremendous potential of the continent would be unleashed and people could be healthier and fulfil their promise.’

Having spent 18 years making as much money as possible with Microsoft (the computer software company he co-founded in 1975), in 1994 Gates started giving it away. Philanthropic funds are common among the super-rich in the US; they enable tax avoidance provided five per cent of net investment assets are given away annually. What quickly set Gates’ fund apart was its orientation towards the poor – rather than élite culture or religion – and its sheer size. New book: Obama’s Education Department and Gates Foundation were closer than you thought. A senior from TechBoston Academy reacts as President Obama walks into her classroom with Melinda Gates, center, and then-Education Secretary Arne Duncan, far right. (Jim Watson/AFP via Getty Images) Megan E. Tompkins-Stange is an assistant professor of public policy at the Ford School of Public Policy at the University of Michigan who has written a highly revealing book about the power and influence of four major foundations in education-reform policy in recent years.

She researched “Policy Patrons: Philanthropy, Education Reform, and the Politics of Influence” over several years, in which she was given access to officials in four foundations — Bill and Melinda Gates, Eli and Edythe Broad, Ford, and W.K. Kellogg— as well as permission to quote people without attribution. local answer-sheet.

Brian Jones - Still Separate, Still Unequal. @susanoha site search Bill Gates. 22248 in the collection Your query for generated 21758 hits. Define "Charity" This time of year affords me the luxury of taking a few days to just read, write, and think. And it's at times like this that I can pull a few threads together to make a larger tapestry (yeah, the summer seems to be straining my metaphors a bit...). Yesterday, I detailed the rapper Pitbull's foray into the wacky world of for-profit charter schooling. Academica: Floridas richest charter school management firm - Cashing In On Kids.

PARADISE ISLAND, Bahamas On a sun-drenched weekend in September, a group of South Florida charter school principals jetted off to a leadership retreat at The Cove, an exclusive enclave of the Atlantis resort. Accountability for Mr. Gates: The Billionaire Philanthropist Evaluation - Living in Dialogue. Bill Gates Dances Around the Teacher Evaluation Disaster He Sponsored. Bill and Melinda Gates: Why giving away our wealth has been the most satisfying thing we've done. Bill Gates criticism. An Open Letter to Bill Gates and a Keynote Challenge. Dear Bill, De Toekomst van de Financiering van de Wetenschap 4 juni 2013. FreezePage. Prog. New Director of Development appointed. 31 May 11. Liesl Elder (LieslElder) sur Twitter.