Meet The Team Trying To Save People From Homelessness This Christmas. Kids Are Tying Coats to Street Poles for Homeless People to Wear and Stay Warm This Winter. Halifax, Nova Scotia's residents have recently been seeing an interesting sight: coats tied to street poles. 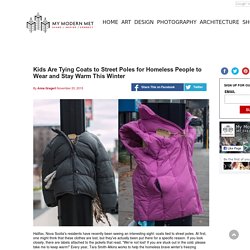 At first, one might think that these clothes are lost, but they've actually been put there for a specific reason. If you look closely, there are labels attached to the jackets that read, "We’re not lost! If you are stuck out in the cold, please take me to keep warm! " Every year, Tara Smith-Atkins works to help the homeless brave winter's freezing temperatures. She asks the community to donate old coats and then invites local children to help her tie them to lamp posts for those in need.

As the kids are tying outerwear to the poles, Smith-Atkins aims to teach them an important lesson. Next year, Smith-Atkins hopes to include a $5 voucher in each coat pocket so the wearer can buy themselves a hot meal. Above photo credit: Halifolks via [Design You Trust, CBC] All photos via Tara Smith-Atkins unless otherwise stated. Ethics and sustainability. Volunteer articles good and bad. Wama Childrens aid uk. English children among the unhappiest in the world at school due to bullying. Children in England are unhappier at school than their peers in almost every other country included in a new international survey, with widespread bullying causing huge damage to their wellbeing. 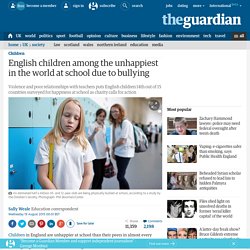 An estimated half a million 10- and 12-year-olds are physically bullied at school, according to a study by the Children’s Society, which found that 38% of children surveyed had been hit by classmates in the last month. In an international comparison of children’s happiness in 15 countries, the report concluded that children in England were unhappier with their school experience than their peers in 11 other countries, including Ethiopia and Algeria.

The findings, which are outlined in the Children’s Society’s annual Good Childhood report, carried out in collaboration with the University of York, paint an alarming picture of children’s experiences at school in England, and their wider sense of wellbeing. “We know that this is related to their mental health and can prevent them flourishing. The Maseno Project. I-HEART (movement of people helping people) The Problem of Bullying in the UK. Man Installs a Charity Fridge Outside His Home. 10.9K 213ShareNew In all my enthusiasm for stories about refrigerators, somehow I missed this very sweet one from Saudi Arabia. 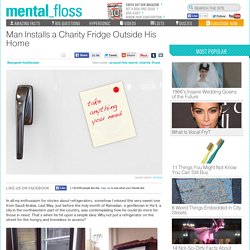 Last May, just before the holy month of Ramadan, a gentleman in Ha’il, a city in the northwestern part of the country, was contemplating how he could do more for those in need. That’s when he hit upon a simple idea: Why not put a refrigerator on the street for the hungry and homeless to access? Shaikh Mohammad Al Araifi According to the BBC, the man, who wishes to remain anonymous, hoped that he could restore people's dignity by sparing them from having to beg for food. (h/t BBC) Nextinct.com – planet aware apparel Nextinct.

Sponsor a Room. ChildAid. United Nations World Food Programme ... Computers4africa.org.uk - Computers for Africa - Home. Joshua Project - Unreached Peoples of the World. Cool acts of random kindness what a inspiration to us all. Invisible Children. Open Doors - Serving persecuted Christians worldwide. Official Home of the Free Hugs Campaign - Inspired by Juan Mann - Home. WCER: About WCER. The Wisconsin Center for Education Research is one of the oldest, largest, and most productive university-based education research centers in the world. 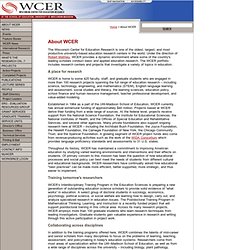 Under the direction of Robert Mathieu, WCER provides a dynamic environment where some of the country's leading scholars conduct basic and applied education research. The WCER portfolio includes research centers and projects that investigate a variety of topics in education. A place for research WCER is home to some 425 faculty, staff, and graduate students who are engaged in more than 100 research projects spanning the full range of education research – including science, technology, engineering, and mathematics (STEM), English language learning and assessment, social studies and literacy, the learning sciences, education policy, school finance and human resource management, teacher professional development, and value-added modeling. Training tomorrow's researchers Collaborating across disciplines Using technology to facilitate research. Solar aid. The Green Children Foundation. Living Generously: alternative and unique gifts for good that change lives.