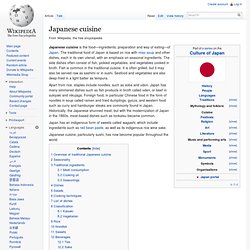 The traditional food of Japan is based on rice with miso soup and other dishes, each in its own utensil, with an emphasis on seasonal ingredients. The side dishes often consist of fish, pickled vegetables, and vegetables cooked in broth. Fish is common in the traditional cuisine. It is often grilled, but it may also be served raw as sashimi or in sushi. Seafood and vegetables are also deep-fried in a light batter as tempura. Apart from rice, staples include noodles, such as soba and udon. Japan has an indigenous form of sweets called wagashi, which include ingredients such as red bean paste, as well as its indigenous rice wine sake.

Japanese cuisine, particularly sushi, has now become popular throughout the world. Overview of traditional Japanese cuisine[edit] Japanese cuisine is based on combining the staple food which is steamed white rice or gohan (御飯?) The small rice bowl or chawan (lit. Gourmet Chocolate of the Month Club - Chocolate Club. The Cocoa Plan - Nestlé. Recipe Websites. Food. Fooood! TLC : Family, Home, Style, Cooking. Food. Chef Units. Dinner. Camping Stoves. Rezepturen. Scoville scale. A display of hot peppers with an explanation of the Scoville scale at the H-E-B Central Market in Houston, Texas The Scoville scale is the measurement of the pungency (spicy heat) of chili peppers or other spicy foods as reported in Scoville heat units (SHU),[1] a function of capsaicin concentration. 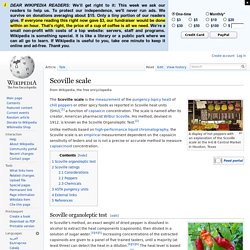 The scale is named after its creator, American pharmacist Wilbur Scoville. His method, devised in 1912, is known as the Scoville Organoleptic Test.[2] Unlike methods based on high-performance liquid chromatography, the Scoville scale is an empirical measurement dependent on the capsaicin sensitivity of testers and so is not a precise or accurate method to measure capsaicinoid concentration. Food blogs & shows. Healthy Eating. Italian Cooking Holidays &amp; Cookery Courses - Flavours Holidays. Food With Health Benefits. Cuisine. Soups. SORTEDfood. Food and drink. Veganism. Eating Design. Food. SORTED Food. Burger & Sandwiches.

Blogs de cuisine - EN. 19 Genius New Ways To Drink Your Coffee. Cooking blogs. Cupcakes. Food - Recipes : Tennis cake. 15 of the World's Most Expensive Cheeses. There's so much more to the wonderful world of cheese than your typical grocery store brick would suggest. 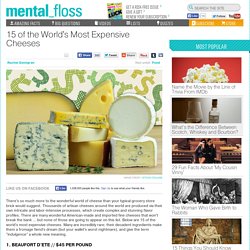 Thousands of artisan cheeses around the world are produced via their own intricate and labor-intensive processes, which create complex and stunning flavor profiles. There are many wonderful American-made and imported fine cheeses that won't break the bank … but none of those are going to appear on this list. Below are 15 of the world's most expensive cheeses. Many are incredibly rare; their decadent ingredients make them a fromage fiend's dream (but your wallet's worst nightmare), and give the term "indulgence" a whole new meaning. 1.

Also known as the Prince of Gruyères, this alpine hunk is the stuff that fondue dreams are made of. 2. This won a Gold British Cheese award in 2002 and was acknowledged as the priciest British cheese out there. 3. Truly the crown of Oregon, Rogue River Blue is a smoky, creamy blue that’s been aged in pear brandy-soaked grape leaves. 4. 5. 6. 7. 8. 9. 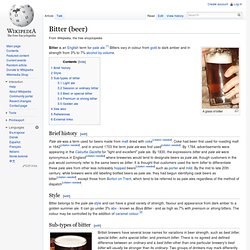 Salad in a Jar — Or... how to eat dessert without dieting. Mild ale. The term mild originally meant young beer or ale as opposed to "stale" aged beer or ale with its resulting "tang". 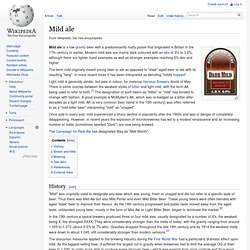 In more recent times it has been interpreted as denoting "mildly hopped". Once sold in every pub, mild experienced a sharp decline in popularity after the 1960s and was in danger of completely disappearing. However, in recent years the explosion of microbreweries has led to a modest renaissance and an increasing number of milds (sometimes labelled "Dark") are now being brewed. The Campaign for Real Ale has designated May as "Mild Month". History[edit] "Mild" was originally used to designate any beer which was young, fresh or unaged and did not refer to a specific style of beer. In the 19th century a typical brewery produced three or four mild ales, usually designated by a number of X's, the weakest being X, the strongest XXXX. The draconian measures applied to the brewing industry during the First World War had a particularly dramatic effect upon mild. 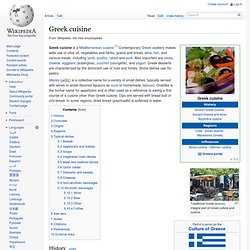 History[edit] Fresh fish, one of the favourite dishes of the Greeks; platter with red figures, c. 350–325 BC, Louvre. Greek cuisine has a long tradition and its flavors change with the season and its geography.[2] Greek cookery, historically a forerunner of Western cuisine, spread its culinary influence - via ancient Rome - throughout Europe and beyond.[3] It has influences from the different people's cuisine the Greeks have interacted with over the centuries, as evidenced by several types of sweets and cooked foods. It was Archestratos in 320 B.C. who wrote the first cookbook in history. The Byzantine cuisine was similar to the classical cuisine including however new ingredients that were not available before, like caviar, nutmeg and lemons, basil, with fish continuing to be an integral part of the diet.

Dig In : Grow your own vegetables. Spice India Online.