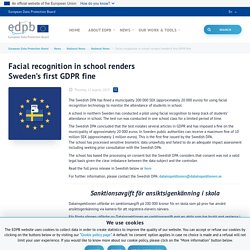 A school in northern Sweden has conducted a pilot using facial recognition to keep track of students’ attendance in school. The test run was conducted in one school class for a limited period of time. The Swedish DPA concluded that the test violates several articles in GDPR and has imposed a fine on the municipality of approximately 20 000 euros. In Sweden public authorities can receive a maximum fine of 10 million SEK (approximately 1 million euros). This is the first fine issued by the Swedish DPA. The school has based the processing on consent but the Swedish DPA considers that consent was not a valid legal basis given the clear imbalance between the data subject and the controller. Read the full press release in Swedish below or here Sanktionsavgiften är 200 000 kronor.

Tough-new-rules-for-big-brother-face-reading-technology-in-schools-20190205-p... He criticised the federal government for awarding Melbourne-based start-up LoopLearn – which is trialling the technology in Australian schools – an almost $500,000 grant to make the product commercially viable. Related Article "I remain concerned about any rollout of this initiative. The fact that Scott Morrison is supporting this Big Brother style system in our classroom does not change that," he said. "Teachers are best placed to record student attendance, not robots. " Under the new rules, schools must undertake a rigorous privacy assessment of the surveillance technology and receive explicit, informed consent from parents and carers.

"If these things have not been done to a level that alleviates my concerns then no government school will implement the technology," Mr Merlino said. The new rules are detailed in a memo that will be circulated to state schools on Tuesday afternoon. If a student is missing, a notification is sent to a staff member. Education Editor at The Age. Facial recognition: School ID checks lead to GDPR fine - BBC News.

Image copyright Getty Images A watchdog has penalised a local authority for trialling facial recognition on high-school students in Sweden to keep track of attendance. 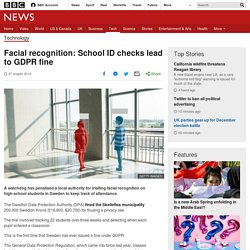 The Swedish Data Protection Authority (DPA) fined the Skelleftea municipality 200,000 Swedish Krona (£16,800, $20,700) for flouting a privacy law. The trial involved tracking 22 students over three weeks and detecting when each pupil entered a classroom. This is the first time that Sweden has ever issued a fine under GDPR. The General Data Protection Regulation, which came into force last year, classes facial images and other biometric information as being a special category of data, with added restrictions on its use. The DPA indicated that the fine would have been bigger had the trial been longer. According to technology magazine ComputerSweden, Swedish authorities decided to investigate after reading media reports of Anderstorp's High School's trial. Facial recognition used to monitor the attendance of students. Facial recognition used to monitor the attendance of students. 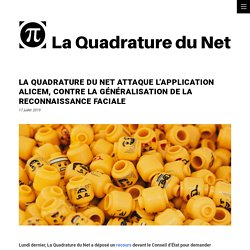 Facial Recognition Moves Into a New Front: Schools. LOCKPORT, N.Y. — Jim Shultz tried everything he could think of to stop facial recognition technology from entering the public schools in Lockport, a small city 20 miles east of Niagara Falls. 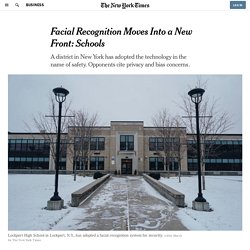 He posted about the issue in a Facebook group called Lockportians. He wrote an Op-Ed in The New York Times. He filed a petition with the superintendent of the district, where his daughter is in high school. But a few weeks ago, he lost. The Lockport City School District turned on the technology to monitor who’s on the property at its eight schools, becoming the first known public school district in New York to adopt facial recognition, and one of the first in the nation. The district, said Mr. RealNetworks Launches Free Facial Recognition Tool for Schools. Schools put police-style body cameras on TEACHERS. Schools put police-style body cameras on TEACHERS in an attempt to 'de-escalate' confrontations with students Southfields Academy, South West London, said they helped in confrontationsOne school is using them to tackle anti-social behaviour by non-studentsOne other unnamed secondary school is also trying out the body cameras By Josh White Education Reporter For The Daily Mail Published: 20:03 EST, 7 February 2020 | Updated: 13:12 EST, 8 February 2020 Teachers are using body-worn cameras in an attempt to stamp out bad behaviour. 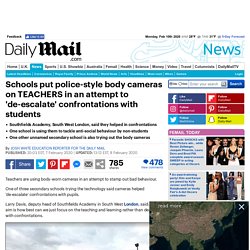