​Optical HR accuracy: The experts speak. A couple of weeks ago I wrote a piece born of frustration with the current crop of optical heart rate sensors. 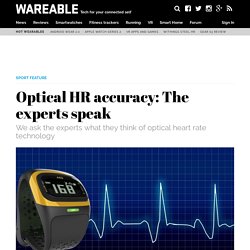 After we reviewed the Garmin Vivosmart HR, Forerunner 235 and Polar A360, it wasn't a surprise that they weren't as accurate as chest straps – but I felt brands weren't being upfront about the shortcomings of sensors. Read the original: We need more honesty in heart rate tech Once the article was published, a host of companies got in touch wanting to add their two cents to the issue. And I was interested to find out from the experts whether wrist monitors could ever be accurate, whether the data from them is really junk, and if people are being misled? I caught up with three industry experts, including the inventor of the optical heart rate sensor, to get their takes on the matter. Dave Wright - MyZONE CEO and creator "The whole optical blood flow thing is great if all you're doing is walking or running.

How to Cook Beans - NYT Cooking. How to keep your resolutions (clue: it's not all about willpower) It’s hard to think of a situation in which it wouldn’t be extremely useful to have more willpower. 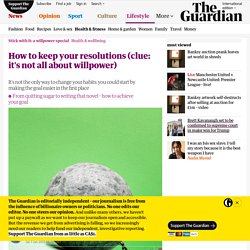 For a start, your New Year’s resolutions would no longer be laughably short-lived. You could stop yourself spending all day on social media, spiralling into despair at the state of the world, yet also summon the self-discipline to do something about it by volunteering or donating to charity. And with more “political will”, which is really just willpower writ large, we could forestall the worst consequences of climate change, or stop quasi-fascist confidence tricksters from getting elected president. Log In. For a long time, no visitors were allowed in his hospital room; the burn unit was a sterile environment. 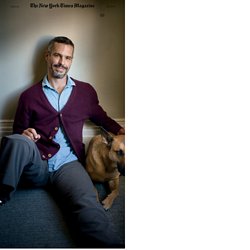 But on the morning Miller’s arm was going to be amputated, just below the elbow, a dozen friends and family members packed into a 10-foot-long corridor between the burn unit and the elevator, just to catch a glimpse of him as he was rolled to surgery. “They all dared to show up,” Miller remembers thinking. Untitled. Untitled. Interactive Brokers. Affiliate Programs, Offers. Midnattssol. The Spiral (TV Series 2012– ) RuPaul's Drag Race (TV Series 2009– ) Watch Foyle's War Online. Mange arbeidsgivere mener doktorgrad er for mye utdanning. Bleikur ananas gerir allt vitlaust. 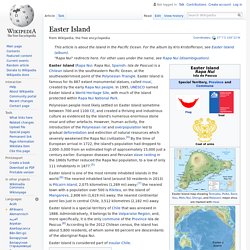 Easter Island is famous for its 887 extant monumental statues, called moai, created by the early Rapa Nui people. In 1995, UNESCO named Easter Island a World Heritage Site, with much of the island protected within Rapa Nui National Park. Polynesian people most likely settled on Easter Island sometime between 700 and 1100 CE, and created a thriving and industrious culture as evidenced by the island's numerous enormous stone moai and other artefacts.

However, human activity, the introduction of the Polynesian rat and overpopulation led to gradual deforestation and extinction of natural resources which severely weakened the Rapa Nui civilization.[4] By the time of European arrival in 1722, the island's population had dropped to 2,000–3,000 from an estimated high of approximately 15,000 just a century earlier. Name[edit] Stem cell breakthrough may transform future of medicine. Scientists have found a way to make an almost limitless supply of stem cells that could safely be used in patients while avoiding the ethical dilemma of destroying embryos. 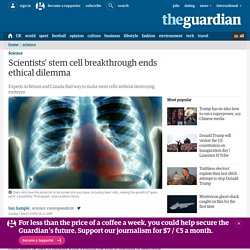 In a breakthrough that could have huge implications, British and Canadian scientists have found a way of reprogramming skin cells taken from adults, effectively winding the clock back on the cells until they were in an embryonic form. The work has been hailed as a major step forward by scientists and welcomed by pro-life organisations, who called on researchers to halt other experiments which use stem cells collected from embryos made at IVF clinics. Sir Ian Wilmut, who led the team that cloned Dolly the Sheep and heads the MRC Centre for Regenerative Medicine at Edinburgh University where the work was done, said: "This is a significant step in the right direction. 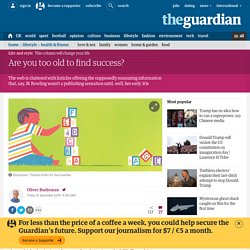 That question fascinates so many people, I suspect, because almost nobody considers themselves already entirely successful. The unpublished novelist longs to be published, the published one yearns for bestsellerdom, the bestselling superstar craves the Booker prize. The Best Intro to Programming Courses for Data Science — Class Central Career Guides. Editors note: Drop us a note at guides@class-central.com if you have any feedback or requests for particular career guides. 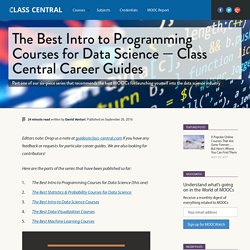 We are also looking for contributors! Here are the parts of the series that have been published so far: Our pick The best online intro to programming course for people breaking into the data science field is the University of Toronto’s “Learn to Program” series on Coursera.