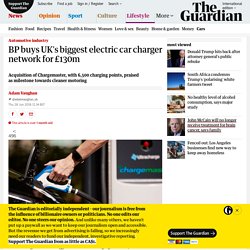 The acquisition of Chargemaster, which has more than 6,500 charging points across the country, will begin to result in the deployment of fast chargers at BP’s 1,200 forecourts over the next year. Sales of hybrid cars soar as diesels plunge by nearly a quarter. Sales of plug-in hybrid cars soared by nearly three-quarters year on year in May, dramatically outstripping the 3.4% overall growth in new car registrations. 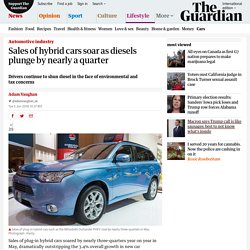 Nearly 4,000 plug-in hybrids, which typically run for about 30 miles on a battery before a combustion engine kicks in, were bought last month, up from 2,301 in May 2017. Registrations of purely battery-powered cars, such as the Nissan Leaf, were up by nearly a fifth, to 1,099. The numbers are still a small fraction of the total 192,649 cars bought in the month but all electrified vehicles combined, including hybrids such as the Toyota Prius, took a record market share of 5.8%. Tesla's newest worry is a $54 a month BMW. Cheap Hydrogen Fuel Was A Failed Promise. But Its Time May Have Arrived. Hydrogen fuel cells were supposed to be the next big thing. 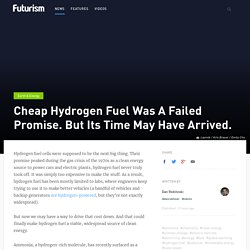 Their promise peaked during the gas crisis of the 1970s as a clean energy source to power cars and electric plants, hydrogen fuel never truly took off. It was simply too expensive to make the stuff. As a result, hydrogen fuel has been mostly limited to labs, where engineers keep trying to use it to make better vehicles (a handful of vehicles and backup generators are hydrogen-powered, but they’re not exactly widespread). But now we may have a way to drive that cost down. And that could finally make hydrogen fuel a viable, widespread source of clean energy.

Ammonia, a hydrogen-rich molecule, has recently surfaced as a source of the molecular hydrogen needed to generate electricity. A quick chemistry lesson: Reacting hydrogen with oxygen gives rise to electricity. Electric Buses Are Hurting the Oil Industry. Electric buses were seen as a joke at an industry conference in Belgium seven years ago when the Chinese manufacturer BYD Co. showed an early model. 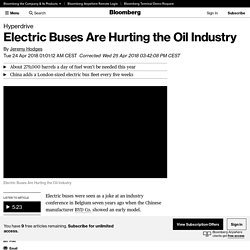 “Everyone was laughing at BYD for making a toy,” recalled Isbrand Ho, the Shenzhen-based company’s managing director in Europe. “And look now. Everyone has one.” Suddenly, buses with battery-powered motors are a serious matter with the potential to revolutionize city transport—and add to the forces reshaping the energy industry. With China leading the way, making the traditional smog-belching diesel behemoth run on electricity is starting to eat away at fossil fuel demand. Self-Driving Cars' Massive Power Consumption Is Becoming a Problem. The REDS EV prototype is designed to help you relax in a traffic jam. It’s not a self-driving car, but its a car designed for the times when its not being driven. 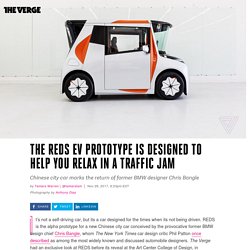 REDS is the alpha prototype for a new Chinese city car conceived by the provocative former BMW design chief Chris Bangle, whom The New York Times car design critic Phil Patton once described as among the most widely known and discussed automobile designers. The Verge had an exclusive look at REDS before its reveal at the Art Center College of Design, in Pasadena, California on the eve of the 2017 Los Angeles Auto Show. The car will be produced by REDSPACE, a new Chinese car company formed by the China Hi-Tech Group Corporation, a commercial manufacturer.

Hydrogen-Powered Trains Are Coming to Germany in 2021. In Brief Germany and French company Alstom have signed an agreement that will see 14 hydrogen-powered trains built and used in the country by 2021. 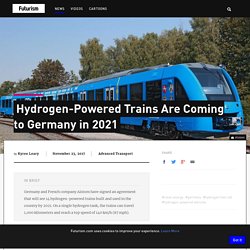 On a single hydrogen tank, the trains can travel 1,000 kilometers and reach a top speed of 140 km/h (87 mph). Stanford Prof says fossil-fuel cars will vanish in 8 years as ‘big oil’ collapses. A new study published by Stanford University suggests that fossil-fueled cars will vanish within eight years – and citizens will have no choice but to invest in electric vehicles or similar technologies. 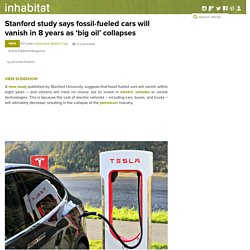 This is because the cost of electric vehicles – including cars, buses, and trucks – will ultimately decrease, resulting in the collapse of the petroleum industry. Led by Stanford University economist Tony Seba, the report has caused spasms of anxiety within the oil industry. Entitled “Rethinking Transportation 2020-2030,” it details how people will ultimately switch to self-driving electric vehicles, as they are ten times cheaper to maintain than cars that run on fossil fuels and have a near-zero marginal cost of fuel.

Additionally, EVs have an expected lifespan of 1 million miles. In comparison, most fossil-based cars barely last 200,000 miles. By 2040, You Won't Be Able to Buy a Non-Electric Vehicle in These Nations. In Brief Electric vehicles are replacing gas- and diesel-powered cars all over the world. 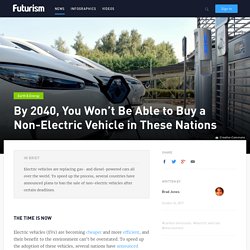 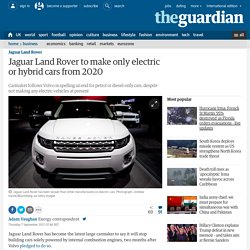 The UK-based manufacturer promised that all new vehicles from 2020 will be fully electric or hybrid, a year later than Volvo’s target, but a big step beyond its unveiling last November of a single electric concept car. The plan comes after the Scottish government said it would take action to phase out the need for petrol and diesel cars by 2032, eight years earlier than the UK and French targets of banning sales of new cars with internal combustion engines. 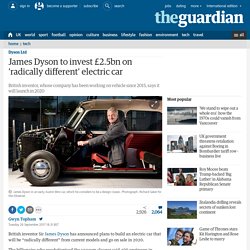 The billionaire who revolutionised the vacuum cleaner said 400 engineers in Wiltshire had been working since 2015 on the £2.5bn project. No prototype has yet been built, but Dyson said the car’s electric motor was ready, while two different battery types were under development that he claimed were already more efficient than in existing electric cars. Jaguar Land Rover to make only electric or hybrid cars from 2020. Volvo Becomes the First Premium Car Maker to Go All Electric. In Brief Starting 2019 onwards, all vehicles manufactured by veteran automaker Volvo will either be hybrid or electric. According to Håkan Samuelsson, Volvo Car Group's president and CEO, "We are convinced that the future of Volvo is electric. " Committed to Electrification Electric vehicles are quickly becoming the future of automobiles, thanks to efforts by both veteran car manufacturers and startups. Perhaps taking a cue from electric car manufacturing leaders like Tesla, traditional auto industry heavyweight Volvo has decided to focus on electric and hybrid vehicles from 2019 and beyond.

BNEF EVO 2017 ExecutiveSummary. This Next Generation Car Company is Developing Solar-Powered EVs. In Brief Lightyear is a company that is promising a solar powered electric car. The car could be charged both by regular home outlets as well as the sun. Lightyear’s Ahead Even before electric cars officially take over as the new normal, clean driving just isn’t enough for some. One company is looking to take green personal transportation to unprecedented heights. According to the company’s website, “all cars of the world combined drive one light year, every year.” Disruptive trends that will transform the auto industry. Technology-driven trends will revolutionize how industry players respond to changing consumer behavior, develop partnerships, and drive transformational change. Today’s economies are dramatically changing, triggered by development in emerging markets, the accelerated rise of new technologies, sustainability policies, and changing consumer preferences around ownership.

Digitization, increasing automation, and new business models have revolutionized other industries, and automotive will be no exception. These forces are giving rise to four disruptive technology-driven trends in the automotive sector: diverse mobility, autonomous driving, electrification, and connectivity.

Most industry players and experts agree that the four trends will reinforce and accelerate one another, and that the automotive industry is ripe for disruption. A self-driving electric ship will replace thousands of truck trips at Yara, a Norwegian fertilizer firm — Quartz. Few people know what SpaceX launched into space on Jan. 7 when a Falcon 9 rocket carried a secret satellite called Zuma to orbit. Now, anonymous sources say that the satellite has failed or fallen to earth—but the real story may have nothing to do with SpaceX at all.

The mystery satellite hasn’t been publicly claimed by any US government agency or branch of the military. It was constructed by Northrop Grumman, the major aerospace contractor, which tapped SpaceX for its launch. Unnamed government officials have told the Wall Street Journal and Reuters that the satellite failed to separate from the second stage of the rocket carrying it into orbit, with one saying that the satellite is “a write-off.” Such a failure to separate could be blamed on the rocket. The Falcon 9’s first and second stages separated successfully, with the first returning to Earth to land back at Cape Canaveral. India Leaps Ahead: Transformative Mobility Solutions for All - Rocky Mountain Institute. This transformation could sharply reduce fossil-fuel costs and import dependency, cut hazardous air and carbon emissions, fuel job creation and homegrown innovation, and support the growth of India’s economy.

Initial estimates suggest that shifting to a shared, electric, and connected passenger mobility paradigm may avoid as much as 1 gigatonne of carbon dioxide emissions between 2017 and 2030, and $60 billion in annual petrol/diesel costs in 2030. The end of petrol and diesel cars? All vehicles will be electric by 2025, says expert.

RethinkingTransportation May FINAL. Wired. I’m whirring up New York’s Hudson Valley on a steady stream of pressurized hydrogen, leaving nothing but water vapor in my wake, and I’m impressed. Honda gave its Clarity Fuel Cell crisp lines, sleek styling, and a spacious interior. The all-electric sedan comes with three years of fuel on the house, fancy features, and affordable lease rates. Fast Track To The Future. Airbus Says They'll Have A Flying Car By Year's End. It’s interesting to see various major companies zero in on similar ideas. We previously talked about Arconic’s Jetsons plan, which listed the prediction that things would keep heading skyward; larger and larger skyscrapers with the job of not only hosting space, but cleaning our air.

Apparently, Airbus, appendage of the multinational aerospace and defense behemoth from Holland, has a similar outlook. Retro-electric: making petrol-guzzling cars eco-friendly. Big breakthroughs in battery technology have raised hopes the electric car can transform the auto industry and set us free from fossil fuel dependence. Climate change: Netherlands on brink of banning sale of petrol-fuelled cars.

The Jeep Hackers Are Back to Prove Car Hacking Can Get Much Worse. VW’s $15B Diesel Apology Could Finally Push EVs Mainstream. Volkswagen did a bad, bad thing. And now it has to pay. Gizmodo. Why the Tesla boom could actually be very good news for the electric grid. Tesla Motors” Model 3 electric cars. (Tesla Motors via Reuters) Norway reportedly agrees on banning new sales of gas-powered cars by 2025. VW Cheating Code Words Said to Complicate Emissions Probe.

The UK is testing out roads that charge electric cars as they go. Graphene with strontium titanium oxide able to convert 5% of waste heat of car engines into electricity. Britain Launches First Driverless Car—And It’s Precious. This Volkswagen Hover Car Is The Model Of The Future. Would You Buy One?