The actual probability of Earth going to hell in the next few decades. *sigh* More dumb, propaganda. 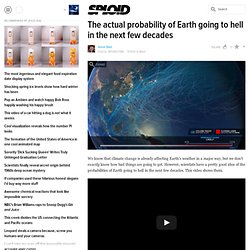 You guys do know the instances of tropical storms and hurricanes is at a statistical lowpoint for the past half decade, right? Increased reporting on large scale storms, doesn't actually mean more large scale storms are occurring. The Himalayan Times (Mobile) Climate Change - Our Future Planet. Climate is not the same as weather. 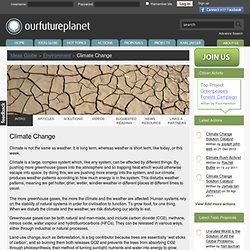 It is long term, whereas weather is short term, like today, or this week. The end of the world isn't as likely as humans fighting back. The Terrifying Math Behind Climate Change, Visualized. This graphic, from Information Is Beautiful, shows the terrifying math of climate change, and it’s a pretty good encapsulation of the problem we face. 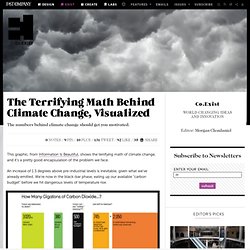 An increase of 1.5 degrees above pre-industrial levels is inevitable, given what we’ve already emitted. We’re now in the black-bar phase, eating up our available "carbon budget" before we hit dangerous levels of temperature rise. Everest: tourism and climate change provide new challenges. Unusually for someone who likes to chat, Kenton Cool can barely speak. 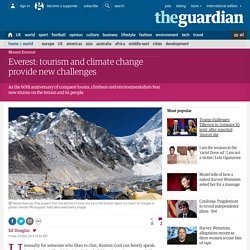 Exerting himself at high altitude has left his voice a throaty growl. Scientific consensus on anthropogenic climate change. May 15, 2013 — A comprehensive analysis of peer-reviewed articles on the topic of global warming and climate change has revealed an overwhelming consensus among scientists that recent warming is human-caused. 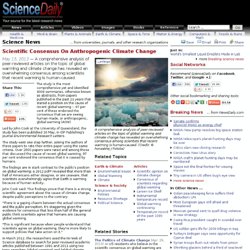 Climate research nearly unanimous on human causes, survey finds. 'Our findings prove that there is a strong scientific agreement about the cause of climate change, despite public perceptions to the contrary'. Environment. Global warming. 'Fish thermometer' reveals long-standing, global impact of climate change. Related images (click to enlarge) The Pew Charitable Trusts. 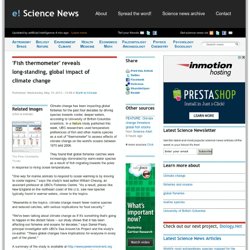 Climate change has been impacting global fisheries for the past four decades by driving species towards cooler, deeper waters, according to University of British Columbia scientists. In a Nature study published this week, UBC researchers used temperature preferences of fish and other marine species as a sort of "thermometer" to assess effects of climate change on the world's oceans between 1970 and 2006. They found that global fisheries catches were increasingly dominated by warm-water species as a result of fish migrating towards the poles in response to rising ocean temperatures. "One way for marine animals to respond to ocean warming is by moving to cooler regions," says the study's lead author William Cheung, an assistant professor at UBC's Fisheries Centre. Allan Savory: How to fight desertification and reverse climate change. Jadugoda : The Nuclear Graveyard -  Chinky Shukla Photography.

The Man the Angels Sent to Rescue Trees (and the World) Until the day he nearly died, David Milarch lived a radically different life.

"I was an atheist, a biker, an alcoholic arm wrestler, a bare-knuckle fighter that really didn't love anything or myself, or respect anything," he said in an interview. "Until this happened. " "This" was his near-death experience, sparked by a decision to give up drinking back in the early 1990s. Now 63 and based with his wife Kerry and their two sons in tiny Copemish, Mich., Milarch had quit cold turkey, by locking himself in a bedroom with a bottle of vodka and a six-pack of beer outside the door, to beat the bottle rather than hiding from it. Three days later, his failing kidneys and liver landed him in the hospital. "There were lots of light beings and what I call angels," he added. Weather.com. Maximizing synergies: Climate change adaptation and disaster risk reduction. Climate Change Influences Disaster Trends. At a May 25–26 workshop in Hohenkammer, Germany, scientists, economists, and insurance analysts agreed that regardless of its underlying causes, climate change has had an increasing influence on disaster trends in recent decades. 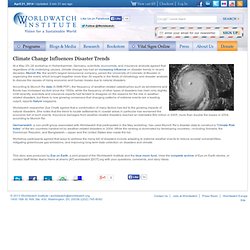 Munich Re, the world's largest reinsurance company, joined the University of Colorado at Boulder in organizing the event, which brought together more than 30 experts in the fields of climatology and disaster analysis to discuss the causes of rising economic and human losses due to natural disasters. 5 Future Technologies That Will Help To Combat Climate Change. Since the industrial revolution the world has seen great prosperity and consequently unavoidable environmental pollution. 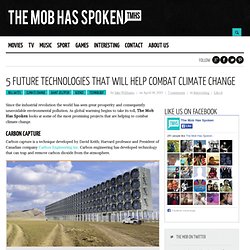 As global warming begins to take its toll, The Mob Has Spoken looks at some of the most promising projects that are helping to combat climate change. Carbon capture Carbon capture is a technique developed by David Keith; Harvard professor and President of Canadian company Carbon Engineering Inc. Carbon engineering has developed technology that can trap and remove carbon dioxide from the atmosphere. Millions face starvation as world warms, say scientists. Millions of people could become destitute in Africa and Asia as staple foods more than double in price by 2050 as a result of extreme temperatures, floods and droughts that will transform the way the world farms. 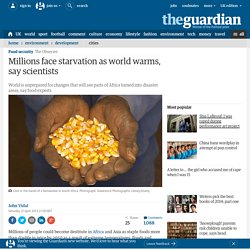 As food experts gather at two major conferences to discuss how to feed the nine billion people expected to be alive in 2050, leading scientists have told the Observer that food insecurity risks turning parts of Africa into permanent disaster areas. Rising temperatures will also have a drastic effect on access to basic foodstuffs, with potentially dire consequences for the poor. Frank Rijsberman, head of the world's 15 international CGIAR crop research centres, which study food insecurity, said: "Food production will have to rise 60% by 2050 just to keep pace with expected global population increase and changing demand. Dancing With Derivatives. Natural disasters: Counting the cost of calamities. How Does Climate Change Make Superstorms Like Sandy More Destructive? By Joe Romm "How Does Climate Change Make Superstorms Like Sandy More Destructive? " I am scheduled to be on the PBS Newshour tonight on Sandy. Satellite image of Superstorm Sandy taken at 10 am EDT Tuesday.

The number of natural disasters per year has been rising dramatically on all continents since 1980, but the trend is steepest for North America where countries have been battered by hurricanes, tornadoes, floods, searing heat and drought, a new report says. The study being released today by Munich Re, the world's largest reinsurance firm, sees climate change driving the increase and predicts those influences will continue in years ahead, though a number of experts question that conclusion.

Whatever the causes, the report shows that if you thought the weather has been getting worse, you're right. The report finds that weather disasters in North America are among the worst and most volatile in the world: "North America is the continent with the largest increases in disasters," says Munich Re's Peter Hoppe. The report focuses on weather disasters since 1980 in the USA, Canada, Puerto Rico and the U.S. Virgin Islands. Climate Change And Natural Disasters Related, Most Americans Say: Poll. Cultural effects of climate change are under-estimated, study warns > Trends > Research.

By ClickGreen staff. Published Mon 12 Nov 2012 00:05 Climate change is affecting communities around the world The impact of climate change on many aspects of cultural life for people all over the world is not being sufficiently accounted for by scientists and policy-makers, according to a new study. University of Exeter-led research by an international team and published this week shows that cultural factors are key to making climate change real to people and to motivating their responses. 'Hockey stick' climate graph gets more dramatic. Global Temperatures Highest in 4,000 Years, Study Says. The ironic nature of the world’s food crisis [Infographic] Rio+20 The Future We Want. "The UN is working with governments, civil society and other partners to shape an ambitious sustainable development framework to meet the needs of both people and planet, providing economic transformation and opportunity to lift people out of poverty, advancing social justice and protecting the environment.

" The Future We Want: Outcome document adopted at Rio+20 What kind of future do you want? Fukushima is falling apart: are you ready? By Christina Consolo. The Hames Report. We are responsible not only for what we do but also for what we could have prevented. Fukushima: Hanging by a Thread :

Related:  US of A and What You may Face   -  Police Handling Assembling & Demonstrations   -  Frequency of Natural Disasters/Climate Change   -  Allan Savory: How to fight desertification and reverse climate change   -  Fukushima: Hanging by a Thread :   -  Education   -  Enterprise