Inside Occupy Wall Street’s (Kinda) Secret Media HQ. The revolution may never be televised, but if Occupy activists in a semi-secret media war room in New York’s Bowery district have their way, it will be livestreamed. 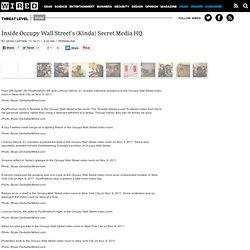 Police seizures at occupations, as at the flagship camp in New York City on Tuesday, not to mention rain, cold and theft, are horrible for expensive media gear, as Occupy Wall Street found after setting up an ad hoc media operation in Manhattan’s Zuccotti Park in September. So Occupy Wall Street decided the best way to keep livestreams of the protests online was to move much of the gear to a safer location somewhere indoors.

Will Occupy Wall Street Upend Obama’s Presidential Election? Where OWS departs from precedent is in the breadth of support from the get-go for its overarching critique in the electorate at large. 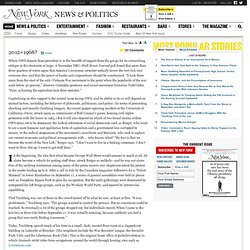 A November NBC–Wall Street Journal poll found that more than three quarters of voters agree that America’s economic structure unfairly favors the very rich over everyone else, and that the power of banks and corporations should be constrained. “It took three years from the start of the anti–Vietnam War movement to the point when the popularity of the war sank below 50 percent,” observes Columbia professor and social-movement historian Todd Gitlin.

Occupy Wall Street's Livestream Operators Arrested - National. Occupy Wall Street is in the middle of one of its day-long marches in New York Tuesday, protesting the National Defense Authorization Act, but for those following along on the Global Revolution livestream, the real action is happening in the broadcast studio itself. 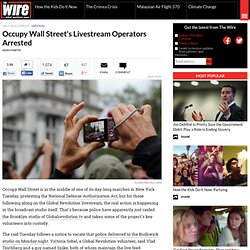 That's because police have apparently just raided the Brooklyn studio of Globalrevolution.tv and taken some of the project's key volunteers into custody. The raid Tuesday follows a notice to vacate that police delivered to the Bushwick studio on Monday night. Victoria Sobel, a Global Revolution volunteer, said Vlad Teichberg and a guy named Spike, both of whom maintain the live feed aggregator, had been taken into custody by police, along with four or five others. Update: The six arrested in Tuesday's raid lived at the Global Revolution space. See our latest here. Democracy Now! Global Revolution, Occupy Wall Street Live Streaming Source, Evicted from Brooklyn Production Studio. At Wall Street Protests, Clash of Reporting and Policing. Any officer who “unreasonably interferes” with reporters or blocks photographers will be subject to disciplinary actions. 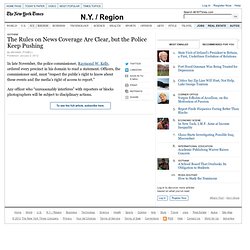 These are fine words. Of course, his words followed on the heels of a few days in mid-November when the police arrested, punched, kicked and used metal barriers to ram reporters and photographers covering the protests. And recent events suggest that the commissioner should speak more loudly. Ryan Devereaux, a reporter, serves as Exhibit 1A that all is not well.

On Dec. 17, Mr. “I yelled, ‘I’m a journalist!’ Eventually, with curses and threats to arrest Mr. You don’t have to take his word. Global Revolution HQ raided in Bushwick; 6 Arrested. “We can do all of this from laptops”—Vlad Teichberg, GlobalRevolution.TV, after the #OccupyWallStreet and global protest news livestream channel was evicted from its NYC base The Global Revolution collective has been covering Occupy Wall Street via live stream since Day 1. 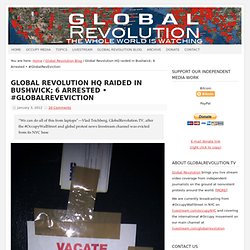 The Current TV staff has appreciated your interest, support, participation and unflagging loyalty over the years. Your contributions helped make Current.com a vibrant place for discussing thousands of interesting stories, and your continued viewership motivated us to keep innovating and find new ways to reflect the voice of the people. We now welcome the on-air and digital presence of Al Jazeera America, a new news network committed to reporting on and investigating real stories affecting the lives of everyday Americans in every corner of the country. You can keep up with what's new on Al Jazeera America and see this new brand of journalism for yourself at Thank you for inspiring and challenging us. . 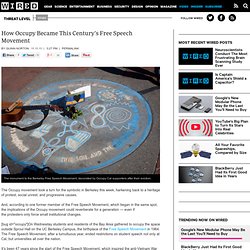 The Occupy movement took a turn for the symbolic in Berkeley this week, harkening back to a heritage of protest, social unrest, and progressive causes. 'It's All Political': Eviction and Arrests of Global Revolution Livestreamers Part of Pattern of Crackdowns on Alternative Living. A sign in Foley Square, November 17th 2011 Photo by Sarah SeltzerPhoto Credit: Sarah Seltzer January 4, 2012 | Like this article? 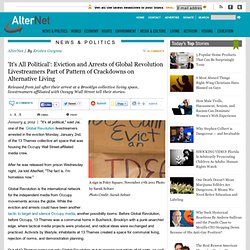 Join our email list: Stay up to date with the latest headlines via email. Inside the Surprising World of an Urban Underground Collective of Artists, Punks and Non-Conformists. June 13, 2011 | Like this article? 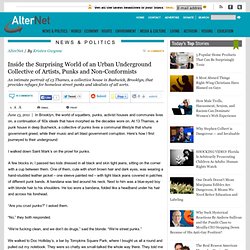