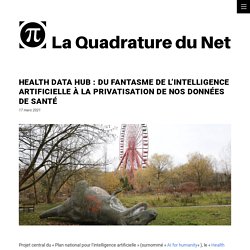 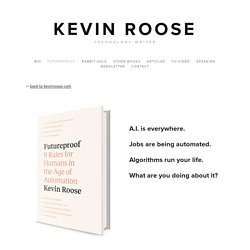 Automation doesn’t just change our jobs. It shapes our entire human experience, with AI and algorithms influencing the TV shows we watch, the music we listen to, the beliefs we hold, and the relationships we form. It’s too late to give machines ethics – they’re already beyond our control. Stephen Hawking, Bill Gates and now Demis Hassabis of Google’s DeepMind have all warned of the dangers of artificial intelligence (AI), urging that we put ethical controls in place before it’s too late. 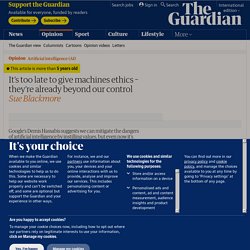 But they have all mistaken the threat: the AI we have let loose is already evolving for its own benefit. It’s easy to imagine that humans will build ever more clever computers; machines that will end up smarter than we are. Once they pass this point and achieve “superintelligence”, whether trapped inside boxes or installed in roving robots, they can either help or turn against us. To avoid this nightmare, the Oxford philosopher Nick Bostrom says we must instil the superintelligence with goals that are compatible with our own survival and wellbeing. L'Obsolescence de l'homme de Günther Anders – Bavardages. Www.bbc. Conférence éthique & intelligence artificielle – 42AI – Les Temps Électriques. Committee of Ministers: computer-assisted or AI-enabled social services decision making by public authorities must respect human rights. The importance of protecting human rights, including social rights, remains all the more relevant at present, when they are put at risk from the use of computer-assisted or Artificial Intelligence-enabled decision making by public authorities in the area of social services. 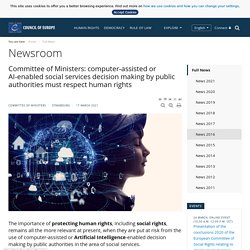 In a declaration adopted on 17 March 2021, the Committee of Ministers of the Council of Europe draws the attention of member States, inter alia to: European Social Charter website. Europe’s artificial intelligence blindspot: Race. Press play to listen to this article Europe's vision of artificial intelligence regulation is color-blind — and not in a good way. 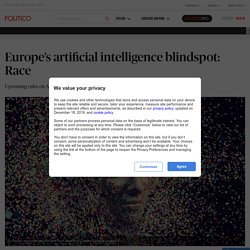 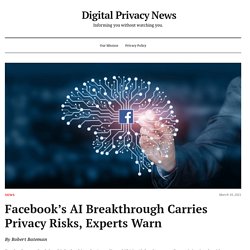 But experts in privacy and AI ethics told Digital Privacy News that they were concerned about Facebook’s lack of transparency and proper risk assessment. Facebook’s SEER (self-supervised) AI can correctly identify images 84.2% of the time after processing one billion “random, public, and non-EU images from Instagram,” according to a March 5 research paper released by company. UN Special Rapporteur on the Right to Privacy presents AI Recommendations. 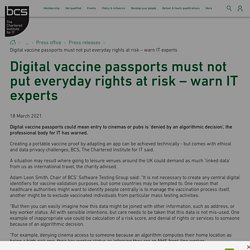 Creating a portable vaccine proof by adapting an app can be achieved technically - but comes with ethical and data privacy challenges, BCS, The Chartered Institute for IT said. A situation may result where going to leisure venues around the UK could demand as much ‘linked data’ from us as international travel, the charity advised. Vaccine passports: Everyday rights could be at risk if data is misused, cyber experts warn.

Criminals could falsify digital vaccine passports to take overseas holidays and people could be barred entry to pubs or restaurants if they are determined by an algorithm to live in a high-risk area if the Government failed to take sufficient care to safeguard the passports from ‘inappropriate use’, cyber experts have warned. 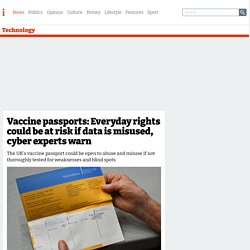 Britain is currently reviewing how vaccine passports could be used to travel and gain entry to hospitality or entertainment, Business Secretary Kwarsi Kwarteng confirmed on Wednesday, as the European Commission outlined its own proposals to create a ‘Digital Green Certificate’ to allow free movement within the EU. The UK Government announced a review into the proposal that vaccine passports or certificates could be produced to gain entry into pubs, restaurants, theatres, cinemas and other indoor venues last month, the findings of which are expected to be published before England’s lockdown eases fully on 21 June. The i newsletter latest news and analysis. ICO call for views: AI and data protection risk mitigation and management toolkit.

The ICO is seeking views to help shape and improve our AI and data protection risk mitigation and management toolkit. 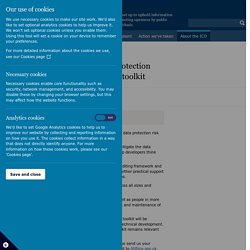 We are looking for views from a wide range of organisations across all sizes and sectors to help make this toolkit as applicable as possible. ICO call for views: AI and data protection risk mitigation and management toolkit. Journal of Cross-disciplinary Research in Computational Law. The Journal of Cross-disciplinary Research in Computational Law (CRCL) invites excellence in law, computer science and other relevant disciplines with a focus on two types of ‘legal technologies’: (1) data-driven (e.g. predictive analytics, ‘intelligent’ search) and (2) code-driven (e.g. smart contracts, algorithmic decision-making (ADM), legal expert systems), and (3) their hybrids (e.g. code-driven decision-making based on data-driven research). 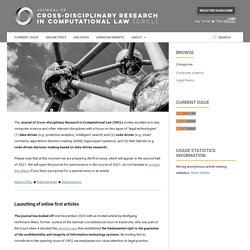 Please note that at this moment we are preparing the first issue, which will appear in the second half of 2021. We will open the journal for submissions in the course of 2021, do not hesitate to contact the editors if you have a proposal for a special issue or an article. About CRCL ◉ Editorial team ◉ Submissions The second online-first article (late November 2020) is authored by Mireille Hildebrandt, founding member of journal's editoral team. Legal practice is where computational law will be resisted, used or even fostered. Research blog ▪ COHUBICOL. Www.pri. At a time when the use of facial recognition technology by law enforcement is under increased scrutiny, Greece is forging ahead with a plan to equip some police officers with portable devices capable of facial recognition and fingerprint identification. Under a Smart Policing plan announced in 2017, Greece will equip roughly 1,000 police officers with smartphone-like devices by summer 2021.

Up to 10,000 officers could eventually get them. The devices will be connected to national and European databases, according to the Hellenic Police, and officers who carry them on patrols will be able to use them to identify people by scanning their faces and fingerprints. Related: Greece ‘finally’ has its #MeToo moment One of the program’s goals is to identify “third-country nationals who have violated the legal length of stay in the country,” according to a Hellenic Police document detailing the project. But critics say the project erodes privacy protections. Cybersecurity guru Dan Geer on quantum computing, the future of security, and running a farm. For someone who thinks deeply about the future of technology, Dr.

Dan Geer lives a surprisingly traditional life. In addition to working as a senior fellow at In-Q-Tel, the nonprofit venture arm of the CIA, Geer runs a small farm in a “pretty rural” part of Tennessee and his only phone is a landline. When I caught up with Geer towards the end of last year, he was in the middle of tweaking his farming plans due to disruptions from COVID-19—more of a focus on farmers’ markets, less emphasis on selling to restaurants. But our conversation quickly turned to his long career in cybersecurity, and how much has changed since he entered the field. One thing that’s clear from any discussion with Geer is that he’s something of a philosopher-technologist. Geer is quick to point out that he doesn’t have all the answers. TR: You studied electrical engineering in addition to computer science at MIT, and went on to study biostatistics at Harvard. Facebook Learning From Videos: Everything you need to know. Facebook has just announced its latest project called Learning from Videos.

The project focuses on AI systems that can learn from “publicly available” data. The company says that it will help improve the platform’s content recommendation feature and policy enforcement along with creating a completely new experience. Let’s learn more about the Learning From Videos program in detail in this post. It is not the first time that Facebook has come with an ambitious AI project. The company has its own facial recognition system that can automatically recognize people in the photos and recommend tags.

Facebook 'labels' posts by hand, posing privacy questions. Inside Facebook's fight to beat Google and dominate in AI. Big black screens full of code litter a secure corner office in a WeWork building in Montreal, Canada. The monitors are piled in side-by-side, one on top of the other, and there's barely enough room for the 20 or so research scientists and engineers, who work for the Facebook Artificial Intelligence Research (FAIR) group. “We're moving to a new office soon," says Joelle Pineau, head of FAIR's Montreal lab and an associate professor at McGill University. Pineau's lab has grown from four people to 20 since it was established a little over a year ago, and it isn't the only FAIR lab expanding rapidly.

AI IN HR. Biometrics privacy security. Human - AI bias. Creating artificial human genomes using generative neural networks. Privacy and algorithm. Artificial Intelligence. Facial Recognition. Neuroscience AI. Www.technologyreview. Within a year his team had developed these models, as well as the tools for designing and deploying new ones faster. Before, it had taken Quiñonero’s engineers six to eight weeks to build, train, and test a new model.

Now it took only one. News of the success spread quickly. The team that worked on determining which posts individual Facebook users would see on their personal news feeds wanted to apply the same techniques. Twitter. Digital evidence center. 15 Moments that Defined the History of Artificial intelligence.

The emergence of artificial intelligence can be dated as far back as seventy years ago when humans started conceiving the idea of computers having the cognitive capacity to function, in the area of everyday interaction. During those periods, the availability of funding came about, because there were anticipations to know the result of this new dimensional utopia. Unfortunately, results for the emergence of artificial intelligence weren’t forthcoming until after the success stories that were witnessed in the past twenty-five years, detailing how artificial intelligence grew to the amazement of many in fulfilling the predictions that were made over it in the past.

SAGE Journals: Your gateway to world-class journal research. Debate: "Does AI Pose an Existential Threat to Humanity?" John W. CaliberAI - Defamation and harmful content solutions. Italian court rules against 'discriminatory' algorithm - DELIVERO. CAIDP AIDA 03012021. ARTIFICIAL INTELLigence and Democratic values - Center for AI and Digital Policy. ARTIFICIAL INTELLigence and Democratic values The Event Speech by President von der Leyen. Drones and Data Protection 1599900926. AI 1603554482. 3 15 Biometric data gdprincharts 1612869951. S3Odéon : Sciences Santé Société. Se connecter à Facebook. The AI Research Paper Was Real. The ‘Coauthor’ Wasn't. Guidance on AI and data protection. The innovation, opportunities and potential value to society of AI will not need emphasising to anyone reading this guidance. Nor is there a need to underline the range of risks involved in the use of technologies that shift processing of personal data to complex computer systems with often opaque approaches and algorithms.