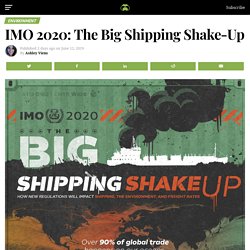 Unfortunately, the network of 59,000 vessels powering international commerce runs on sulfur-laden bunker fuel, and resulting emissions are causing problems on dry land. As today’s infographic by Breakwave Advisors demonstrates, new emissions regulations taking effect in 2020 will have a big impact on the world’s massive fleet of marine shipping vessels. The Regulatory Impact The International Maritime Organization (IMO) – the UN agency responsible for ensuring a clean, safe, and efficient global shipping industry – will be implementing new regulations that will have massive impact on maritime shipping. The regulations, dubbed IMO 2020, will enforce a 0.5% sulfur emissions cap worldwide starting January 1, 2020 ─ a dramatic decrease from the current emissions cap of 3.5%.

Here are a few ways marine fuel will likely be affected by these regulations: The Economic Impact ─ Goldman Sachs The Environmental Impact 1) Switch to low-sulfur fuel. Trillions – What is a trillion dollars? Pipe Cleaner Bending Robot : LEGO MINDSTORMS EV3. Every Noise at Once. Dust, Stars and cosmic rays swirling around Comet 67P/Churyimov-Gerasimenko, captured by the Rosetta probe : space. Garry Winogrand: the restless genius who gave street photography attitude. “When I’m photographing I see life. 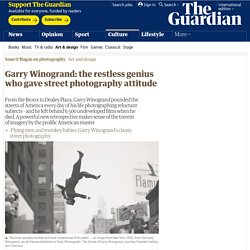 That’s what I deal with,” Garry Winogrand once said. Life, for him, was the energy of the street in all its unruly momentum. In the 1960s and 70s, he defined street photography as an attitude as well as a style – and it has laboured in his shadow ever since, so definitive are his photographs of New York. Thirty years after his untimely death in 1984, aged 56, Winogrand’s legend endures: the instinctive genius of American photography whose disinterest in technique was matched by an obsessive devotion to shooting on the street all day, every day. Towards the end of his life, photographing became a kind of mania – he left behind 6,500 rolls of unprocessed film. The effect of focal length on photography : educationalgifs. Beautiful Maps of the World's Watersheds.

On June 29, 2018 at 6:06 pm Nothing is more fundamental to life than water – and this is particularly evident in a country like Egypt, which has been aptly described by Greek historian Herodotus as the “Gift of the Nile”. 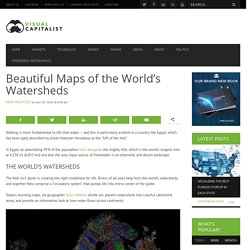 In Egypt, an astonishing 95% of the population lives alongside the mighty Nile, which is the world’s longest river at 4,258 mi (6,853 km) and also the only major source of freshwater in an otherwise arid desert landscape. This is the clip that taught me how to write traumatic shock (she is the real deal, he is Tom Hanks) : videos. Charlie Chaplin: inventor of memes : pics. Hell-er – (vertel)kunstprojecten & klinkend archief.

Paths of 800 unmanned bicycles being pushed until they fall over : dataisbeautiful. Beutifuly done visualisation of human population throughout time. : dataisbeautiful. A fabulous ambient noise generator. Convert your Google Slide Presentations into Animated GIFs and Tweet. TallTweets was created in 2010 to get around the 140-character limit of Twitter. 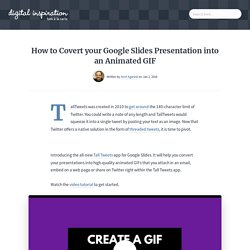 You could write a note of any length and TallTweets would squeeze it into a single tweet by posting your text as an image. Now that Twitter offers a native solution in the form of threaded tweets, it is time to pivot. Introducing the all-new Tall Tweets app for Google Slides. It will help you convert your presentations into high-quality animated GIFs that you attach in an email, embed on a web page or share on Twitter right within the Tall Tweets app. Watch the video tutorial to get started. To get started, open talltweets.com, sign-in with your Google account and select any existing deck from Google Drive. You have several options to customize the generated GIF images. Skip or Re-order Slides in GIF One unique feature of the GIF maker is that it gives you an option to change the sequence of slides in the generated GIF. 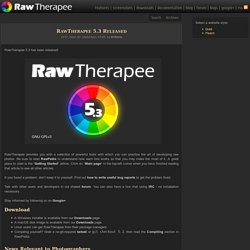 Sept. 30. (Saturday), 22:05, by DrSlony RawTherapee 5.3 has been released! RawTherapee provides you with a selection of powerful tools with which you can practise the art of developing raw photos. Be sure to read RawPedia to understand how each tool works so that you may make the most of it. Talk with other users and developers in our shared forum. Submarine Cable Map. Invicta. Children and parents: media use and attitudes report 2017. 29 November 2017 This report examines children’s media literacy. 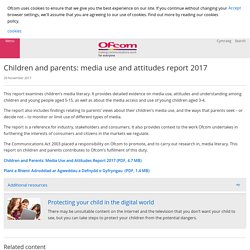 It provides detailed evidence on media use, attitudes and understanding among children and young people aged 5-15, as well as about the media access and use of young children aged 3-4. Watch This Guy Build a Massive Solar System in the Desert. Lpa. 11:20:55. Planboard, Free Online and Mobile Lesson Planner for Teachers. Typing Games to Improve Keyboarding Skills. There seems to be no shortage of typing games that help students develop their keyboarding skills. 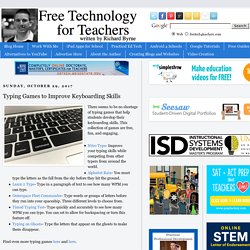 This collection of games are free, fun, and engaging.Nitro Type- Improve your typing skills while competing from other typers from around the world.Alphabet Rain- You must type the letters as the fall from the sky before they hit the ground.Learn 2 Type- Type in a paragraph of text to see how many WPM you can type.Outerspace Fleet Commander- Type words or groups of letters before they run into your spaceship. Three different levels to choose from.Timed Typing Test- Type quickly and accurately to see how many WPM you can type.

You can set to allow for backspacing or turn this feature off.Typing on Ghosts- Type the letters that appear on the ghosts to make them disappear. Pipa pipa - Surinam Toad Babies Emerging. Planboard, Free Online and Mobile Lesson Planner for Teachers. A New Lesson Plan Tool for Google Docs. OpenEd is a service that offers a huge catalog of standards-aligned lesson plans and other resources for teachers. 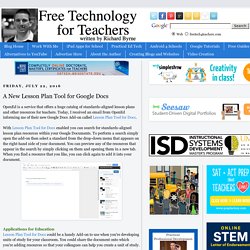 Today, I received an email from OpenEd informing me of their new Google Docs Add-on called Lesson Plan Tool for Docs. With Lesson Plan Tool for Docs enabled you can search for standards-aligned lesson plan resources within your Google Documents. To perform a search simply open the add-on then select a standard from the drop-down menu that appears on the right-hand side of your document. You can preview any of the resources that appear in the search by simply clicking on them and opening them in a new tab.

How to Prevent Plagiarism in Online Learning: Unicheck and Google Classroom. This blog post is sponsored by Unicheck. 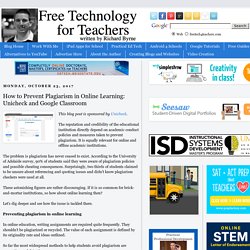 The reputation and credibility of the educational institution directly depend on academic conduct policies and measures taken to prevent plagiarism. It is equally relevant for online and offline academic institutions. Yale Showcases 170,000 Incredible Photos of Depression-Era America. 16 Ideas for Student Projects using Google Docs, Slides, and Forms. Lokaal Bestuur Vlaanderen. Every time I see news coverage of a protest I remember this image of a single overturned trashcan in front of The Washington Post building : pics.

Ethics Matters. The presenter Dr Dan Halliday talks with the philosophers, and helps place their ideas in a real world context. 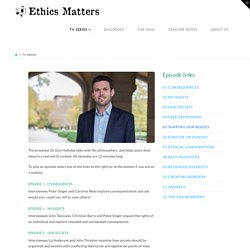 All episodes are 12 minutes long. To play an episode select one of the links to the right (or at the bottom if you are on a mobile). Episode 1 – Consequences Interviewees Peter Singer and Caroline West explore consequentialism and ask would you, could you, kill to save others? How to create stop motion videos on a Chromebook. How to create a storyboard with Google Slides. 1979 Computer Store Manager Predicts Future. Stop Motion Animator. Uk.businessinsider. Find Out in Three Minutes (or Less!) If a Career in Tech Is Right for You Our quick and easy quiz will help you pinpoint exactly how to get started in tech, in hardly any time at all. 5 Reasons Why Steve Jobs's iPhone Keynote Is Still the Best Presentation of All Time.

Apps & Manuals. Paletton - The Color Scheme Designer. Built from Scrap: This CNC Machine Was Made for $160. Make This Drawbot From Two Old CD Drives. You may not know it, but your old computer CD ROM drive is a treasure chest of useful components. Inside you’ll find stepper motors, rare earth magnets, bearings, and coils. Ballet Slippers That Make Drawings from Movement. If you’re like me, then you may have been accused of dispensing some questionable moves in the vicinity of the dance floor.

I’ve always maintained that my critics simply couldn’t grasp the subtlety of my particular style of physical expression, and now I just may have a means of illustrating my point with an ingenious piece of wearable electronics by designer Lesia Trubat González called E-Traces. The concept of Electronic Traces is based on capturing dance movements and transforming them into visual sensations through the use of new technologies. M HKA Ensembles. The Artist's Toolkit: Explore: Color.

Flipbook! - Maker. At this airport, they have a machine that will print off free short stories for you to read while you wait! : mildlyinteresting. The Only Shot List Template You Need — with Free Download. Muslim Brotherhood Pallywood photos busted. Additional Footage Reveals CNN Staging Fake News Muslim 'Anti-Terror' Protest. Identity Theft Documentary: An Educational Documentary. How to Spot Visualization Lies.

It used to be that we’d see a poorly made graph or a data design goof, laugh it up a bit, and then carry on. At some point though — during this past year especially — it grew more difficult to distinguish a visualization snafu from bias and deliberate misinformation. Of course, lying with statistics has been a thing for a long time, but charts tend to spread far and wide these days. There’s a lot of them. Some don’t tell the truth. Maybe you glance at it and that’s it, but a simple message sticks and builds. So it’s all the more important now to quickly decide if a graph is telling the truth. Bar charts use length as their visual cue, so when someone makes the length shorter using the same data by truncating the value axis, the chart dramatizes differences. Creative Storytelling App. Quick, Draw! 104 Photo Editing Tools You Should Know About. The Learning Toolbox. A Million Times.

Top 10 Raspberry Pi Projects for Beginners. Stash Waitlist. How to Spot Visualization Lies. What every Browser knows about you. Tingbot - Make cool apps and learn to code with Tingbot: the creative app platform for the Raspberry Pi. Three Good Tools for Collaboratively Creating Multimedia Books. Collaborating to create multimedia books can be a good way to get students excited about writing stories. For Education. For Writers. Lesson plan: How to teach your students about fake news. Fake news is making news, and it’s a problem. Not only did a BuzzFeed data analysis find that viral stories falsely claiming that the Pope endorsed Donald Trump and that Hillary Clinton sold weapons to terrorists receive more Facebook attention than the most popular news stories from established news outlets, but a false story about child trafficking in a Washington, D.C. pizza restaurant inspired a North Carolina man to drive 5 hours with a shotgun and other weapons to investigate.

How to Record a Webcam Video on Your Chromebook. Recording a video with the webcam on your Chromebook can be accomplished through the use of a free Chrome app called CaptureCast. CaptureCast, produced by Cattura Video, allows you to record the screen on your Chromebook as well as input from your webcam. To record a video with the webcam on your Chromebook open CaptureCast in your browser then allow it to access your webcam and microphone. Frases and Welcome to on Pinterest. Waarom Chromebooks. NetSpot Provides Free, Intelligent Wireless Network Analysis. GO! Pro - 3 mediawijze tools voor het onderwijs. Arduino STEM educational Robot kits Building Platform. (Unofficial) API Guide for mDrawBot mScara - All. ChickBot - the fully functional low-cost robot by Nick McCloud. Kickstarter. Free Sound Clips.

Data Wrangler. UPDATE: The Stanford/Berkeley Wrangler research project is complete, and the software is no longer actively supported. Instead, we have started a commercial venture, Trifacta. For the most recent version of the tool, see the free Trifacta Wrangler. Moral Machine. Doctopus Walkthrough. Doctopus + goobric making google apps for education more awesome. Drum Roll, Please! Announcing the Newly Released Doctopus, An Add-on for Google Docs.