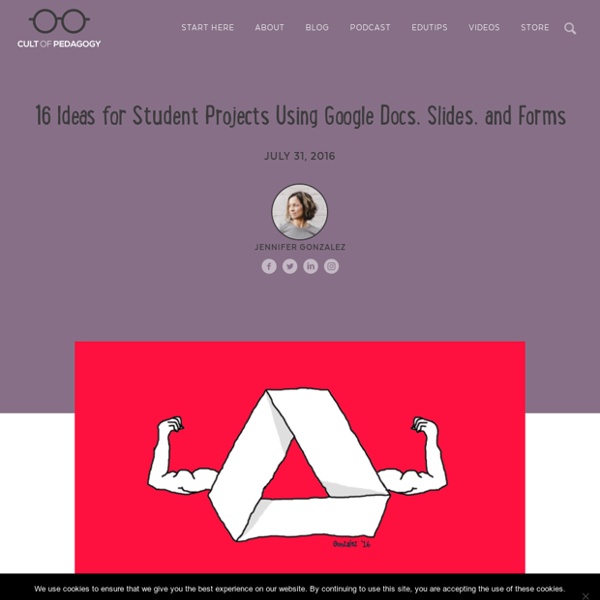 10 Ways to Use Google Drawings for Learning By Mike Kaufman What I love about the Google Apps for Educators suite is its versatility. There are so many ways to effectively use Google Docs or Slides that enhance student learning, and Google Drawings is no exception. What I love most about Google Drawings is that it allows students to work directly on an image. Apps That Rise to the Top: Tested and Approved By Teachers “In the following MindShift article, Katrina Schwartz provides a list of great apps for education, pressure tested by teachers themselves.” via MindShift With the thousands of educational apps vying for the attention of busy teachers, it can be hard to sift for the gold. Michelle Luhtala, a savvy librarian from New Canaan High School in Connecticut has crowd-sourced the best, most extensive list of appsvoted on by educators around the country. “I wanted to make sure we had some flexibility because there’s no one app that’s better than all the others,” Luhtala said. Some apps are best for younger students, others are more complicated, better suited for high school students.

How we used a digital zombie apocalypse to teach students about the Library Read how the University of Sussex Library used the open source Twine tool to develop a different approach to library induction MmIT Committee member @AntonyGroves describes using Twine to create a Zombie Apocalypse-themed online game to introduce students to the University of Sussex Library: So far this academic year has been one of playful learning. Colleagues in the Library have already run Open Access escape rooms for #OAWeek, used Lego in teaching, and organised a brilliant Stranger Things inspired quest as part of #LibrariesWeek. This post, however, will focus on an online game created for Welcome Week to introduce new students to the Library; one where players had to choose their own adventure and successfully navigate our services to survive a zombie apocalypse. The game was made using Twine, an open source tool introduced to us by the Technology Enhanced Learning team.

Grade 4 » Introduction In Grade 4, instructional time should focus on three critical areas: (1) developing understanding and fluency with multi-digit multiplication, and developing understanding of dividing to find quotients involving multi-digit dividends; (2) developing an understanding of fraction equivalence, addition and subtraction of fractions with like denominators, and multiplication of fractions by whole numbers; (3) understanding that geometric figures can be analyzed and classified based on their properties, such as having parallel sides, perpendicular sides, particular angle measures, and symmetry. Students generalize their understanding of place value to 1,000,000, understanding the relative sizes of numbers in each place. Operations and Algebraic Thinking Use the four operations with whole numbers to solve problems.Gain familiarity with factors and multiples.Generate and analyze patterns. Number and Operations in Base Ten Number and Operations—Fractions

Sign-up Now for Google Forms Locked Mode Back in June Google teased us with an announcement about a locked mode for Google Forms. All summer and fall I got questions about when it would be available. Today, Google announced that G Suite for Education users can now sign-up for early access to Google Forms locked mode. Sign-up here. Locked mode will allow you to restrict students to viewing only your Google Form while taking a quiz that you have given to them in Google Forms. Before you get too excited about locked mode there are a couple of things that you need to know.

Student Success Infographics Students love rich useful feedback. But, what exactly do they want and need from the instructor? Here are a few questions I have been asked by students, and ways to respond. Feedback Q & A Like this: The Best Games to Help You Learn Coding in 2019 We're told that coding is the saleable skill of the decade and also a pretty sweet pastime if you're into building your own apps or games. But traditional coding courses can be seriously dry (think the Sahara at midday in the dry season). Luckily, the industry is always looking for ways to bring people into the fold and has developed a range of games that keep the process engaging.

5 (More) Must-Use Google Chrome Extensions for Teachers A little while ago, I wrote about my 5 favorite Chrome extensions for teachers. Chrome extensions, as noted in the original post, are these neat little programs that extend the functionality of your Chrome browser — and you should definitely be using them if you aren’t already. Not surprisingly, while writing my original post, I had a bit of trouble narrowing down my favorites. There are so many helpful, time-saving and just plain fun Chrome extensions, and choosing just 5 proved to be a difficult task.

Five Apps Students Can Use To Make Podcasts - KQED "I can spend time helping students develop their stories rather than explaining the app," says Amanda Suttle, an English teacher who's using the Anchor app to help her juniors and seniors get their podcasts in shape at Licking Valley High School in Newark, Ohio. So, with several weeks still to go before the contest deadline, here are some of the apps and programs teachers told us they're using. (Of course, we're not endorsing these, we're just sharing what we've heard from many of you). Anchor Developed by Spotify, think of Anchor as a mobile recording studio: With a wi-fi connection, you can record with multiple people in different locations at the same time (as long as they have the app).