Cosmology of the Vedas. Temple of the Vedic Planetarium - Presentation 2012. Planck reveals an almost perfect Universe / Planck / Space Science. Cosmic microwave background seen by Planck Planck reveals an almost perfect Universe 21 March 2013 Acquired by ESA’s Planck space telescope, the most detailed map ever created of the cosmic microwave background – the relic radiation from the Big Bang – was released today revealing the existence of features that challenge the foundations of our current understanding of the Universe. 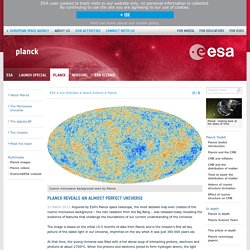 The image is based on the initial 15.5 months of data from Planck and is the mission’s first all-sky picture of the oldest light in our Universe, imprinted on the sky when it was just 380 000 years old. At that time, the young Universe was filled with a hot dense soup of interacting protons, electrons and photons at about 2700ºC. This ‘cosmic microwave background’ – CMB – shows tiny temperature fluctuations that correspond to regions of slightly different densities at very early times, representing the seeds of all future structure: the stars and galaxies of today. Planck’s anomalous sky Continue reading below. The Electric Universe—The Essential Role of Plasma. The Master Key System by Charles Haanel. Documentaire Scientifique Destination Cosmos 1 sur 3 Chasseurs de Planètes. Documentaire Scientifique Destination Cosmos 3 Sur 3 Les Secrets De L Univers. 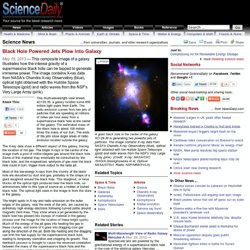 The image contains X-ray data from NASA's Chandra X-ray Observatory (blue), optical light obtained with the Hubble Space Telescope (gold) and radio waves from the NSF's Very Large Array (pink). This multi-wavelength view shows 4C+29.30, a galaxy located some 850 million light years from Earth. Black holes are 'portals to other universes,' according to new quantum results. According to Albert Einstein’s theory of general relativity, black holes are uninhabitable chasms of space-time that end in a “singularity,” or a mass of infinite density. 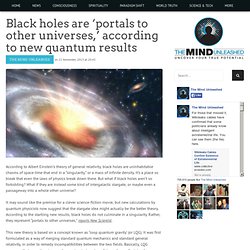 It’s a place so bleak that even the laws of physics break down there. But what if black holes aren’t so forbidding? What if they are instead some kind of intergalactic stargate, or maybe even a passageway into a whole other universe? The Largest Black Holes in the Universe. Trous noirs / documentaire science complet. Could Tiny 'Black Hole Atoms' Be Elusive Dark Matter? Dark matter, the invisible and mysterious stuff that makes up most of the material universe, might be hiding itself in microscopic black holes, says a team of Russian astrophysicists. 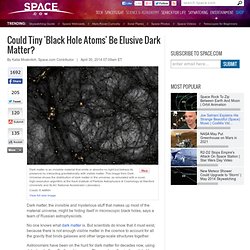 No one knows what dark matter is. But scientists do know that it must exist, because there is not enough visible matter in the cosmos to account for all the gravity that binds galaxies and other large-scale structures together. Astronomers have been on the hunt for dark matter for decades now, using detectors both on Earth and in space. The new hypothesis, formulated by astrophysicists Vyacheslav Dokuchaev and Yury Eroshenko at the Institute for Nuclear Research of the Russian Academy of Sciences in Moscow, suggests that dark matter could be made of microscopic — or quantum — "black hole atoms. " Les objets monstrueux de l'Univers HD 720p / documentaire complet en francais. Mystery radio bursts blamed on black hole 'blitzars' - space - 04 July 2013. Brief and bright, fast and furious, uncommonly pure. 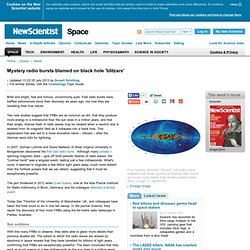 Fast radio bursts have baffled astronomers since their discovery six years ago, but now they are revealing their true nature. Two new studies suggest that FRBs are as common as dirt, that they produce more energy in a millisecond than the sun does in a million years, and that their single, intense flash of radio waves may be created when a neutron star is severed from its magnetic field as it collapses into a black hole. This explanation has also led to a more evocative name – blitzars – after the German word blitz for lightning. In 2007, Duncan Lorimer and David Narkevic of West Virginia University in Morgantown discovered the first fast radio burst . Although many pulsars – spinning magnetic stars – give off brief periodic flashes of radio waves, the "Lorimer burst" was a singular event, lasting just a few milliseconds. Sun outdone With this many FRBs to observe, they were able to glean more details than previous studies did. Farsnews. TEHRAN (FNA)- Astronomers were on a celestial fishing expedition for pulsing neutron stars and other radio bursts when they found something unexpected in archived sky sweeps conducted by the Parkes radio telescope in New South Wales, Australia. 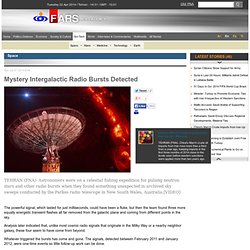 [VIDEO] The powerful signal, which lasted for just milliseconds, could have been a fluke, but then the team found three more equally energetic transient flashes all far removed from the galactic plane and coming from different points in the sky. Analysis later indicated that, unlike most cosmic radio signals that originate in the Milky Way or a nearby neighbor galaxy, these four seem to have come from beyond. Whatever triggered the bursts has come and gone. The signals, detected between February 2011 and January 2012, were one-time events so little follow-up work can be done.