Parenting: Use of Reinforcement and Punishment to influence behaviour on teenagers

Reinforcement and Punishment is two methods that was and are being used in daily life among people subconsciously. Parents use it on children, school teachers use it on their students and bosses use it on staffs. This two methods are used to train and condition one's behaviour.

4 Types of Consequences. 14 Best Examples Of Operant Conditioning. Operant conditioning, also known as instrumental conditioning, is a method of learning that employs punishments and rewards for behavior. 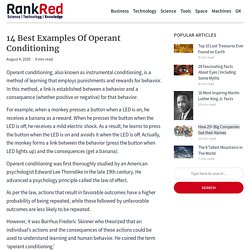 In this method, a link is established between a behavior and a consequence (whether positive or negative) for that behavior. For example, when a monkey presses a button when a LED is on, he receives a banana as a reward. When he presses the button when the LED is off, he receives a mild electric shock. As a result, he learns to press the button when the LED is on and avoids it when the LED is off. Actually, the monkey forms a link between the behavior (press the button when LED lights up) and the consequences (get a banana). Operant conditioning was first thoroughly studied by an American psychologist Edward Lee Thorndike in the late 19th century. As per the law, actions that result in favorable outcomes have a higher probability of being repeated, while those followed by unfavorable outcomes are less likely to be repeated. 14. 13. 12. 11. 10. 9. 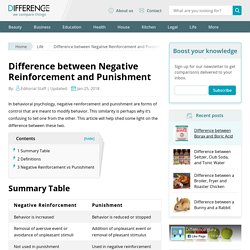 This similarity is perhaps why it’s confusing to tell one from the other. This article will help shed some light on the difference between these two. Summary Table Definitions Negative reinforcement occurs when a behavior is modified by the removal of an aversive event or the prevention of unpleasant stimuli from happening. The Difference between Positive/Negative Reinforcement and Positive/Negative Punishment. February 5, 2013 7:40 pm Published by Kelley Prince M.A., BCBA In Applied Behavior Analysis, there are two types of reinforcement and punishment: positive and negative. 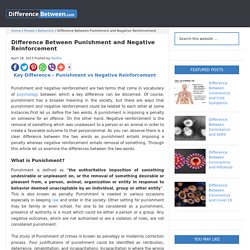 Of course, punishment has a broader meaning in the society, but there are ways that punishment and negative reinforcement could be related to each other at some instances.First let us define the two words. What is the misunderstanding? Parenting: Using Rewards and Punishments (Guide) Parenting can be a personal and a touchy subject. 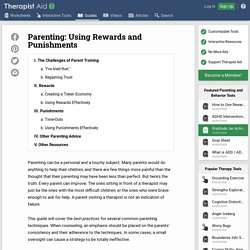 Many parents would do anything to help their children, and there are few things more painful than the thought that their parenting may have been less than perfect. But here's the truth: Every parent can improve. The ones sitting in front of a therapist may just be the ones with the most difficult children, or the ones who were brave enough to ask for help. A parent visiting a therapist is not an indication of failure. This guide will cover the best practices for several common parenting techniques. Most of the advice in this guide—unless noted otherwise—is effective for teenagers as well as younger children. The Challenges of Parent Training "I've tried that. " Before asking for help, most parents have tried it all. As a therapist, it's important to take special care listening to what a parent has tried, what has worked, and what hasn't worked.

Positive reinforcement is only one of many forms of discipline, but from the perspective of positive psychology, it may as well be the most important one as it focuses on amplifying what is already good in our children and in ourselves as their caretakers. Positive reinforcement as a form of positive discipline allows us to tap into our children’s individual strengths, draw attention to their personality traits and interests, and as a result give us an opportunity to connect, communicate effectively, and ultimately empower them to be more of themselves.

Before you read on, we thought you might like to download our 3 Positive Psychology Exercises for free. You can download the free PDF here. Parenting. 10 Controversial Ways Parents Have Punished Their Children. Tons of material has been created to instruct parents on how to punish their miscreant children. 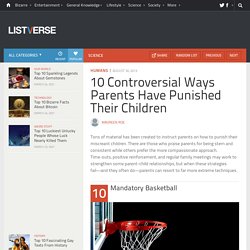 There are those who praise parents for being stern and consistent while others prefer the more compassionate approach. Time-outs, positive reinforcement, and regular family meetings may work to strengthen some parent-child relationships, but when these strategies fail—and they often do—parents can resort to far more extreme techniques. 10 Mandatory Basketball In poverty-stricken Huntingdon, Tennessee, parents are often unable or unwilling to take on an active role in raising their kids, so when behavior problems arise, these parents are at a loss for how to punish them. That’s where the Carroll Academy comes in—a day school operated by the county juvenile court and paid for by the state’s Department of Children’s Services.

In addition to pushing these kids to stay out of trouble with strict disciplinary policies, the school’s director, Randy Hatch, recruits them to the basketball team. Unwanted Effects of Reinforcement: The Bad Effects of a ... Disadvantages Of Operant Conditioning. Necessary cookies help make a website usable by enabling basic functions like page navigation and access to secure areas of the website. 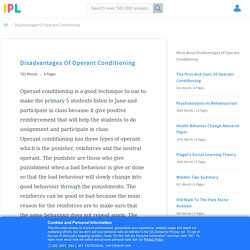