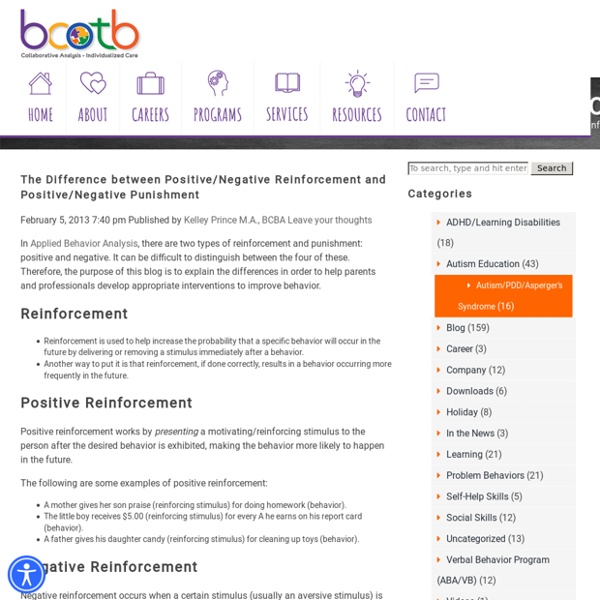 February 5, 2013 7:40 pm Published by Kelley Prince M.A., BCBA In Applied Behavior Analysis, there are two types of reinforcement and punishment: positive and negative. It can be difficult to distinguish between the four of these. Therefore, the purpose of this blog is to explain the differences in order to help parents and professionals develop appropriate interventions to improve behavior. Reinforcement Reinforcement is used to help increase the probability that a specific behavior will occur in the future by delivering or removing a stimulus immediately after a behavior.Another way to put it is that reinforcement, if done correctly, results in a behavior occurring more frequently in the future. Positive Reinforcement Positive reinforcement works by presenting a motivating/reinforcing stimulus to the person after the desired behavior is exhibited, making the behavior more likely to happen in the future. The following are some examples of positive reinforcement: Negative Reinforcement

Negative Reinforcement: What Is It and How Does It Work? What is negative reinforcement? Negative reinforcement is a method that can be used to help teach specific behaviors. With negative reinforcement, something uncomfortable or otherwise unpleasant is taken away in response to a stimulus. Over time, the target behavior should increase with the expectation that the unpleasant thing will be taken away. Read on to learn more about this type of learning. BYU Study: a need for positive reinforcement among teens There are countless publications describing the best ways to raise a child in the hopes of them becoming successful adults. Between the books, magazines and video tutorials, parents may be finding themselves overwhelmed on more than one occasion. But a group of researchers at Brigham Young University have found the answer to helping children through life may be less complicated than it seems. The BYU study found bad behavior can be discouraged among children by simply encouraging good behavior. The study, Flourishing During the Teen Years: Why “Not Being Bad” Isn’t Good Enough, used information from a 10-year project that followed 500 families in order to see where the individuals struggled and what actions helped them become successful.

Parenting A Teen Through Positive Reinforcement - Back On Track Most parents can agree: the teenage years can be rough! Hormones are raging, they are trying to gain more independence, and they spend a lot of time away from their parents and their home while hanging with friends. One minute they love and adore you, the next minute you ruined their life. Can many of you relate? When tempers flare and disagreements are happening, it’s hard to not resort to yelling and harsh discipline, but studies are showing us that positive reinforcement may be the key to success, not just in the home but also in their school life.

Teen brains may have an advantage — better learning Teens can get a bad rap for their behavior. They tend to be more sensitive to rewards than to punishments. Indeed, teens tend to seek out rewards more than do adults or young kids. Those reward-seeking behaviors can cause nightmares for the adults in their lives. But a teen’s big interest in rewards might have an upside, a new study finds. 5 Activities For Using Positive Reinforcement in the Classroom It wasn’t too long ago that school-rooms were places of stern words and plentiful discipline. It was commonplace for teachers to favor harsh punishment over positive punishment, including using the cane. Now, however, it is recognized that there are more effective ways to teach and to manage classrooms. Techniques such as positive reinforcement. Positive reinforcement was introduced by B.F.

Positive Reinforcement and Operant Conditioning In operant conditioning, positive reinforcement involves the addition of a reinforcing stimulus following a behavior that makes it more likely that the behavior will occur again in the future. When a favorable outcome, event, or reward occurs after an action, that particular response or behavior will be strengthened. One of the easiest ways to remember positive reinforcement is to think of it as something being added. By thinking of it in these terms, you may find it easier to identify real-world examples of positive reinforcement. Sometimes positive reinforcement occurs quite naturally. The value of reinforcing positive behaviour for our teens As children approach adolescence, they sometimes begin testing limits, bending the rules and otherwise going against the grain. While this is normal behaviour for teens, it can be incredibly trying for you, as a parent. Teenagers may also be dealing with the stresses that come with trying to fit in with their peers and assert their growing independence.

Why Negative Reinforcement Works Better as Your Child Grows into A Teen If you are someone who has always loved the freedom of “no strings attached”, the idea of marrying and having kids could be quite underwhelming. The idea of having a family always used to bug me, until I finally found the love of my life. It's when I categorically made up my mind about what I wanted from our marriage. I wanted kids, I was clear about that, but I wasn’t certain how I would be taking care of them. The Outgrow of Parenting Fears and My Redemption A year after my marriage, I got pregnant with a baby boy. The hormonal changes were intense during the pregnancy, and again, I started overthinking about how I would be raising him.

A first-hand account of the effects of peaceful parenting from a teen. I often get questions from parents unconvinced of the effectiveness of my parenting techniques. Fueled by a steady diet of conventional parenting rules concerning time-outs, control, punishment, and praise, as well as personal reflections on their own childhoods, they ask questions like: “Does this stuff really work?” “How do kids learn about consequences if they aren't punished?” “Have you ever had to deal with a child having a meltdown in the middle of the grocery store?” Reinforcement and Punishment: Examples & Overview The power of reinforcement and punishment to change behavior was discovered by B.F. Skinner. Read on to learn about Skinner's discoveries and how you may experience reinforcement and punishment in your own life. B.F.

Parenting Children with Positive Reinforcement (Examples + Charts) Children don’t come with instructions and discipline is often experienced by parents and children alike as an arena where our will and wits are tested. Positive reinforcement is only one of many forms of discipline, but from the perspective of positive psychology, it may as well be the most important one as it focuses on amplifying what is already good in our children and in ourselves as their caretakers. Positive reinforcement as a form of positive discipline allows us to tap into our children’s individual strengths, draw attention to their personality traits and interests, and as a result give us an opportunity to connect, communicate effectively, and ultimately empower them to be more of themselves. Before you read on, we thought you might like to download our 3 Positive Psychology Exercises for free. You can download the free PDF here. A Look at Parenting with Positive Reinforcement