Clarkesworld Magazine - Science Fiction and Fantasy : A Militant Peace by David Klecha and Tobi. I am not only a pacifist but a militant pacifist. 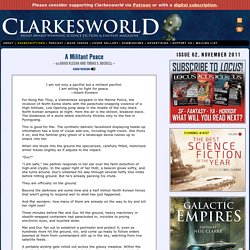 I am willing to fight for peace. —Albert Einstein For Nong Mai Thuy, a Vietnamese sergeant in the Marine Police, the invasion of North Korea starts with the parachute-snapping violence of a High Altitude, Low Opening jump deep in the middle of the inky black North Korean airspace at night. Here the air is the stillest, bleakest black. The bleakness of a world where electricity trickles only to the few in Pyongyang. This is good for Mai. Short story: ILU-486. Summary: In the not-so-distant future of Virginia, the Personhood Act has outlawed abortion and chemical birth control. 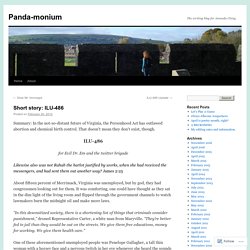 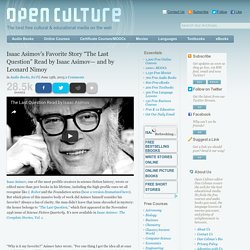 But which piece of this massive body of work did Asimov himself consider his favorite? Always a fan of clarity, the man didn’t leave that issue shrouded in mystery: the honor belongs to “The Last Question,” which first appeared in the November 1956 issue of Science Fiction Quarterly. It’s now available in Isaac Asimov: The Complete Stories, Vol. 1. “Why is it my favorite?” 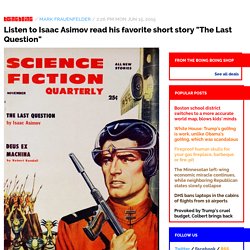 It appeared in the November 1956 issue of Science Fiction Quarterly and Asimov said it was "by far my favorite story of all those I have written. " It's fun hearing Asimov read it in his energetic Brooklyn accent. But if you listen to Leonard Nimoy's magnificent reading (below), you'll understand why it is usually much better to have a trained actor read a story, instead of the author. [via] report this ad Will malfunction or incompetence start World War Three? Eric Schlosser’s book and film Command and Control look at the terrifying prospects of nuclear friendly fire, where one of America’s nukes detonates on US soil. 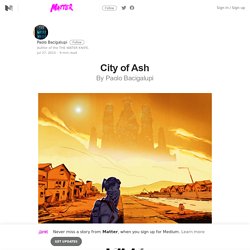 She woke in the morning, and for the first time in more than a year, she felt refreshed. It didn’t matter that she was covered in sweat from sleeping in the hot, close basement of the abandoned house, or that that the ashy scent of wildfire smoke had invaded their makeshift bedroom, or that her cough was back. None of it bothered her the way it had before, because she finally felt hopeful.

She got up, climbed the basement stairs, and stepped out into the oven heat of Phoenix morning, squinting and wrinkling her nose at the ashy irritants in the air. Free Short Stories - Hourglass Tales, by Sunny Jackson - SF Stories from Fictional Worlds. Bitter Grounds. We hope you enjoy this reprint, which first appeared in the Mojo: Conjure Stories anthology and subsequently in the collection Fragile Things. 1. 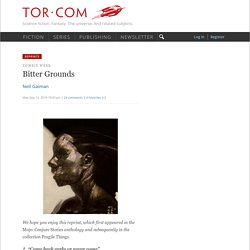 “Come back early or never come” In every way that counted, I was dead. The Smog Society. eZines. Given the Advantage of the Blade. Life-pod. And We Were Left Darkling. Python. Uncanny Magazine Year Two. Last year, three-time Hugo Award winner Lynne M. 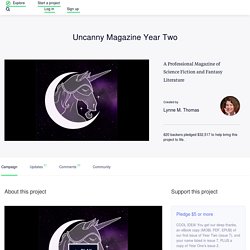 The Invention of Separate People. EP506: Harvester Dreams. Filed in 13 and Up, Podcasts on October 13, 2015 with no comments by Michael J. 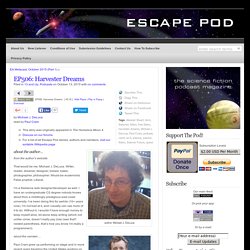 DeLucaread by Paul Cram This story was originally appeared in The Homeless Moon 4.Discuss on our forums. For a list of all Escape Pod stories, authors and narrators, visit our sortable Wikipedia page author Michael J. Time Shards. Tragic Business. EP507: The Call of the Sky. Filed in 10 and Up, Podcasts on October 22, 2015 with 2 comments by Cliff Winnigread by Marguerite Kenner This story was originally published in the anthology When the Hero Comes Home: 2.Discuss on our forums. 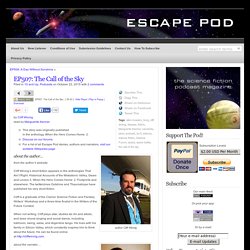 For a list of all Escape Pod stories, authors and narrators, visit our sortable Wikipedia page. Water Rights. EP509: Broken. The Pipes of Pan. When We Were Giants. Tea Time. Beacon 23: Little Noises. EP513: Adaptation and Predation. On the day Auston Habershaw was born, Skylab fell from the heavens. 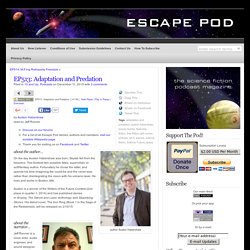 This foretold two possible fates: supervillain or scifi/fantasy author. Fortunately he chose the latter, and spends his time imagining the could-be and the never-was rather than disintegrating the moon with his volcano laser. He lives and works in Boston, MA. Auston is a winner of the Writers of the Future Contest (2nd place in quarter 1, 2014) and has published stories in Analog, The Sword and Laser Anthology, and Stupefying Stories.

“Except at this point we’re pretty sure it just looks like a person.” The small, white-whiskered old man sitting in the velvet armchair across from her nodded thoughtfully. Black Baccara by Jay Lake and Ruth Nestvold. Baccara is one of the dark ones from among the ranks of the Rose Knights. She is a pale woman, needle-thin with large eyes dark as bruises. She always goes clad in satin of a color that falls somewhere between maroon and leaf mold. Baccara follows battle rather than leading it like most of her fellows, always in the service of the Armies of the Moon. Baccara can hear the whispers of the departing souls of the dead. From them she bargains for secrets. She chanced upon a forest ambush one early winter's day.

Galactic Weather Report by Julia Nolan. This Monday, the speed of light is expected to decrease by ninety percent. We've issued a travel warning and recommend that interstellar travel only commence if there are no other options. If necessary, please proceed through specially designated wormholes. Fortunately, gravity will decrease by a balmy ten percent, so it's looking to be a great week on your home planet. On Tuesday, travel warnings remain in effect, but the electron and proton charges are expected to increase three percent. Believe Me by Jennifer Della'Zanna.

Just one more hill and I would be home. As I topped the rise, the county sheriff's car filled my vision, parked in my driveway. My 14-year-old was babysitting his sister for the first time. What happened? I pulled onto the grass, jumped out of the car, and sprinted toward the house. The door opened as I approached. Let There Be Light by Chen Qiufan (translated by Ken Liu) Let there be light, Mimi thought. The Curse of Giants by Jose Pablo Iriarte. Harlekin by Jay Lake and Ruth Nestvold. Harlekin was fair as a maiden, with a blush to match.

Women can possess the kind of beauty that was his and still be taken seriously, but not men--or so it seemed to the beautiful youth. Chatter Monkey by Caroline Couderc. A Cure Over Coffee by Pontius Paiva. The church across the street looks busy for a Thursday. The Old Blue Notebook by Victor Fernando R. Ocampo. "Incarnadine" by J.C. Runolfson.... - Daily Science Fiction. You're Doing the Best You Can by Heather Morris. So you put on your headphones, and listen. In the universe where Cold War Kids is your favorite band it turns out that you never fled the city. "Meat and Fire" by Matthew F. Amati.... - Daily Science Fiction. "Android One" by Richard Ankers.... - Daily Science Fiction. Beneath Ceaseless Skies - Call and Answer, Plant and Harvest by Cat Rambo. Cathay is a Chaos Mage and doesn’t care who knows it. Fear and envy are fine emotions to set someone spinning into a roil, and Cathay can sip from that cup as easily as any other, wandering through a crowd and watching people edge away.

She dresses sometimes in blue and other times in green or silver or any other color except black. Today her sleeves are sewn with opals and moonstones and within their glimmer here and there on the left sleeve, glitters another precious stone, set in no particular order, random as the stars. Her skirt and bodice are aluminum fish-scales, armored though she expects no fight. Her only weapon is her own considerable wit. Lightspeed Magazine. A Dance to End Our Final Day by Beth Cato - Evil Girlfriend Media Evil Girlfriend Media. The world would end at 6:09 p.m., but Meg’s final batch of chocolate chip cookies would be done in three minutes.