Video: Efficiency Gain for Emerging Photovoltaic Material. Fresh on the heels of a new efficiency record reported for perovskite-silicon tandem solar cells, a similar achievement has been posted for sulfide kesterite. 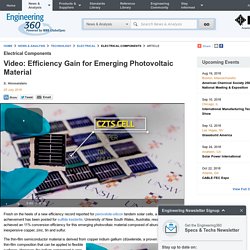 University of New South Wales, Australia, researchers achieved an 11% conversion efficiency for this emerging photovoltaic material composed of abundant and inexpensive copper, zinc, tin and sulfur. The thin-film semiconductor material is derived from copper indium gallium (di)selenide, a proven high- An 11 percent conversion efficiency was documented for sulfide kesterite (Cu2ZnSnS4, also referred to as CZTS). Source: University of New South Walesefficiency, thin-film composition that can be applied to flexible surfaces. However, the indium component is rare and relatively expensive, due to high demand for its use in flat panel displays. Sulfide kesterite also has the advantage of being easily integrated into existing manufacturing processes. No, Tesla's Solar Roof Will Not Cost the Same as a Traditional Roof. It's not that crazy hard. -- Elon Musk That's exactly what Elon Musk said when discussing the manufacturing of solar roofs during Thursday's investor vote on Tesla Motors' (NASDAQ:TSLA) acquisition of SolarCity Corp (NASDAQ:SCTY). 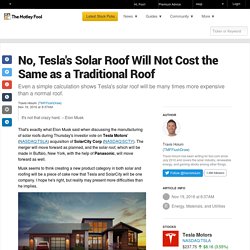 The merger will move forward as planned, and the solar roof, which will be made in Buffalo, New York, with the help of Panasonic, will move forward as well. Musk seems to think creating a new product category in both solar and roofing will be a piece of cake now that Tesla and SolarCity will be one company. I hope he's right, but reality may present more difficulties than he implies. Image source: Tesla. Solar roofs are the biggest test Tesla has faced When Tesla Motors began making vehicles, it changed the auto industry as we know it, but it used a lot of existing technology along the way. 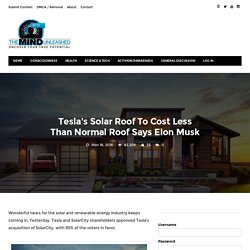 Yesterday, Tesla and SolarCity shareholders approved Tesla’s acquisition of SolarCity, with 85% of the voters in favor. Depiction of a solar roofed home. However, the big news of the day came when Elon Musk said that the cost to install their solar roofs will likely be less than a normal roof, even before adding in the electricity savings that will be gained from the homeowner: World record solar cell with 44.7% efficiency. The Fraunhofer Institute for Solar Energy Systems ISE, Soitec, CEA-Leti and the Helmholtz Center Berlin jointly announced today having achieved a new world record for the conversion of sunlight into electricity using a new solar cell structure with four solar subcells. 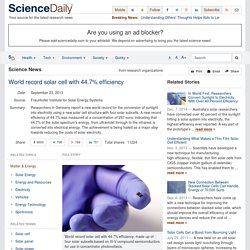 Surpassing competition after only over three years of research, and entering the roadmap at world class level, a new record efficiency of 44.7% was measured at a concentration of 297 suns. This indicates that 44.7% of the solar spectrum's energy, from ultraviolet through to the infrared, is converted into electrical energy. This is a major step towards reducing further the costs of solar electricity and continues to pave the way to the 50% efficiency roadmap. Back in May 2013, the German-French team of Fraunhofer ISE, Soitec, CEA-Leti and the Helmholtz Center Berlin had already announced a solar cell with 43.6% efficiency.

Paper-thin printed solar cells could provide power for 1.3 billion people. The cost of solar power has declined dramatically over the past few decades, from $40 per watt in 1977 to $0.74 per watt in 2013. 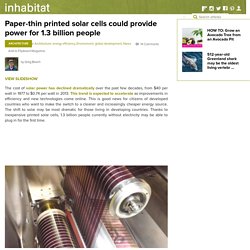 This trend is expected to accelerate as improvements in efficiency and new technologies come online. This is good news for citizens of developed countries who want to make the switch to a cleaner and increasingly cheaper energy source. The shift to solar may be most dramatic for those living in developing countries. Thanks to inexpensive printed solar cells, 1.3 billion people currently without electricity may be able to plug in for the first time. Paper-thin solar cells require only an industrial printer to manufacture and are inexpensive to produce. How You Can Go Solar Without Even Owning A Single Panel. By Loraine Chow We know that solar power in the U.S. is growing at leaps and bounds and is only getting cheaper. 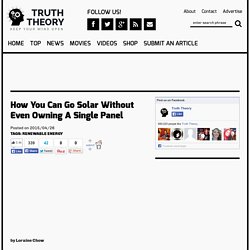 Still, there are limitations. Not everyone has the ability to harness the sun’s power, especially if you’re not a property owner, don’t have the proper rooftop or can’t afford the costly solar panel installation process. Researchers Identify New Method for Manufacturing Perovskite Solar Cells. By Alexander Chilton Image Credit: Padture lab | Brown University A research team at Brown University have developed a new technique to produce light-absorbing perovskite films for use in flexible, thin and high efficiency solar cells. 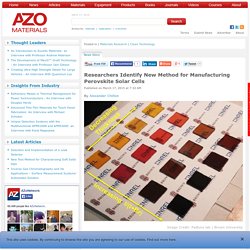 This new method involves using a solvent bath at room-temperature in order to generate perovskite crystals instead of using a blast of heat as in other conventional crystallization techniques. The method produces high-quality crystalline films with the accurate control of thickness over large areas. It also paves the way for the mass production of perovskite cells. This 3-D Printed Tree Can Create Electricity From Sunshine, Vibrations and Temperature Differentials! Developers at VTT Technical Research Centre of Finland have recently created a 3D printed tree that actually harvests solar energy. 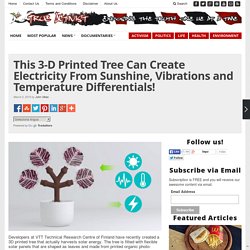 The tree is fitted with flexible solar panels that are shaped as leaves and made from printed organic photo-voltaic cells. The cells are roughly 0.2 mm thick, and when about 200 leaves are assembled together, they can generate 3.2 amperes of electricity and 10.4 watts of power. New ‘Solar Cloth’ Material Creates Solar Energy Pretty Much Anywhere! England-based Solar Cloth Company has created a lightweight photovoltaic fabric solar panel system that can operate pretty much anywhere. 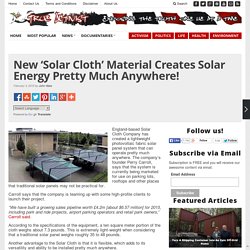 The company’s founder Perry Carroll, says that the system is currently being marketed for use on parking lots, rooftops and other places that traditional solar panels may not be practical for. Carroll says that the company is teaming up with some high-profile clients to launch their project. “We have built a growing sales pipeline worth £4.2m [about $6.57 million] for 2015, including park and ride projects, airport parking operators and retail park owners,” Carroll said.

According to the specifications of the equipment, a ten square meter portion of the cloth weighs about 7.3 pounds. New technique offers spray-on solar power - U of T Engineering News. Pretty soon, powering your tablet could be as simple as wrapping it in cling wrap. 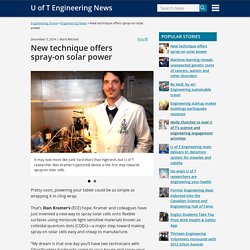 That’s Illan Kramer’s (ECE) hope. Kramer and colleagues have just invented a new way to spray solar cells onto flexible surfaces using miniscule light-sensitive materials known as colloidal quantum dots (CQDs)—a major step toward making spray-on solar cells easy and cheap to manufacture. “My dream is that one day you’ll have two technicians with Ghostbusters backpacks come to your house and spray your roof,” says Kramer, a post-doctoral fellow with the Ted Sargent group in The Edward S.

Rogers Sr. Department of Electrical & Computer Engineering at the University of Toronto, and IBM Canada’s Research and Development Centre. Biohybrid solar cells—Spinach power gets a big boost. This is a biohybrid solar cell that uses the photosynthetic protein from spinach made by Vanderbilt students based on a previous design. Credit: Amrutur Anilkumar, Vanderbilt University An interdisciplinary team of researchers at Vanderbilt University have developed a way to combine the photosynthetic protein that converts light into electrochemical energy in spinach with silicon, the material used in solar cells, in a fashion that produces substantially more electrical current than has been reported by previous "biohybrid" solar cells.

The research was reported online on Sep. 4 in the journal Advanced Materials and Vanderbilt has applied for a patent on the combination. "This combination produces current levels almost 1,000 times higher than we were able to achieve by depositing the protein on various types of metals. Environmentally Friendly Solar Cell Pushes Forward the ‘Next Big Thing In Photovoltaics’ Phys | May 4th 2014 Northwestern University researchers are the first to develop a new solar cell with good efficiency that uses tin instead of lead perovskite as the harvester of light. The low-cost, environmentally friendly solar cell can be made easily using “bench” chemistry—no fancy equipment or hazardous materials. “This is a breakthrough in taking the lead out of a very promising type of solar cell, called a perovskite,” said Mercouri G. Kanatzidis, an inorganic chemist with expertise in dealing with tin.

A New Solar / Wind Charge Controller Based on the 555 Chip. UPDATE This 555 based solar charge controller project has won first place in the Utility Category of the 555 Design Contest!!!!! Scroll to the bottom of the page for more information on the contest. Several years ago I began building my own wind turbines and solar panels to provide power on my remote, off-grid property. A charge controller is an essential part of any wind or solar system to ensure the batteries aren't over or under charged. The charge controller monitors the battery voltage and switches the batteries off charge when they are fully charged, and switches them back on charge when they reach a pre-set level of discharge. This is a new and improved charge controller design based on the 555 chip. Newly Invented Off-Grid Solar Grill Can Store Energy and Cook at Night Without Electricity. It will store the heat energy for up to 25 hours released as a convective heat at temperatures of 450 degrees F.

Barbecuing is one of the greatest pastimes for many, but it certainly isn’t one of our most environmentally friendly. Whether you prefer charcoal, wood chips or propane, grilling releases emissions and contributes to poor air quality. Up until now, solar powered grilling has required, as you might expect, the sun, which means traditional fuel-fired grills are required after sunset. EWICON bladeless wind turbine generates electricity using charged water droplets. Dutch researchers have developed the EWICON, a bladeless windmill with no moving parts that produces electricity by pushing charged water droplets into the wind Image Gallery (2 images) Wind energy may be one of the more sustainable sources of power available, but the spinning blades of conventional wind turbines require regular maintenance and have attracted criticism from bird lovers. That might explain why we've seen wind turbine prototypes that enclose the blades in a chamber or replace them entirely with a disc-like system.

But researchers in the Netherlands set out to eliminate the need for a mechanical component entirely and created the EWICON, a bladeless wind turbine with no moving parts that produces electricity using charged water droplets. How it Works. Watch this: Watch 3 actual turbines in action! Saphon Energy. New paradigm for solar cell construction demonstrated. One Day, Thorium Could Power Everything. If your car was powered by thorium, you would never need to refuel it. The vehicle would burn out long before the chemical did. The thorium would last so long, in fact, it would probably outlive you. A New Solar Material Shows Its Potential. Myth-busting Germany’s energy transition. Major English-language media have been propagating a false narrative about the stunning success of Germany's transition to renewable energy: the Energiewende. To hear them tell it, the transition has been a massive failure, driving up power prices, putting Germany's grid at risk of blackouts, and inspiring a mass revolt against renewables.

Startup Shows Off Its Cheaper Grid Battery. New battery design could give electric vehicles a jolt. A radically new approach to the design of batteries, developed by researchers at MIT, could provide a lightweight and inexpensive alternative to existing batteries for electric vehicles and the power grid. A Simple Way to Cut Coal Plant Carbon Emissions. The same chemical reactions that allow water to carve out caves in limestone could be used to capture carbon dioxide from smokestacks, say researchers at Stanford and the University of California at Santa Cruz.

The process—which uses seawater and crushed limestone to capture carbon dioxide—would be simpler than conventional carbon capture and storage (CCS) technologies, and potentially cheaper and more practical. The researchers have demonstrated the idea in laboratory tests, but not yet at an actual power plant. Conventional CCS is a complex process that involves first isolating carbon dioxide from other exhaust gases, then compressing it and shipping it to an underground storage site.