Six-Legged Giant Finds Secret Hideaway, Hides For 80 Years : Krulwich Wonders... Posts. All People on 1 Page. Neanderthal. A Time-Lapse Map of Every Nuclear Explosion Since 1945 - by Isao Hashimoto. The Scale of the Universe 2. All the Water on Earth. The Size Of Our World. OMG Facts. When you repeat a word continuously and it loses meaning, it’s called “jamais vu.” 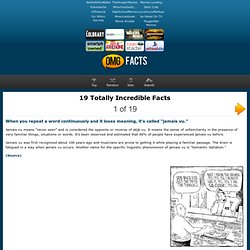 Jamais vu means “never seen” and is considered the opposite or reverse of déjà vu. It means the sense of unfamiliarity in the presence of very familiar things, situations or words. Tallest Mountain to Deepest Ocean Trench. Science news and science jobs from New Scientist. A 3D Journey Through the Observable Universe. Suddenly There's A Meadow In The Ocean With 'Flowers' Everywhere : Krulwich Wonders... It was three, maybe four o'clock in the morning when he first saw them. 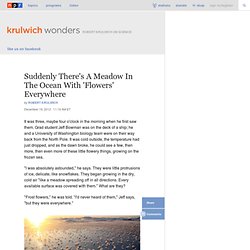 Grad student Jeff Bowman was on the deck of a ship; he and a University of Washington biology team were on their way back from the North Pole. It was cold outside, the temperature had just dropped, and as the dawn broke, he could see a few, then more, then even more of these little flowery things, growing on the frozen sea. "I was absolutely astounded," he says. They were little protrusions of ice, delicate, like snowflakes. They began growing in the dry, cold air "like a meadow spreading off in all directions. Severe nuclear reactor accidents likely every 10 to 20 years, European study suggests. 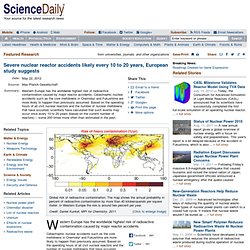 Catastrophic nuclear accidents such as the core meltdowns in Chernobyl and Fukushima are more likely to happen than previously assumed. Based on the operating hours of all civil nuclear reactors and the number of nuclear meltdowns that have occurred, scientists at the Max Planck Institute for Chemistry in Mainz have calculated that such events may occur once every 10 to 20 years (based on the current number of reactors) -- some 200 times more often than estimated in the past. The researchers also determined that, in the event of such a major accident, half of the radioactive caesium-137 would be spread over an area of more than 1,000 kilometres away from the nuclear reactor.

Their results show that Western Europe is likely to be contaminated about once in 50 years by more than 40 kilobecquerel of caesium-137 per square meter. Welcome to the USGS - U.S. Geological Survey. Andromeda if it were brighter. Endless Fukushima catastrophe: 2020 Olympics under contamination threat — RT Op-Edge. Dr Helen Caldicott is one of the most articulate and passionate advocates of citizen action to remedy the nuclear and environmental crises. 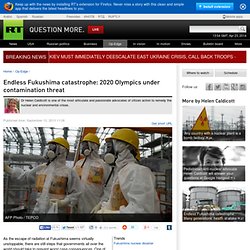 Published time: September 15, 2013 11:06 AFP Photo / TEPCO As the escape of radiation at Fukushima seems virtually unstoppable, there are still steps that governments all over the world should take to prevent worst case consequences. As the climate changes, extreme weather isn't that extreme any more. Britain and northern Europe are dripping their way into what is already being called a "lost summer". 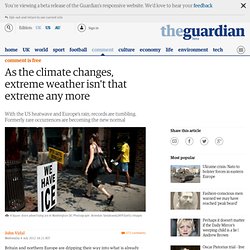 We have had our wettest April and June and our coldest spring, and there is no end in sight of the abnormal weather. But we can take some comfort in the fact that we are not alone. In the US, 100 million people in 17 states have now had to be warned about the dangers of one of most intense heatwaves of the last century. Life in many US cities has become unbearable, with temperatures well over 100F (38C) lasting for many days now. More than 40,000 temperature records have already been set in the US this year and freak storms, record rainfall and giant forest fires have left millions suffering.

Spectacularly Preserved Fossil Suggests Most Dinosaurs Were Feathered. When Continental Drift Was Considered Pseudoscience. Rotation Of Earth Plunges Entire North American Continent Into Darkness. NEW YORK—Millions of eyewitnesses watched in stunned horror Tuesday as light emptied from the sky, plunging the U.S. and neighboring countries into darkness. As the hours progressed, conditions only worsened. Enlarge Image Satellite view at 4:50 p.m. EST shows the sun disappearing from the sky. At approximately 4:20 p.m.

Neil Armstrong: The Man and the Moon. F. 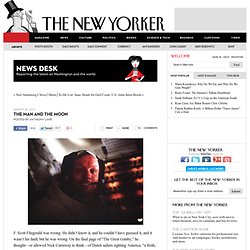 Scott Fitzgerald was wrong. He didn’t know it, and he couldn’t have guessed it, and it wasn’t his fault; but he was wrong. On the final page of “The Great Gatsby,” he thought—or allowed Nick Carraway to think—of Dutch sailors sighting America, “a fresh, green breast of a new world.” To set foot upon that greenness was not an invasion, but a gasp: “For a transitory enchanted moment man must have held his breath in the presence of this continent, compelled into an aesthetic contemplation he neither understood nor desired, face to face for the last time in history with something commensurate with his capacity for wonder.”

When those words were published, in 1926, it was unfathomable that they might demand revision; but because of what happened forty-three years later, and because of one American who died on Saturday, we need quietly to amend Fitzgerald’s text, and add a single word. Edstradling : This pic is slightly unner... 2012 July 17 - Simulation: A Disk Galaxy Forms. Science News, Articles and Information. The Internet map. The map of the Internet Like any other map, The Internet map is a scheme displaying objects’ relative position; but unlike real maps (e.g. the map of the Earth) or virtual maps (e.g. the map of Mordor), the objects shown on it are not aligned on a surface. 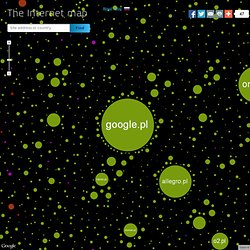 Mathematically speaking, The Internet map is a bi-dimensional presentation of links between websites on the Internet. Every site is a circle on the map, and its size is determined by website traffic, the larger the amount of traffic, the bigger the circle. Users’ switching between websites forms links, and the stronger the link, the closer the websites tend to arrange themselves to each other.

594 - Mind over Map: the World Is What You Make It. This is a map that takes some time to get your head around; quite literally, because to appreciate it fully, you need to consider it both with its north side and its south side up [1]. To spare you the risk of neck injury, we're providing both versions below: first with north on top, then south.

And what do you know? There is no right side up -- or rather: there is no side up. Science Daily: News & Articles in Science, Health, Environment & Technology. Earth. News & Comment. Curiosity finds organics on Mars, but possibly not of Mars. High performance access to file storage NASA says that no, it hasn't found definite proof that Mars has its own organic compounds, but that it has found some very interesting indications that need to be checked. 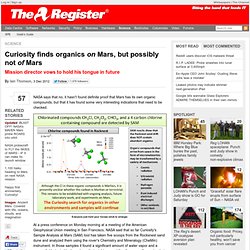 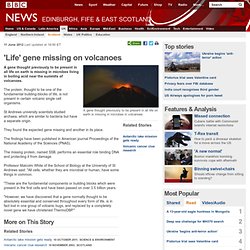 The protein, thought to be one of the fundamental building-blocks of life, is not present in certain volcanic single cell organisms. St Andrews university scientists studied archaea, which are similar to bacteria but have a separate origin. Great Discoveries Channel: Sci, Space, Tech.