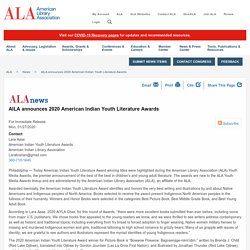 The awards are new to the ALA Youth Media Awards lineup and are administered by the American Indian Library Association (AILA), an affiliate of the ALA. Building Perspectives. “They didn’t see a child. 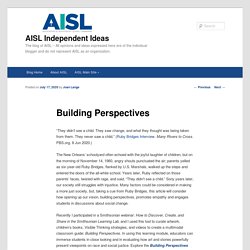 They saw change, and what they thought was being taken from them. They never saw a child.” (Ruby Bridges Interview. Many Rivers to Cross. PBS.org. 8 Jun 2020.) The New Orleans’ schoolyard often echoed with the joyful laughter of children, but on the morning of November 14, 1960, angry shouts punctuated the air; parents yelled as six-year-old Ruby Bridges, flanked by U.S. Recently I participated in a Smithsonian webinar: How to Discover, Create, and Share in the Smithsonian Learning Lab, and I used this tool to curate artwork, children’s books, Visible Thinking strategies, and videos to create a multimodal classroom guide: Building Perspectives.

Following is a brief overview of Building Perspectives: Building Perspectives encourages students to evaluate ways that artists and authors help us to “see the person,” expanding our viewpoints by developing empathy and understanding. Ruby BridgesRosa ParksJohn Lewis. BIPOC and #OwnVoices Books - Google Sheets.

An Open Letter to Scales on Censorship and School Library Journal. 20 Must-Read LGBTQIA+ Children’s Books – The Conscious Kid. This week, GLAAD released the findings from its fourth annual Accelerating Acceptance report, a national survey that measures American attitudes toward LGBTQ people and issues. 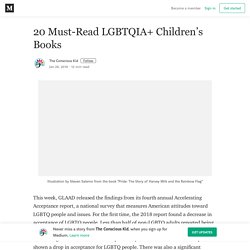 For the first time, the 2018 report found a decrease in acceptance of LGBTQ people. Less than half of non-LGBTQ adults reported being “very” or “somewhat” comfortable with LGBTQ people across seven situations. This is a significant decline from the previous year and the first time the report has shown a drop in acceptance for LGBTQ people. There was also a significant increase in the number of LGBTQ people who experienced discrimination based on sexual orientation or gender identity. “In a single year, we’ve seen significant declines from what had been an increasingly accepting America to one now less supportive. To promote awareness of children’s books that uplift LGBTQIA+ voices, history, and culture, The Conscious Kid has put together a list of 21 recommended reads. Large Fears by Myles E. Simon vs. Black Books Matter: Children's Books Celebrating Black Boys — the conscious kid. 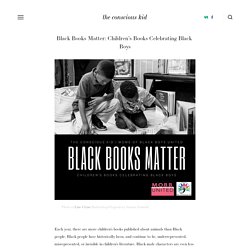 I, too, sing America.I am the darker brother.They send me to eat in the kitchenWhen company comes,But I laugh,And eat well,And grow strong. Langston Hughes was a courageous voice of his time, and his authentic call for equality still rings true today. Beautiful paintings from illustrator Bryan Collier accompany and reinvent the celebrated lines of the poem “I, Too,” creating a breathtaking reminder to all Americans that we are united despite our differences. Ages 4–8. The Whiteness of My Profession. Over at Heavy Medal: A Mock Newbery Blog – a commenter noticed that the nineteen Heavy Medal readers who volunteered to read and participate in discussing and choosing our 2019 Heavy Medal Award winners/honorees all identify as White. 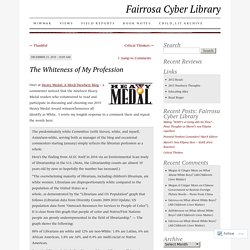 I wrote my longish response in a comment there and repeat the words here: The predominately white Committee (with Steven, white, and myself, Asian/non-white, serving both as manager of the blog and occasional commenters starting January) simply reflects the librarian profession as a whole.Here’s the finding from ALSC itself in 2016 via an Environmental Scan study of librarianship in the U.S. 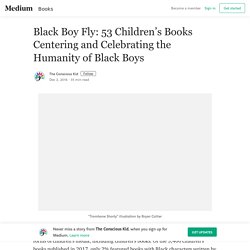 Of the 3,400 children’s books published in 2017, only 2% featured books with Black characters written by Black authors. Even fewer featured Black boys or men. This list of children’s books with Black males as heroes and protagonists was created by The Conscious Kid, in partnership with LINE4LINE. The Conscious Kid is a critical literacy organization that promotes access to children’s books by and about underrepresented groups. LINE4LINE is a Baton Rouge-based barbershop program that strengthens literacy skills and attitudes around reading for young men of color by providing free haircuts to boys in exchange for reading books.

Crown: An Ode to the Fresh Cut by Derrick Barnes, illustrated by Gordon C. Twelve Books for Feminist Boys and Girls. Culturally Diverse Children's and YA Book Lists. Making “WAVE”s or Going with the Flow? – Pinay Thoughts on Marvel’s new Filipina superhero.