Best 24 LGBTQ books of 2019, according to Lambda Literary. LGBT Literature in the Classroom. Early adolescence has been identified as a time of great change and transition. 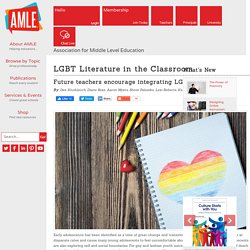 Visible physical changes occur at disparate rates and cause many young adolescents to feel uncomfortable about their differences. Young adolescents are also exploring self and social boundaries. For gay and lesbian youth, suicide is one of the leading causes of death in the United States. According to the Gay, Lesbian, and Straight Education Network's (GLSEN) 2013 national school climate survey, 85% of the surveyed lesbian, gay, bisexual, and transgender (LGBT) youth reported verbal harassment at school, and 56% reported feeling unsafe at school.

School supports, such as a LGBT inclusive curricula, can help create a safer space for LGBT youth (see glsen.org/article/2013-nationalschool- climate-survey). An issue relatively unique to LGBT youth is the feeling of isolation. AMLE and Otterbein U Talk about LGBT Literature in Middle Grades Can a Book Make a Difference? Friends can push your thinking. Conclusion. Lindsay Amer: Why kids need to learn about gender and sexuality. 11 Must-Read LGBTQ+ Young Adult Books That Prove Intersectionality Matters. Courtesy of the publishers Young adult lit has long been a place to find beautifully written, nuanced stories following LGBTQ characters. 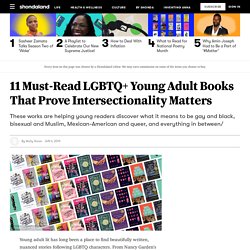 From Nancy Garden's classic '80s lesbian romance Annie on My Mind to Andrew Smith's apocalyptic Grasshopper Jungle, there are plenty of YA books to put on your Pride reading list. But there's also a growing movement in the world of YA books to create intersectional LGBTQ stories. These novels, short stories, graphic novels, and nonfiction collections feature protagonists who are POC — which means while they're navigating their evolving sexualities and gender identities, they're also discovering what it means to be gay and black, bisexual and Muslim, Mexican-American and queer.

The Love & Lies of Rukhsana Ali by Sabina Khan Scholastic Press If You Could Be Mine by Sara Farizan Algonquin Young Readers Aristotle and Dante Discover the Secrets of the Universe by Benjamin Alire Sáenz Simon & Schuster Books for Young Readers For Today I Am A Boy by Kim Fu Soho Teen. 38 Best LGBTQ YA Novels. While queer-lit history stretches back to the days of Sappho mooning over girls, queer YA is significantly younger. 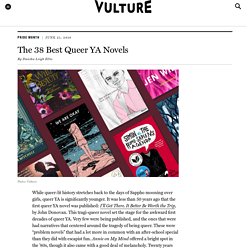 It was less than 50 years ago that the first queer YA novel was published: I’ll Get There. It Better Be Worth the Trip, by John Donovan. This tragi-queer novel set the stage for the awkward first decades of queer YA. Very few were being published, and the ones that were had narratives that centered around the tragedy of being queer. These were “problem novels” that had a lot more in common with an after-school special than they did with escapist fun. Just in the last few years, we seem to be entering a golden age of queer YA. Annie on My Mind by Nancy Garden (1982) This may not have been the first queer YA, but it was the one that put queer YA on the map. Boy Meets Boy by David Levithan (2003)When this came out in the early 2000s, it shattered expectations of queer YA. The Miseducation of Cameron Post by Emily M.

Adaptation by Malinda Lo Inheritance by Malinda Lo. Untitled. Untitled. David Levithan interview: The US author on leading the way in LGBT fiction for young adults. In the dozen years that US author David Levithan has been writing young adult (YA) novels that focus either on or around LGBT issues, teen-marketed books with gay narratives have come out of the closet, and into the mainstream. When his 2003 debut, Boy Meets Boy, became a runaway bestseller on both sides of the Atlantic, it also courted – as runaway bestsellers often do – an attendant controversy, not merely because his lead characters were gay, but because they weren’t persecuted or in peril, but simply in love.

“I guess that the book was seen as pretty daring at the time,” Levithan, 42, says from his home in Hoboken, New Jersey. “It was probably a radical notion in literature back then that teenagers could be gay, and happy, and in love, and that this alone would drive the plot forward. The book would not be seen as groundbreaking in the same way if it were published now because we have, at last, moved on.”

His new book, Hold Me Closer, illustrates just how much.