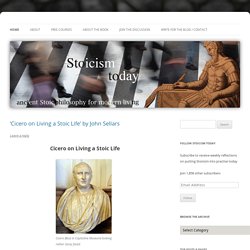 By John Sellars What is involved in living a Stoic life? In his book On Duties (1.107 ff.) the Roman statesman and philosopher Cicero outlines a theory involving four distinct rules for living a life. This is known as the four personae theory and it is usually supposed that Cicero is following a now lost work by the Stoic philosopher Panaetius. Star Trek’s Stoics: The Vulcans. 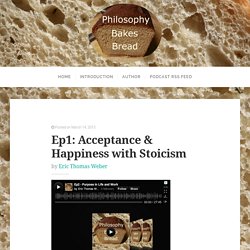 30 Questions to Ask Yourself Before You Die. {Via studioflowerpower on etsy} “Rather than money, than fame, than love…give me truth.” ~ Thoreau I woke up this morning and my life clock marked 30. My first sleep-deprived idea was to pack a small suitcase, get on the first train, move to another country, change my name, change my hair color (or get plastic surgery if needed), and start from scratch. When I don’t know how to deal with life, I hide sometimes. And others, I fight it. Essentials of Buddhism - core concepts.

Religion vs. Humanism: Isaac Asimov on Science and Spirituality. Thought provoking. Christianity Belief Through the Cognitive Lens of Science by Valerie Tarico. Valerie Tarico is a psychologist in Seattle Washington and the author of the book Trusting Doubt. 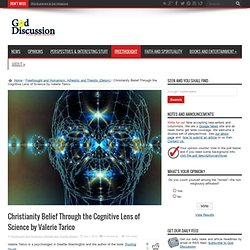 Not long ago she created a series of articles and videos concerning the Cognitive science of Christianity, as well as another series, which I will also post. Believe and Be Saved is the first in this series and the full transcript is on her blog site. Religious belief is one of the most powerful forces in our world. Believers think that it has the power to save us all. Increasingly, doubters fear that the opposite may be true: a tribal mindset, unaccountable to ordinary standards of reason and evidence but armed with state of the art weapons may hasten our extinction.Why is belief so wide-spread and powerful? According to Dr. In this series of videos, Dr Tarico will focus on the following questions: Big Thinkers on the Only Things Worth Worrying About. Morality 1: Good without gods. 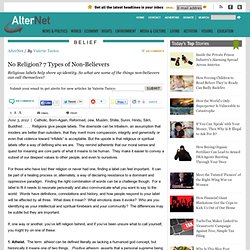 Join our email list: Stay up to date with the latest headlines via email. Catholic, Born-Again, Reformed, Jew, Muslim, Shiite, Sunni, Hindu, Sikh, Buddhist . . . . Religions give people labels. For those who have lost their religion or never had one, finding a label can feel important. It’s a “Story Problem”: What’s Behind Our Messed-Up Economy by David Korten. The peoples of earlier times prospered from the guidance of simple stories that offered answers to their deepest questions. 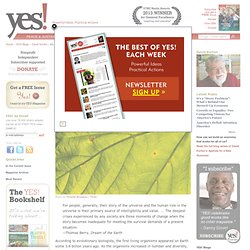 We need those now more than ever. posted Jul 18, 2013 For people, generally, their story of the universe and the human role in the universe is their primary source of intelligibility and value. ... Isaac Asimov on the Thrill of Lifelong Learning, Science vs. Religion, and the Role of Science Fiction in Advancing Society. By Maria Popova “It’s insulting to imply that only a system of rewards and punishments can keep you a decent human being.” 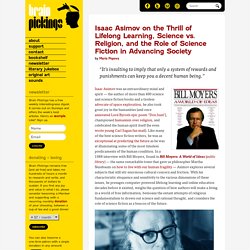 Isaac Asimov was an extraordinary mind and spirit — the author of more than 400 science and science fiction books and a tireless advocate of space exploration, he also took great joy in the humanities (and once annotated Lord Byron’s epic poem “Don Juan”), championed humanism over religion, and celebrated the human spirit itself (he even wrote young Carl Sagan fan mail). Does “Science” Make You Moral? The Effects of Priming Science on Moral Judgments and Behavior. 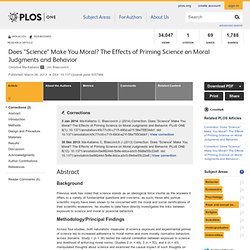 What’s the point of the humanities? 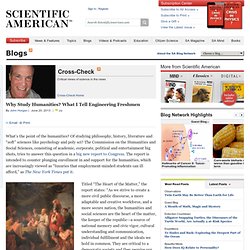 Of studying philosophy, history, literature and “soft” sciences like psychology and poly sci? The Commission on the Humanities and Social Sciences, consisting of academic, corporate, political and entertainment big shots, tries to answer this question in a big new report to Congress. Will Big Data Make Free Will Irrelevant? By Big Think Editors In Crime and Punishment, the Russian student Raskolnikov kills a pawnbroker to test his Nietzschean hypothesis that certain people transcend morality and therefore have the right to commit murder. 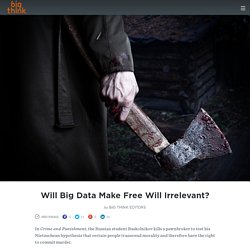 How to Make Mindfulness a Habit With Only a Tiny Commitment. When you sit back and reminisce about your life, it’s almost a given that the most enjoyable and memorable moments are the ones in which you were completely present. 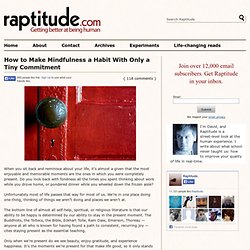 Do you look back with fondness all the times you spent thinking about work while you drove home, or pondered dinner while you wheeled down the frozen aisle? Unfortunately most of life passes that way for most of us. We’re in one place doing one thing, thinking of things we aren’t doing and places we aren’t at. The bottom line of almost all self-help, spiritual, or religious literature is that our ability to be happy is determined by our ability to stay in the present moment. 9 Mind-Bending Epiphanies That Turned My World Upside-Down. Over the years I’ve learned dozens of little tricks and insights for making life more fulfilling.

They’ve added up to a significant improvement in the ease and quality of my day-to-day life. But the major breakthroughs have come from a handful of insights that completely rocked my world and redefined reality forever. The world now seems to be a completely different one than the one I lived in about ten years ago, when I started looking into the mechanics of quality of life. It wasn’t the world (and its people) that changed really, it was how I thought of it. Maybe you’ve had some of the same insights. Online resources for literature, philosophy, and the humanities. Game Theory.

First published Sat Jan 25, 1997; substantive revision Wed May 5, 2010 Game theory is the study of the ways in which strategic interactions among economic agents produce outcomes with respect to the preferences (or utilities) of those agents, where the outcomes in question might have been intended by none of the agents. The meaning of this statement will not be clear to the non-expert until each of the italicized words and phrases has been explained and featured in some examples. Doing this will be the main business of this article. First, however, we provide some historical and philosophical context in order to motivate the reader for the technical work ahead. Home. Point of Inquiry. Promoting critical thinking and skepticism about the central beliefs of society. Rationally Speaking. Philosophy Collection. Einstein on Kindness, Our Shared Existence, and Life's Highest Ideals.

Related:  Thought provoking   -  VUCA   -  Filosofia   -  Critical Thinking   -  Game Theory   -  30 Questions to Ask Yourself Before You Die   -  Essentials of Buddhism - core concepts   -  Morality 1: Good without gods   -  Isaac Asimov on the Thrill of Lifelong Learning, Science vs. Religion, and the Role of Science Fiction in Advancing Society   -  How to Make Mindfulness a Habit With Only a Tiny Commitment   -  9 Mind-Bending Epiphanies That Turned My World Upside-Down   -  Game Theory   -  Home   -  Rationally Speaking   -  Einstein on Kindness, Our Shared Existence, and Life's Highest Ideals   -  Critical Thinking By Example   -  Guide to Philosophy on the Internet (Suber)   -  Stanford Encyclopedia of Philosophy   -  Internet Encyclopedia of Philosophy   -  Education   -  Enterprise