Volkswagen Factory Produces Last ICE Car; Shifts to EVs. 'World First': Driverless Electric Truck Starts Deliveries in Sweden. All-Electric Ferry cuts emission by 95% & costs by 80% The operators of the first all-electric ferry in Norway are starting to get some good data on the vehicle and it’s nothing short of impressive. 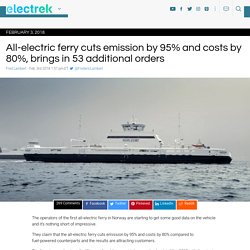 Airbus drones deliver first packages to ships offshore. Harbour Air set to become the first all-electric airline. We just recently discussed that your next flight will be on an electric aircraft. 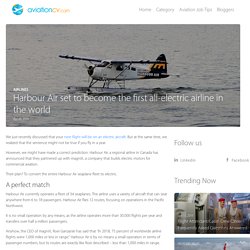 But at the same time, we realized that the sentence might not be true if you fly in a year. However, we might have made a correct prediction. Harbour Air, a regional airline in Canada has announced that they partnered up with magniX, a company that builds electric motors for commercial aviation. Their plan? To convert the entire Harbour Air seaplane fleet to electric. A perfect match Harbour Air currently operates a fleet of 34 seaplanes. Volvo's first electric driverless bus swings into action in Singapore.

Volvo has revealed a pioneering, driverless electric bus that is set to undergo testing, before being put into operation on Singapore's roads. 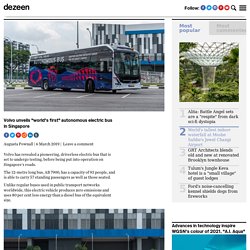 The 12-metre long bus, AB 7900, has a capacity of 93 people, and is able to carry 57 standing passengers as well as those seated. Unlike regular buses used in public transport networks worldwide, this electric vehicle produces zero emissions and uses 80 per cent less energy than a diesel bus of the equivalent size. "We are very proud to be showcasing our electric bus featuring autonomous driving technology. It represents a key milestone for the industry and is an important step towards our vision for a cleaner, safer and smarter city," said Volvo Buses president Håkan Agnevall. Designed in collaboration with Singaporean university Nanyang Technological University (NTU), the driverless bus uses sensors and navigation controls that are operated by artificial intelligence. FedEx Unveils Autonomous Robot for Last-Mile Deliveries.

Ampaire's retrofitted EV planes will soon begin test flights. Sweden Opens World's First Electrified Road for Vehicle Charging. The world’s first electrified road that recharges the batteries of cars and trucks driving on it has been opened in Sweden. 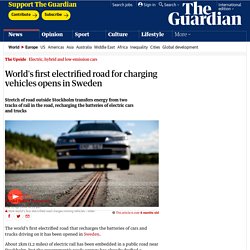 About 2km (1.2 miles) of electric rail has been embedded in a public road near Stockholm, but the government’s roads agency has already drafted a national map for future expansion. Sweden’s target of achieving independence from fossil fuel by 2030 requires a 70% reduction in the transport sector. The technology behind the electrification of the road linking Stockholm Arlanda airport to a logistics site outside the capital city aims to solve the thorny problems of keeping electric vehicles charged, and the manufacture of their batteries affordable. Energy is transferred from two tracks of rail in the road via a movable arm attached to the bottom of a vehicle. First Flight of Electric Plane with no Moving Parts.

Your typical jet plane is full of fast-moving blades. 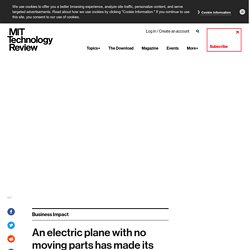 We need the spinning of turbines and propellers to create thrust and let us take to the skies. Or do we? In a paper out today in Nature, MIT researchers report that they have created and flown the first plane that doesn’t require any moving parts. This 2.45-kilogram (5.4-pound) experimental aircraft did not spin turbine blades to propel itself 60 meters (200 feet, the length of a school gym): it used electricity directly. If the technology could be scaled up, it would produce future aircraft that are far safer, quieter, and easier to maintain. Canada Signs on for Fully-Electric Vessels. Reports China is Developing a Semiautonomous Submarine. China, not to be outdone by the U.S., India, Russia, and the dozens of other countries around the world developing autonomous weapons systems, is planning to deploy unmanned submarines that can perform reconnaissance, place mines, and ram “high-value” enemy targets, according to the South China Morning Post. 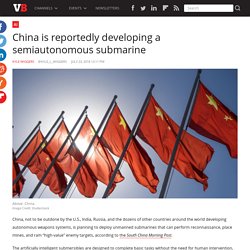 The artificially intelligent submersibles are designed to complete basic tasks without the need for human intervention, Lin Yang, a marine technology equipment director at the Shenyang Institute of Automation, told the South China Morning Post. The goal isn’t to replace human crews entirely — commanders on the ground will monitor the subs’ progress — but they’re said to be able to autonomously change course and depth to avoid detection, distinguish civilian from military vessels, navigate to locations on a map, and scout out hostile territory.

The subs’ chief advantage is cost. Autonomous Sailboat Successfully Crosses the Atlantic. The first unmanned and autonomous sailboat has successfully crossed the Atlantic Ocean, completing the journey between Newfoundland, Canada, and Ireland. 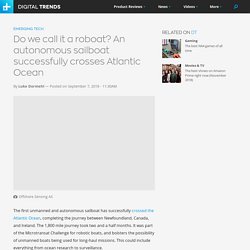 The 1,800 mile journey took two and a half months. It was part of the Microtransat Challenge for robotic boats, and bolsters the possibility of unmanned boats being used for long-haul missions. This could include everything from ocean research to surveillance. Germany Launches World's First Autonomous Tram. Norbert Gresing shook his head as two teenage boys, deep in conversation and wearing earplugs, stepped out in front of his tram. 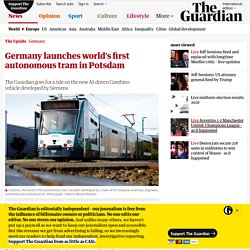 “This is the type of situation I face every day,” said the tram driver, who has 25 years of experience under his belt, as he rang his bell. The boys, apparently oblivious to the green and white 10-tonne, 19-metre-long vehicle, appeared as bright green figures surrounded by fuzzy yellow dots on the screen in front of Gresing. In this case, the boys were not close enough that the tram had to brake, though it did slow down. Volvo's Vera Semi Is Impossible To Drive. Volvo Trucks introduces a new concept semi-trailer that not only is all-electric and autonomous, but completely breaks from the drivers as there is no cab. 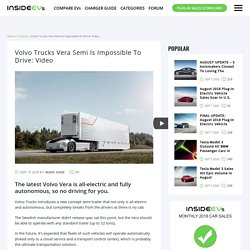 The Swedish manufacturer didn’t release spec sat this point, but the Vera should be able to operate with any standard trailer (up to 32 tons). In the future, it’s expected that fleets of such vehicles will operate automatically (linked only to a cloud service and a transport control center), which is probably the ultimate transportation solution. Growing world population and increasing urbanization are leading to significant challenges to solve environmental issues such as congestion, pollution and noise.

Rising consumption, the fast growth of e-commerce and the wide-spread shortage of drivers put higher demands on efficient transport solutions. “The full potential of the transport industry is yet to be seen. Driverless Taxi Debuts in Tokyo in 'World First' Trial Ahead of Olympics. A self-driving taxi has successfully taken paying passengers through the busy streets of Tokyo, raising the prospect that the service will be ready in time to ferry athletes and tourists between sports venues and the city centre during the 2020 Summer Olympics. 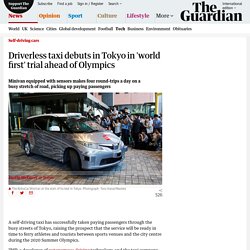 ZMP, a developer of autonomous driving technology, and the taxi company Hinomaru Kotsu, claim that the road tests, which began this week, are the first in the world to involve driverless taxis and fare-paying passengers. The trial took place as Toyota and the transport giant Uber said they were intensifying efforts to develop a self-driving vehicle, pitting themselves against rival initiatives in Japan, the US and Europe. Toyota will invest $500m in the venture, which will develop vehicles based on the carmakers’ Sienna minivans, with a view to start testing in 2021, the firms said this week. Passengers unlock the door themselves and pay their one-way fare – about 1,500 yen ($13) – via a smartphone app. Singapore Airport Trials Facial Recognition To Track Lost & Late Travelers.

Drone 'Taught' to Autonomously Herd Birds Away From Airports. Ultra-Fast EV Chargers Eliminate the Hydrogen "Advantage" Blockchain Used as the Fabric for Sustainable Cities. Air-Legal, All-Electric "Flying Car" Announced in US. Drone Sets Record for Longest Atmospheric Flight. It was able to stay in the air for 25 days straight. The news: Today, Airbus announced the successful landing of the first production model of its spy drone, the Zephyr S HAPS, after a record setting stint in the skies. It was the craft’s first time touching down since it took off from Arizona on July 11. How it works: The 165-pound craft’s longevity is possible because it relies only on solar power to fly. Its preferred cruising altitude is much higher than your average passenger jet—at 70,000 feet, it flies well above weather and standard air traffic—which allows the drone’s solar panels charge both day and night.

Endurance test: The vehicle beat the previous record for longest flight within Earth’s atmosphere without refueling of 14 days, which was set by an earlier Zephyr prototype. Why it matters: Solar powered flight has long been a goal of aviation innovators. MIT's Self-Driving Car Can Navigate Unmapped Roads. ABB EV Charger Delivers 200km of Range in 8 Min.

France Launches Wind-Powered Cruise Ship. China Launches World's First All-Electric Cargo Ship; To Haul Coal. Batteries Published on December 2nd, 2017 | by Steve Hanley December 2nd, 2017 by Steve Hanley Here’s the good news: China has launched the first all-electric cargo ship. According to China Daily, the 230 foot long vessel is equipped with a 2,400 kWh lithium-ion battery that stores enough electrical energy to transport 2200 tons of cargo a distance of 50 miles on a single charge at a top speed of about 8 miles per hour. Time to recharge the battery is given as 2 hours, which is approximately the time needed to unload the ship at its destination. Photo credit: China News/Peng Yonggui. World's First 100% Solar-Powered Train Debuts in Australia. The world’s first 100% solar-powered train is now gliding down tracks in Byron Bay, Australia.

The Byron Bay Railroad Company refurbished a three-kilometer, or almost two-mile, stretch of tracks and restored a heritage train, outfitting it with a 6.5 kilowatt (kW) solar array with flexible solar panels. A limited service launched over the weekend, with full service set to commence in January. Byron Bay Railroad Company restored tracks and a bridge between the town of Byron Bay and the Elements of Byron Bay resort to provide affordable public transportation for locals and visitors. 100 seated passengers and other standing passengers can ride the solar train, and there’s room for luggage, bikes, and surfboards. Boeing Unveils Drone Tanker for Mid-Air Refueling.

Boeing pulled back the curtain on an autonomous plane designed to refuel U.S. Navy fighter jets in midair to extend their range. In October, the Navy issued a request for proposals seeking unmanned refueling capabilities for a variety of combat planes, such as the Boeing F/A-18 Super Hornet, Boeing EA-18G Growler and Lockheed Martin F-35C fighters. Responses to this request, known as the MQ-25 competition, are due Jan. 3. Daimler's eCanter Starts Delivering. Daimler Vehicles for Freight Forwarding Companies Urban Deliveries.