Robots Care for 80% of Elderly Japanese. CARE robots could soon be common place in Japan’s nursing homes and hospitals as the government wants to use the automated bots to plug an ever-growing gap in caregivers for the country’s ageing population. 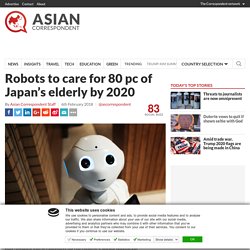 The government is pushing for increased acceptance of this method of support as it predicts robots will care for 80 percent of elderly by 2020, according to a report from The Guardian. With an expected shortfall of 370,000 caregivers by 2025, efforts are being made to quash the skepticism and resistance to technology. SEE ALSO: Are robots the solution for helping Asia’s elderly?

“The mindset by the people on the frontline of caregiving [is] that after all it must be human beings who provide this kind of care,” said Dr Hirohisa Hirukawa, director of robot innovation research at Japan’s National Institute of Advanced Industrial Science and Technology. India Overtakes China As Most Populous Nation.

Image copyright Reuters A new UN study of global population trends predicts that India will overtake China to become the world's most populous nation by 2022. 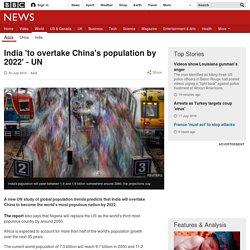 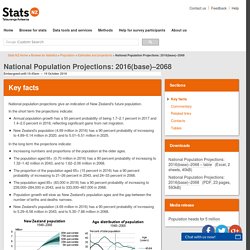 In the short term the projections indicate: Annual population growth has a 50 percent probability of being 1.7–2.1 percent in 2017 and 1.4–2.0 percent in 2018, reflecting significant gains from net migration. New Zealand's population (4.69 million in 2016) has a 90 percent probability of increasing to 4.89–5.14 million in 2020, and to 5.01–5.51 million in 2025. Demographic Changes Pose Tough Challenges for US Colleges. Global Population Hits 8bn. Jun 14, 2013 04:26 PM EDT Earth's population could reach nearly 11 billion by 2100, according to new data from the United Nations' World Population Prospects report, which posits the world population will rise by about 800 million - 8 percent - more people than previous estimates. 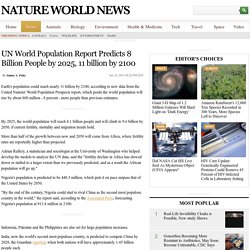 By 2025, the world population will reach 8.1 billion people and will climb to 9.6 billion by 2050, if current fertility, mortality and migration trends hold. More than half of the growth between now and 2050 will come from Africa, where fertility rates are reportedly higher than projected. India the Most Populous Nation. Enacted in 1979 by China’s Communist Party, the controversial “One Child Policy” was primarily meant to slow the country’s rapid population growth, while capping the growing drain on China’s limited resources. 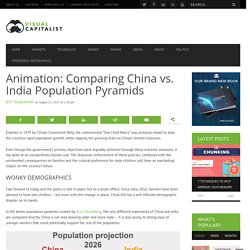 Even though the government’s primary objectives were arguably achieved through these extreme measures, it has been at an extraordinary human cost. The draconian enforcement of these policies, combined with the unintended consequences on families and the cultural preference for male children, will have an everlasting impact on the country’s future. Former Syrian Refugees Turned CEO. Imagine this: when conflict happens, and people flee, they know that – when they reach safety – they will be welcomed sympathetically and efficiently assigned to a safe, stable country, according to an agreed quota. 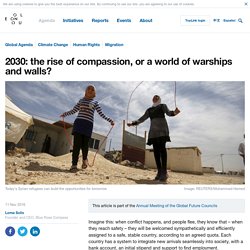 Each country has a system to integrate new arrivals seamlessly into society, with a bank account, an initial stipend and support to find employment. Imagine schoolchildren learning about a bygone age when refugees were treated differently: confined to open-air prisons; prevented by walls and soldiers from reaching a country where they might work and earn; and, if they slip through, living in fear of the law and resented by locals. School trips go to 2016-era refugee camps, preserved for posterity, and kids are amazed that previous generations could have been so hard-hearted and fearful of their fellow humans. First Humans Heading to Mars. “We set sail on this new sea because there is new knowledge to be gained, and new rights to be won, and they must be won and used for the progress of all people.” 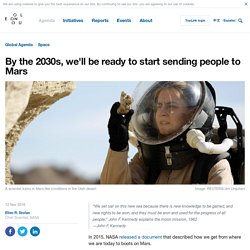 John F. India’s Potential Workforce Rises to 1.08bn as China's Declines. For the past few decades, we haven’t been able to talk about global growth without mentioning China. 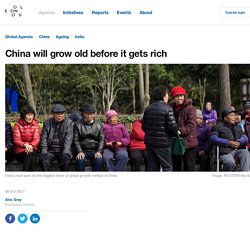 Despite the recent slowdown, the Chinese economy remains the single largest contributor to world GDP growth. A new report by Deloitte Insights, however, says that China will soon be playing second fiddle to India as the biggest driver of global growth. Global Population Hits 9.7bn. Global Population Hits 10bn. 7th September 2016 Global population to reach 10 billion by 2053 The world's population will surpass 10 billion by 2053, according to the latest forecast from the Population Reference Bureau. 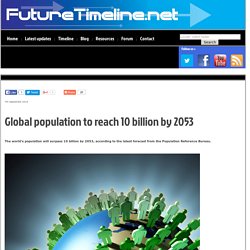 The number of humans on the planet – which currently stands at 7.4 billion – will increase by over one-third to reach 9.9 billion by 2050, according to the latest forecast from the Population Reference Bureau (PRB), a U.S. non-profit organisation based in Washington, DC. 40% of Japanese Population 65+ Japanese companies are facing a workforce automation problem. 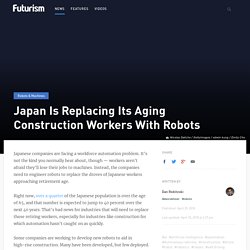 It’s not the kind you normally hear about, though — workers aren’t afraid they’ll lose their jobs to machines. Instead, the companies need to engineer robots to replace the droves of Japanese workers approaching retirement age. Right now, over a quarter of the Japanese population is over the age of 65, and that number is expected to jump to 40 percent over the next 40 years. That’s bad news for industries that will need to replace those retiring workers, especially for industries like construction for which automation hasn’t caught on as quickly. Majority of Men in the US & Europe Infertile. Sperm count in men from North America, Europe, Australia and New Zealand declined by 50-60% between 1973 and 2011, according to a new study from the Hebrew University of Jerusalem. Surprisingly, the study, which analysed data on the sperm counts of 42,935 men, found no decline in sperm counts in men from Asia, Africa and South America, although there was limited data from these areas.

Overall, this is a very disturbing report. There has been a longstanding debate among scientists as to whether sperm counts have decreased or not. But what’s different about this study is the quality of the analysis. It was done in a systematic manner, accounting for several of the problems that had affected previous studies, such as the method used to count sperm and comparing studies performed sometimes decades apart. Japan's Working Population 2/3rds of 2015 Levels. One of the world’s most important and unprecedented economic experiments has been taking place in Japan over the last few years. In December 2012, after decades of economic stagnation, Shinzo Abe was elected Prime Minister in a landslide victory, promising to restore confidence in Japan’s economy. However, the magnitude of Abe’s undertaking is only apparent once you look at the scale of the challenges he faced, starting from the beginning.

Following a period of rapid growth in the late 20th century, the Japanese Yen’s value began to appreciate, delivering a blow to export revenue. The Japanese Government responded with a drastic loosening of monetary policy, resulting in asset and housing prices becoming increasingly overvalued. In a story that has become scarily familiar in the last decade, bank lending soared and a huge price bubble soon developed.