Khanacademy. Khanacademy. SHAKESPEARE ON FILM. Featuring resources on 13 of Shakespeare’s plays, from Romeo and Juliet to Titus Andronicus, the resources cover over 25 different filmed versions of his works. 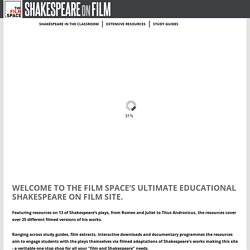 Ranging across study guides, film extracts, interactive downloads and documentary programmes the resources aim to engage students with the plays themselves via filmed adaptations of Shakespeare's works making this site - a veritable one stop shop for all your "film and Shakespeare" needs. Featuring interviews with Kenneth Branagh, Ian McKellen and Adrian Noble as well as film makers such as Richard Linklater and Richard Loncraine, the resources offer insight into the plays themselves, raise issues about Shakespeare’s language and look at the adaptation process but always focusing on Shakespeare’s texts themselves.

An ideal way to get your students started on Shakespeare. An introductory teacher guide and 25 minute documentary looks at a number of issues surrounding studying Shakespeare as well as his place within culture. 1000 idées sur le thème Cartes De New York sur Pinterest  Paintings in movies. Tenement Museum Blog: minding the store. As part of its research for “Minding the Store,” the Museum is working to locate the living descendants of 97 Orchard Street’s shopkeepers, particularly those whose stories will feature prominently in the exhibit itself. 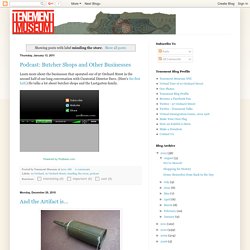 One of those shopkeepers is Israel Lustgarten and his family. In an unrestored, partially-furnished “instructive ruin” apartment, we will tell the story of the Austrian-Jewish Lustgartens and their kosher butcher shop, which was located at 97 Orchard Street c. 1890-1902. In 1899, it was one of 131 kosher butcher shops on the Lower East Side. During the May 1902 kosher meat riot, the front window of the Lustgarten butcher shop was smashed. Recently, with the assistance of Research Intern Danielle Charlap, the Museum located Louise Almy, who is the great-granddaughter of Israel and Goldie Lustgarten and the granddaughter of Fanny Lustgarten and Louis Graubard, who also worked in his in-laws' butcher shop. New York Facts: 10 Facts about New York you didn't know. About Factslides a high traffic content website (over 1 million visits / month) that takes relevant and complex information from NGOs, think tanks, journals, specialized magazines and media and converts it into colorful and animated slideshows that are easy and fun to read, making the information accessible to students, teachers and curious minds for fun, research, lesson planning, and homework. 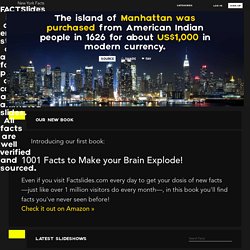 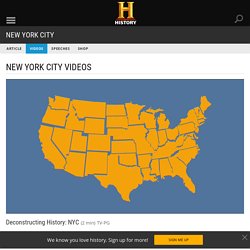 You will soon receive an activation email. Once you click on the link, you will be added to our list. If you do not receive this email, please contact us. To ensure delivery to your inbox, add us to your address book. Oops, there's a problem. This email address has previously opted out from receiving any emails from HISTORY and/or A+E Networks. Facebook Stories. Zinn Education Project. Portraits of Ellis Island Immigrants. Between 1892-1954, Ellis Island served as an immigration inspection station for millions of immigrants arriving into the United States. 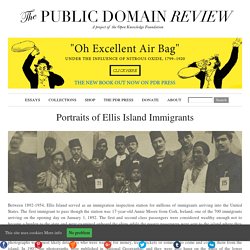 The first immigrant to pass though the station was 17-year-old Annie Moore from Cork, Ireland, one of the 700 immigrants arriving on the opening day on January 1, 1892. The first and second class passengers were considered wealthy enough not to become a burden to the state and were examined onboard the ships while the poorer passengers were sent to the island where they underwent medical examinations and legal inspections. These images of people wearing their folk costumes were taken by amateur photographer Augustus Sherman who worked as the Chief Registry Clerk on Ellis Island from 1892 until 1925. The people in the photographs were most likely detainees who were waiting for money, travel tickets or someone to come and collect them from the island. Morse Code Translator. Text to Morse. 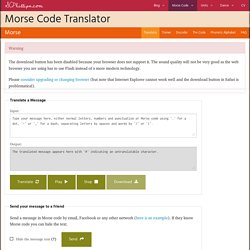 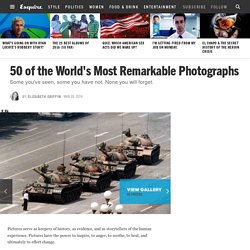 The 25 Best Albums of 2016 (So Far) Quiz: Which American Sex Acts Did We Make Up? I'm Getting Fired from My Job on Monday. El Chapo & the Secret History of the Heroin Crisis By Elizabeth Griffin 8.8k Skip Ad Previous Renowned Architect Zaha Hadid Dies at 65 view gallery 50Photos Pictures serve as keepers of history, as evidence, and as storytellers of the human experience. While it is nearly impossible to choose the most impactful imagery from the millions of photographs, we present this list of 50 of the world's most remarkable.

More view gallery 01of50 01Of50 Little Rock Desegregation Photographer: Will Counts/AP 1957. Will Counts/AP John Kennedy, Jr. Photographer: AP 1963. The 10 Worst Things to Name Your Kid This Year 1Of50 2Of50 Advertisement - Continue Reading Below 3Of50 The Self-Immolation of Buddhist Monk Thich Quang Duc 1963. 4Of50 1965. How to Make Deep Dish Mini Pizzas.