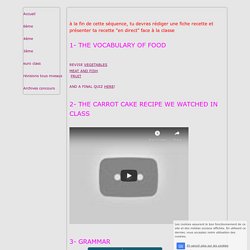 The Beatles - in simple English. An intermediate level English resource. 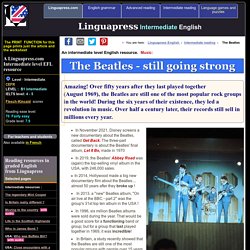 Music: Although they broke up almost 50 years ago, the Beatles are still one of the most popular rock groups in the world! During the six years of their existence, they led a revolution in music. Over half a century later, their records still sell in millions every year. Buffalo Bill's story: Intermediate level English resource. An intermediate level English resource on American history The name “Buffalo Bill? 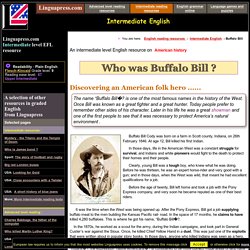 Is one of the most famous names in the history of the West. Once Bill was known as a great fighter and a great hunter. Today people prefer to remember other sides of his character. Later in his life he was a great showman and one of the first people to see that it was necessary to protect America’s natural environment . Buffalo Bill Cody was born on a farm in Scott county, Indiana, on 26th February 1846. In those days, life in the American West was a constant struggle for survival, and Indians and white pioneers would fight to the death to protect their homes and their people. Still looking for Gold. Intermediate English USA: Still looking for Gold GOLD has always attracted people. 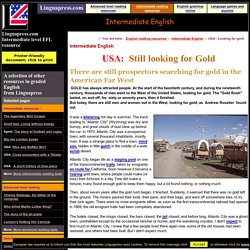 At the start of the twentieth century, and during the nineteenth century, thousands of men went to the West of the United States, looking for gold. The "Gold Rush" lasted, on and off, for, sixty or seventy years, then it finished. But today, there are still men and women out in the West, looking for gold, as Andrew Rossiter found out. GCSE Bitesize: Cowboys and their jobs. Cowboy Bob's Questions and Answers - page 216 - What were the various positions on a cattle drive? [Home] [Willy & Co.] 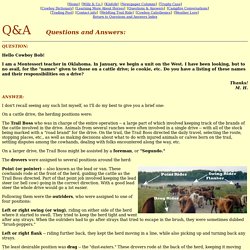 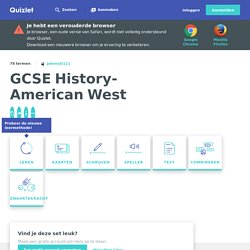 When the Sioux refused, they were declared 'hostile'.→1876 campaign, battle preparationGeneral Philip Sheridan was sent to defeat the Sioux.In June 1876 US armies, led by the generals Alfred Terry and John Gibbon, met at the Yellowstone river.Gibbon was set to march up the Little Bighorn river, and Lt Colonel George Custer was ordered to march round the Wolf mountains, as part of a two-pronged attack on the Sioux camp. →To the Little BighornThe Sioux had been joined by the Cheyenne and Arapaho, making an army of more than 3,000 warriors, armed with Winchester repeating rifles.Custer marched his men through (not round) the Wolf mountains, to arrive at the Sioux camp first.Custer divided his 600 men into three groups.

Definition of Line Camp by Merriam-Webster. The VERY Wild West: Tumbleweeds take over abandoned Wild West theme park in Cornwall after saloon doors closed in 2009. Once full of excited children, the streets of the former tourist attraction are now deserted and covered with grassEerie photographs show how nature is slowly reclaiming what was the Spirit Of The West park near St Columb Major By Harriet Arkell Published: 11:58 GMT, 31 January 2014 | Updated: 14:17 GMT, 31 January 2014 The gunslingers are long gone and tumbleweeds have taken over at this abandoned American Wild West theme park, which hasn't seen a cowboy, not even one in fancy dress, for years. 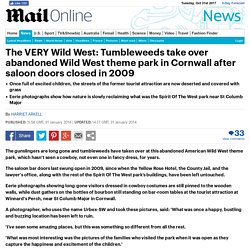 The saloon bar doors last swung open in 2009, since when the Yellow Rose Hotel, the County Jail, and the lawyer's office, along with the rest of the Spirit Of The West park’s buildings, have been left untouched. Eerie photographs showing long-gone visitors dressed in cowboy costumes are still pinned to the wooden walls, while dust gathers on the bottles of bourbon still standing on bar-room tables at the tourist attraction at Winnard's Perch, near St Columb Major in Cornwall. The Wild Wild West- Season 2 Opening Credits. Secondes - Englisharing. Brochure agregation 2017 2018. UNIT 1 Cowboys Wanted TST2S. Why is the American Cowboy Such an Iconic Symbol? - Cowboy Spirit. Why are people so drawn to the idea of the American cowboy?

Pluck a random stranger from any street in the world and ask him to throw out some phrases to describe Americans, and it’s pretty much a guarantee he or she will throw out “cowboy” at some point in the conversation. It’s easy to see the appeal; the cowboy is America as it wants to see itself – courageous, determined, standing up for what’s right, no matter what the cost. Just think of all the good values presented to us from cowboys, the values shaped and molded over a century of archetypes in cinema and television. The cowboy represents all of the qualities any of us would want to be. He’s cool, fearless and brave, dodging headlong into trouble no matter what the odds to stand up for what’s right. Conquest of the west documentary. Manifest Destiny in 2 Minutes! MYTHS AND HEROES - Painting the west - Manifest destiny. An American Studies. The Old West. 7 Fascinating Facts About The Old West.

Top 5 Old West Facts. 5 Misconceptions of the Wild West. Mythology and Western America. Mythology and Western America. The Reality (The American West Part 2) COWBOY MYTH VIDEO!! FunSheet Themes: Cowboys & The Wild West worksheet. Narrative genre. Western, a genre of novels and short stories, motion pictures, and television and radio shows that are set in the American West, usually in the period from the 1850s to the end of the 19th century. Though basically an American creation, the western had its counterparts in the gaucho literature of Argentina and in tales of the settlement of the Australian outback. The genre reached its greatest popularity in the early and middle decades of the 20th century and declined somewhat thereafter. Britannica Quiz. What Makes a Good Western Good? What Are the Characteristics of the Western Genre? Westerns take place in the American West, and are usually set between the 1850s and 1900. 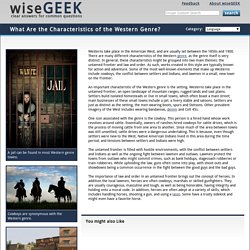 There are many different characteristics of the Western genre, as the genre itself is very distinct. In general, these characteristics might be grouped into two main themes: the untamed frontier and law and order. As such, works created in this style are typically known for action and adventure. Some of the most well-known elements that make up Westerns include cowboys, the conflict between settlers and Indians, and lawmen in a small, new town on the frontier. ☆ What Are Common Themes and Characteristics in Western Movies? What Makes the Western Genre? According to Tim Dirk’s website “FilmSite”, the Western genre can be described as the genre which defined the American film industry. 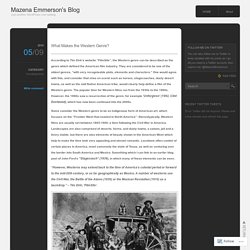 They are considered to be one of the oldest genres, “with very recognisable plots, elements and characters.” One would agree with this, and consider that mise en scené such as horses, stagecoaches, dusty desert towns, as well as the odd Native American tribe, would clearly help define a film of the Western genre. The popular time for Western films ran from the 1930s to the 1960s.

However, the 1990s saw a resurrection of the genre, for example ‘Unforgiven’ (1992, Clint Eastwood), which has now been continued into the 2000s. Clint Eastwood: What Makes A Good Western. What Makes a Western Great? - Great Western Movies. Criteria for greatness in a western movie: Setting: It almost goes without saying that a western is set in the American west, almost always during the period of greatest western expansion and settlement (around 1840 to 1890).

A Western - Action Hero. With a cowboy hat and some ketchup we re-create scenes from an imaginary western in the space we find around us and with the people in the room- the audience cheat at cards, beg our hero to love them and then shoot him down. A street lamp becomes a tree, a bicycle becomes a horse, the road outside becomes the dirt track into the wild desert beyond. A Western collides the immediacy and intimacy of live performance with the epic emotional experience of the cinematic blockbuster, a celebration of a failure to capture the true size and majesty of the Wild West. It is an experiment with the relationship between an audience and an event, a re-imagining of everyday landscapes we inhabit.

We want the scene where our Hero walks into a bar and everyone stops talking. We want the scene where the whore begs to be loved. A Western was Action Hero’s first show and has toured throughout the UK and Europe, in North America, South America, South East Asia and Australia. Once upon a time... The Western A new frontier in Art and Film - The Montreal Museum of Fine Arts. Images - The Western. "In Focus" sections from past issues of Images: from issue #5Italian Gothic Horror Cinema.articles by Gary Johnson, Alain Silver, James Ursini, Tim Lucas, Glenn Erickson, Robert Firsching, and Chris Fujiwara. from issue #4Cliffhangers: the Golden-Age of Serials, featuring Flash Gordon, Spy Smasher, Tiger Woman, and many others.articles by Grant Tracey and Gary Johnson. from issue #3Stars: Some Historical Reflections on the Paradoxes of Stardom in the American Film Industry, 1910-1960.article by Brian Gallagher.