ARTICLE #1 What Is Roundup Ready Corn? Genetically modified (GM) crops have taken an increasing share of the U.S. seed market. 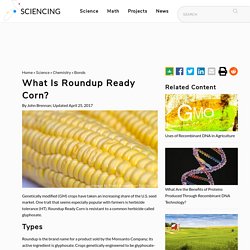 One trait that seems especially popular with farmers is herbicide tolerance (HT). Roundup Ready Corn is resistant to a common herbicide called glyphosate. Types Roundup is the brand name for a product sold by the Monsanto Company; its active ingredient is glyphosate. Crops genetically engineered to be glyphosate-tolerant are often called Roundup Ready crops, although the term is actually a registered trademark of the Monsanto Company and technically refers only to a brand of seed crops sold by Monsanto. Function Glyphosate kills plants by inhibiting an enzyme their cells use to synthesize amino acids, molecules the plants need to make protein. Features.

ARTICLE #2: Insects Are Increasingly Evolving Resistance to Genetically Modified Crops. ARTICLE #3: Taming the Groundcherry: With Crispr, a Fussy Fruit Inches Toward the Supermarket. ARTICLE #4: Documentation:Artificial Selection in Crop Plants - UBC Wiki. Humans have long been directing the evolution of crop plants via artificial selection to best meet their needs. 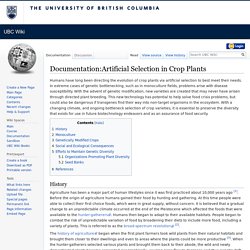 In extreme cases of genetic bottlenecking, such as in monoculture fields, problems arise with disease susceptibility. With the advent of genetic modification, new varieties are created that may never have arisen through directed plant breeding. This new technology has potential to help solve food crisis problems, but could also be dangerous if transgenes find their way into non-target organisms in the ecosystem. With a changing climate, and ongoing bottleneck selection of crop varieties, it is essential to preserve the diversity that exists for use in future biotechnology endeavors and as an assurance of food security. History. ARTICLE #5: GMOs can solve food crisis. SANTA MONICA, Calif. 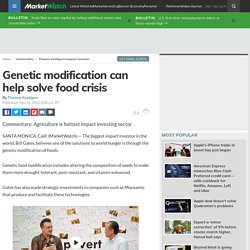 (MarketWatch) — The biggest impact investor in the world, Bill Gates, believes one of the solutions to world hunger is through the genetic modification of foods. Genetic food modification includes altering the composition of seeds to make them more drought-tolerant, pest-resistant, and vitamin-enhanced. Gates has also made strategic investments in companies such as Monsanto that produce and facilitate these technologies. Bono Warns Fiscal Cliff Will Hurt World's Poor The genetic modification (GM) issue is a controversial one, with critics lashing out that such alterations in the food supply create “Frankenfoods” with consequences unknown to our health and the planet’s welfare. ARTICLE #6: Why Farmers think GMOS are good. Farmers choose what seeds to grow based on what is best for their farms, market demand and local growing environments. 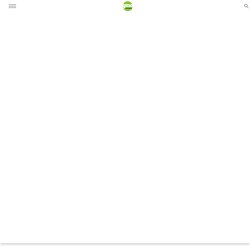 Farmers also look for ways to grow crops using resources more efficiently and with less impact on the environment. More than 18 million farmers around the world, the majority in developing countries, choose to plant genetically modified seeds due to their advantages, which can include reducing the impact of agriculture on their environment, reducing costs via more targeted pesticide use and reducing yield loss or crop damage from weeds, diseases and insects, as well as from extreme weather conditions such as drought. GMOs help farmers reduce agriculture’s impact on the environment and protect the land for future generations. Over the last 20 years, GMOs have helped to reduce pesticide applications by 8.1 percent and increase crop yields by 22 percent. ARTICLE #7 Genetically Modified Foods. Can you think of some possible risks of growing plants that contain genes from other organisms? 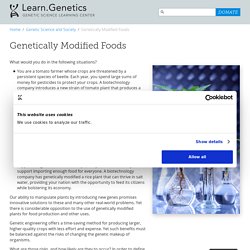 Let's examine our earlier examples: the beetle-resistant tomato, the vaccination banana, and the saltwater rice plant. We've already covered the potential advantages of these plants, but what are the concerns? Cross-breeding with wild populations. For all of these examples, a primary concern is preventing genetically modified versions from mixing with the naturally existing populations of plants from which they're derived. Plants rely on the transfer of pollen, via insects or the air, to breed and produce offspring, and it's difficult to control how they cross-breed in the wild.

In most cases, it's not yet clear how introduction of the non-native gene would affect wild populations. ARTICLE #8: PBS - Should we grow gm crops? Note: We have temporarily discontinued the final vote and tallying options of this feature. 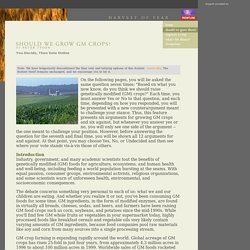 Learn why. The feature itself remains unchanged, and we encourage you to try it. On the following pages, you will be asked the same question seven times: "Based on what you now know, do you think we should raise genetically modified (GM) crops? " ARTICLE #9: GENETICALLY MODIFIED PLANTS: A SOLUTION TO WORLD HUNGER. ARTICLE #10: With an Eye on Hunger, Scientists See Promise in Genetic Tinkering of Plants. Picture #11: How GMO crops help farmers and the environment - Food Dialogues.

Our family farm grows corn and soybeans in Southwest Michigan. 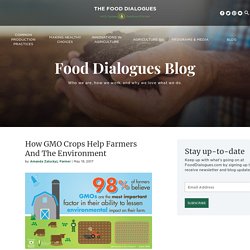 Since their introduction about 20 years ago, we have adopted genetically engineered traits that benefit our farm, particularly the herbicide-resistance trait and the Bt trait. The herbicide-resistant crops allow us to use Round-Up—a relatively safe and non-toxic herbicide—to kill weeds without hurting the corn and soybean plants. The Bt seeds? ARTICLE #12: How Crispr Could Transform Our Food Supply. ARTICLE #13 Cool Jobs: Finding foods for the future. Meet dulse, a seaweed with a secret. 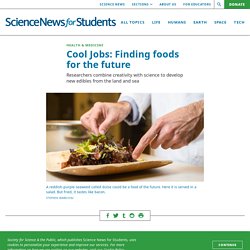 This translucent red alga grows along northern, rocky coastlines of the Atlantic and Pacific oceans. And its colorful, leathery fronds hide a remarkable flavor. When tossed with oil and fried in a pan, they taste like bacon. ARTICLE #14 What is a GMO? Genetically Modified Organisms (GMO): When a gene from one organism is purposely moved to improve or change another organism in a laboratory, the result is a genetically modified organism (GMO). 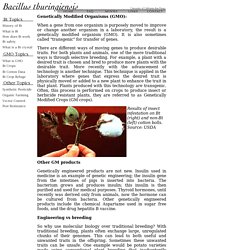 It is also sometimes called "transgenic" for transfer of genes. There are different ways of moving genes to produce desirable traits. ARTICLE #15: Uses of Recombinant DNA in Agriculture. ARTICLE #16 GMOs: Facts About Genetically Modified Food. A genetically modified organism, or GMO, is an organism that has had its DNA altered or modified in some way through genetic engineering. 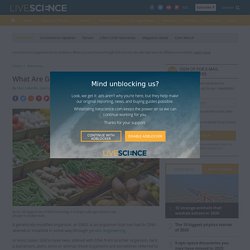 In most cases, GMOs have been altered with DNA from another organism, be it a bacterium, plant, virus or animal; these organisms are sometimes referred to as "transgenic" organisms. Genetics from a spider that helps the arachnid produce silk, for example, could be inserted into the DNA of an ordinary goat. It sounds far-fetched, but that is the exact process used to breed goats that produce silk proteins in their goat milk, Science Nation reported. Their milk is then harvested, and the silk protein is then isolated to make a lightweight, ultrastrong silk material with a wide range of industrial and medical uses. The dizzying range of GMO categories is enough to boggle the mind. These are more comparatively wild examples, but GMOs are already very common in the farming industry. Genetically modified food. ARTICLE #17 US farmer's pros and cons of GMO crops. ARTICLE #18: PBS - harvest of fear.