'There is no water. Why should people stay here?' Every morning Dagadu Beldar, 75, wakes up and cooks rice and lentils in his village home in India's western state of Maharashtra. 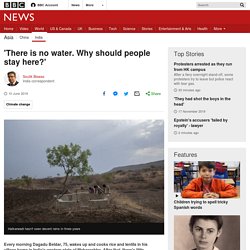 After that, there's little else to do. For the past three years, Mr Beldar has lived alone in his gloomy one-room hut in Hatkarwadi, a stony hillside outback ringed by forests. Drought forced his wife and three sons out of the village. The earth was parched and the wells were dry. There was little water to drink and bathe in, and the family's millet farm lay barren. Two sons found work at a sugar factory in Sangli, a cane-growing district some 400km (248 miles) away. With age, Mr Beldare is going deaf. "He's a very lonely man. Across the lane, 75-year-old Kishan Sadgar's only son left home a decade ago to work in a sugar factory far away. A few doors away, Saga Bai lives with her 14-year-old deaf mute daughter, Parvati. And Ganesh Sadgar, the only graduate in the village, is unable to find a bride because "no woman wants to come here because there's no water".

Impact of drought. Drought 2019. Summer 2018. Drought 2018. Dry and hot weather beginning to have widespread effect on rivers. All these locations now have levels below normal for this time of year.… Summer 1976 - Heatwave and drought. WRCC sur Twitter : "Update to estimate of likelihood of reaching Water Year median precipitation. Likelihoods dropped significantly this week. Locations with >10% likelihood values are generally those which typically experience some warm season precipitat.

Yes, really! My total rainfall for 2017 in East Berkshire was just 522mm - that's around 140mm below average, A farmer and his two sons during a dust storm in Cimarron County, Oklahoma, April 1936. (Photo by Arthur Rothstein) The unprecedented drought that's crippling Montana and North Dakota. Connecting Research: The Forum · Exploring the impact of drought on 2017 wheat crop. By Professor Donal O’Sullivan, Professor of Crop Science in the School of Agriculture, University of Reading Unfavourable weather patterns and their impact on crop production have again been a major talking point in farming circles. 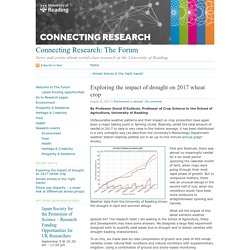 Bizarrely, whilst the total amount of rainfall in 2017 to date is very close to the historic average, it has been distributed in a very unhelpful way (as data from the University’s Meteorology Department weather station helpfully plotted out in an up-to-the-minute annual graph shows). Weather data from the University of Reading shows the drought in April and summer deluge First and foremost, there was almost no meaningful rainfall for a six-week period spanning the calendar month of April, when crops were going through their most rapid phase of growth.

But to compound matters, there was an unusual deluge in the second half of July, when dry conditions would have been more conducive to straightforward ripening and harvest. The results were stark. *****Quarter of England’s rivers at risk of running dry, finds WWF. A quarter of England’s rivers are at risk of running dry, with devastating consequences for wildlife, according to data obtained by WWF under freedom of information rules. 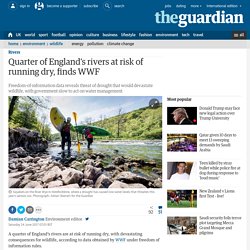 Fish are most obviously affected when rivers slow to a trickle, particularly those that migrate upstream such as salmon, trout, eels and lampreys. But animals such as water voles are also harmed, as they are unable to escape predators by fleeing into rivers to reach underwater entrances to their burrows. Birds such as kingfishers, sandpipers and dippers also suffer, as the insects and small fish they feed on die out. Driest ten months in 100 years recorded in southern England. By New Scientist staff and Press Association Matthew Chattle/REX/Shutterstock The last 10 months were the driest July to April for southern England in records stretching back more than 100 years, figures reveal. 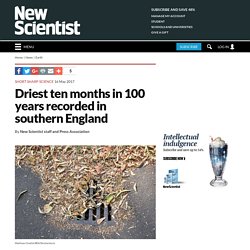 April was “exceptionally” dry with most of the UK seeing less than half the average rainfall, the Centre for Ecology and Hydrology (CEH) said. Advertisement Some parts of southern England and eastern Scotland had less than a fifth of the normal rainfall for the month, it said. For the UK overall, April was joint ninth driest in records dating back to 1910, recording 49 per cent of average rainfall. The southern region of England registered its driest July-to-April period in the records, the CEH said. As a result soils were dry, river flows were substantially below average for most of the UK, and most aquifers in south-east England were below normal, the CEH’s monthly hydrological summary for the country showed.

More on these topics: "And for the UK as a whole it has been the driest Oct-Mar period since 1995/96" That awesome feeling when a school librarian makes your book into a door ❤️@NGKidsBks @DanRavenEllison @KateOlesin. Defining Snow Drought and Why It Matters. On 12 February, water resource managers at the Oroville Dam issued an evacuation warning that forced some 180,000 Californians to relocate to higher ground. 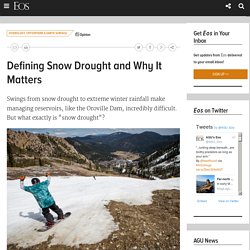 The story of how conditions got to this point involves several factors, but two clearly stand out: the need to prevent water shortages during a record drought, followed by one of the wettest October–February periods in California history. The situation at Oroville Dam highlights difficulties that many reservoir managers face in managing flood risks while simultaneously storing water to mitigate severe droughts and smaller snowpacks. Central to this difficulty is the idea of “snow drought,” a term that’s gaining traction in both scientific and lay literature. Snow drought refers to the combination of general drought and reduced snow storage.

However, among references to snow drought, we observe conditions that reflect Here we use snow conditions during winter 2015 on the West Coast of the United States to illustrate the difference. *****These 257 drought maps show California's deep drought and current recovery. *****Droughts in California (2011 - 2016 animation)