Infographic: What Tools Developers Actually Use. Native Apps vs. Mobile Web: Pros and Cons [infographic] I’m becoming a huge fan of infographics, they are everywhere. 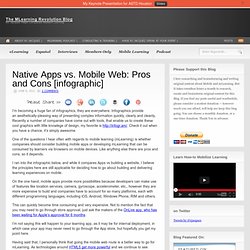 Infographics provide an aesthetically-pleasing way of presenting complex information quickly, clearly and cleanly. Recently a number of companies have come out with tools, that enable us to create these cool graphics with little knowlege of design, my favorite is Check it out when you have a chance, it’s simply awesome. One of the questions I hear often with regards to mobile learning (mLearning) is whether companies should consider building mobile apps or developing mLearning that can be consumed by learners via browsers on mobile devices. Like anything else there are pros and cons, so it depends.

I ran into the infographic below, and while it compares Apps vs building a website, I believe the principles here are still applicable for deciding how to go about building and delivering learning experiences on mobile. This can quickly become time consuming and very expensive. Internet_porn.jpg 650×2,631 pixels. How Much Data Is Created Every Minute? [INFOGRAPHIC] Thursday's sporadic Twitter outages gave addicts like us the shakes. 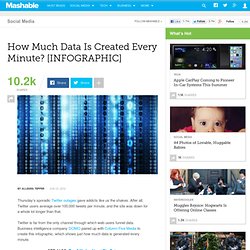 After all, Twitter users average over 100,000 tweets per minute, and the site was down for a whole lot longer than that. Twitter is far from the only channel through which web users funnel data. Business intelligence company DOMO paired up with Column Five Media to create this infographic, which shows just how much data is generated every minute. SEE ALSO: Top 5 Myths About Big Data Next time you run a Google search, think about the fact that it's just one of 2 million that Google will receive in that minute. Check out the stats below to learn the amount of data created across all of your favorite platforms. HUMAN RESOURCES - Comment devenir graphiste ? 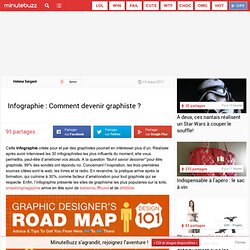 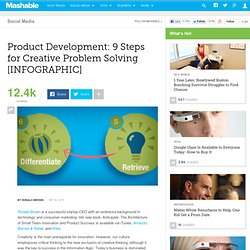 His new book, Anticipate. The Architecture of Small Team Innovation and Product Success is available via iTunes, Amazon, Barnes & Noble, and Kobo. Creativity is the main prerequisite for innovation. However, our culture emphasizes critical thinking to the near exclusion of creative thinking (although it was the key to success in the Information Age). Infogr.am Makes Infographic Creation and Sharing Simple. If you read things on the Internet, like The Next Web, you’ve probably seen an infographic. 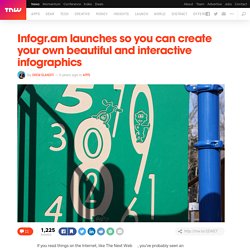 The art of the infographic depends on how what data is being presented, how cleanly, and how attractively. A well-done infographic is more interesting than a text-only post of data. The only problem with this type of content is that it’s extremely difficult to do if you don’t have a staff of designers and statisticians. Managing the data, creating a layout, testing the design, and getting sign-off on an infographic before it goes live is a long and frustrating process.

One company, Infogr.am, wants to make the infographic creation process an easy one that anyone can do. Queen's Jubilee: air travel 60 years ago and today [infographic] Death by Desk Job: How to Fight It [INFOGRAPHIC] Your desk job can kill you. 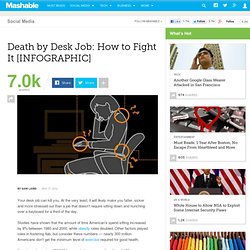 At the very least, it will likely make you fatter, sicker and more stressed out than a job that doesn't require sitting down and hunching over a keyboard for a third of the day. Studies have shown that the amount of time American's spend sitting increased by 8% between 1980 and 2000, while obesity rates doubled. Other factors played roles in fostering flab, but consider these numbers — nearly 300 million Americans don't get the minimum level of exercise required for good health. Americans burn about 50,000 fewer calories per year than they did 50 years ago, and the portion of jobs that require physical activity has declined by about 30% since 1960. So how can you fight your desk job's slow but steady stranglehold on your health and maybe live a few years longer? Creative Graphic Resume Designs Which Will Amaze You - 53 Examples.

Having a creative resume design as a designer of any sort is a must. 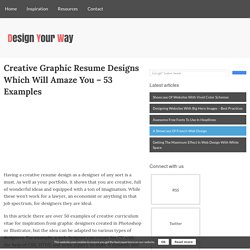 As well as your portfolio, it shows that you are creative, full of wonderful ideas and equipped with a ton of imagination. While these won’t work for a lawyer, an economist or anything in that job spectrum, for designers they are ideal. In this article there are over 50 examples of creative curriculum vitae for inspiration from graphic designers created in Photoshop or Illustrator, but the idea can be adapted to various types of designers. For example, a web designer can create his CV with the help of CSS, HTML and some jQuery to make it dynamic and attractive, whereas a Flash designer could use… well, Flash. 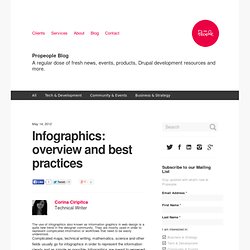 They are mostly used in order to represent complicated information or workflows that need to be easily understood. Complicated maps, technical writing, mathematics, science and other fields usually go for infographics in order to represent the information clearly and as simple as possible. Infographics are meant to represent conceptual information without intimidating the end user. Easel.ly. Easel.ly is a cool way to create your own free infographics  How to Create Awesome Infographics. Even if information is highly out of ordinary and attention-grabbing, if your content contains lengthy plain text without illustration or images whatsoever, the entire page becomes dull and unimaginative. 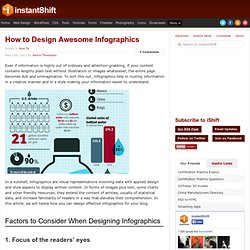 To sort this out, infographics help in routing information in a creative manner and in a style making your information easier to understand. In a nutshell, infographics are visual representations involving data with applied design and style aspects to display written content. In forms of images plus text, some charts and other friendly resources, they extend the content of articles, usually of statistical data, and increase familiarity of readers in a way that elevates their comprehension. In this article, we will tackle how you can design effective infographics for your blog.

[Infographic] Taking HTML5 to the Next Level for Mobile. By 2013, there will be more than 1 billion HTML5-capable browsers in use throughout the world. 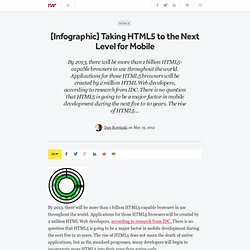 Applications for those HTML5 browsers will be created by 2 million HTML Web developers, according to research from IDC. There is no question that HTML5 is going to be a major factor in mobile development during the next five to 10 years. The rise of HTML5 does not mean the death of native applications, but as the standard progresses, many developers will begin to incorporate more HTML5 into their apps than native code. By 2015, IDC predicts that 80% of all mobile apps will be based wholly or in part on HTML5. It makes sense: As HTML5 evolves, it gains access to many features that were once the sole domain of native code.

CPR Renewal Certificate Course. State of the Internet 2012 [Infographic] [Infographic] How People Use iPhones and Androids in China. Did you know that the majority of Android users in China are on a 2G network? That about 44% of Android users in China use HTC phones? That almost 14% of iPhone users in China have spent $10-$20 on paid apps, with 9% spending more than $50? China has the largest mobile-phone installed base (by volume) in the world, and just as it is in the U.S., the Chinese market is an Android vs. iPhone war. So how do people in China use their smartphones, and how does that compare to those in the United States? As it is in the U.S., the top app categories in China are games and social networking, according to Chinese mobile ad firm Guohe. Also just like in the U.S., content is apparently king in China.

10 Essential Fiscal Charts. Anatomy Of A Hurricane. App Developers Don't Make Enough To Start Businesses. Infographic: The Future Of Hotels Is Green. Tipping Etiquette Around the World. Visualization. Global terrain maps from Stamen Missed this one from last month. Stamen announced the release of a whole lot of new terrain map tiles for around the world.

Four billion of them. The original Terrain… Coca Cola World- Infograph. IMI-03132012-InfographicUpdated. How The INTERNET Works [INFOGRAPHIC] 20 Examples Of Infographs That You Don’t See Every Day. I think we all know what an infograph is, and nowadays they are increasingly popular. The bad thing is that almost all of them are becoming boring and very similar. In this article I have collected 20 infographs that are very unique design and also interesting subjects. Social Media Graphics.

Where do ideas come from INFOGRAPHIC « Newhouse Ad Creative. 20 things that happen in 1 minute. How To Train Yourself to Speed Read. Bible Age Chart and Genesis 47 - New2Torah – Torah Observant Followers of Jesus/Yeshua – Hebrew Roots. What Are The Hardest Languages To Learn? [INFOGRAPHIC] Infographic Of The Day: The Insane Choices You Face At The Drugstore. Infographic Quickstart Guide to Social Media for Business. The Android Story. [INFOGRAPHIC] The Imperfections of the U.S. Judicial System. Save the words.

The Most Powerful Colors in the World [infographic] How To Lead A Creative Life [Infographic] 60 Seconds - Things That Happen On Internet Every Sixty Seconds. The Coming Water War- InfoGraph. The Forex Market Explained.