CEO pay increased 14% in 2019, and now make 320 times their typical workers. In 2019, CEO compensation at the United States’ top 350 firms grew 14% to $21.3 million on average, according to new analysis by EPI Distinguished Fellow Lawrence Mishel and Research Assistant Jori Kandra. 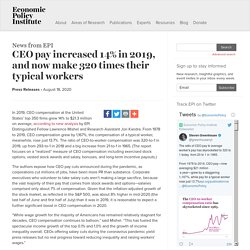 From 1978 to 2019, CEO compensation grew by 1,167%; the compensation of a typical worker, meanwhile, rose just 13.7%. The ratio of CEO-to-worker compensation was 320-to-1 in 2019, up from 293-to-1 in 2018 and a big increase from 21-to-1 in 1965. (The report focuses on a “realized” measure of CEO compensation including exercised stock options, vested stock awards and salary, bonuses, and long-term incentive payouts.) The authors expose how CEO pay cuts announced during the pandemic, as corporations cut millions of jobs, have been more PR than substance.

Corporate executives who volunteer to take salary cuts aren’t making a large sacrifice, because the vast majority of their pay that comes from stock awards and options—salaries comprised only about 7% of compensation. U.S. Tax & Spending Explorer. New tool examines how US taxes & spending affect income inequality. Today, the Economic Policy Institute is launching a website aimed at shedding light on how the U.S. tax and spending system affects household income up and down the income distribution. 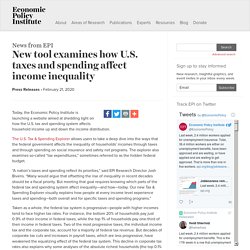 The U.S. Tax & Spending Explorer allows users to take a deep dive into the ways that the federal government affects the inequality of households’ incomes through taxes and through spending on social insurance and safety net programs. The explorer also examines so-called “tax expenditures,” sometimes referred to as the hidden federal budget. “A nation’s taxes and spending reflect its priorities,” said EPI Research Director Josh Bivens. “Many would argue that offsetting the rise of inequality in recent decades should be a fiscal priority. Taken as a whole, the federal tax system is progressive—people with higher incomes tend to face higher tax rates. While the federal tax system tends to reduce inequality, state and local taxes tend to increase it. A profile of the working poor, 2016 : BLS Reports: U.S. Bureau of Labor Statistics. 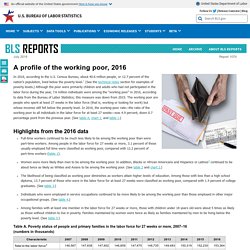 Is It Race or Class? For indispensable reporting on the coronavirus crisis and more, subscribe to Mother Jones' newsletters. 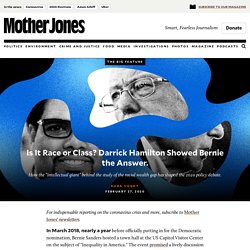 In March 2018, nearly a year before officially putting in for the Democratic nomination, Bernie Sanders hosted a town hall at the US Capitol Visitor Center on the subject of “Inequality in America.” The event promised a lively discussion of “the rise of the oligarchy and the collapse of the American middle class”—lively in large part due to the presence of three people onstage who would soon play central roles in shaping the policy contours of the Democratic presidential primary. Population health in an era of rising income inequality: USA, 1980–2015. 1.Saez E Striking it richer: the evolution of top incomes in the United States (updated with 2014 preliminary estimates). 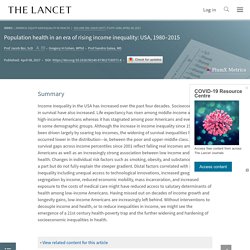 Long Reach of Early Childhood Poverty Duncan. 5/17/15: Social Consequences of Poverty: An Empirical Test on Longitudinal Data. 10/28/13: Lasting Impacts of Poverty on the Brain. Poverty shapes people in some hard-wired ways that we're only now beginning to understand. 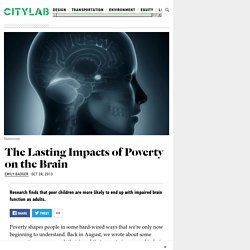 Back in August, we wrote about some provocative new research that found that poverty imposes a kind of tax on the brain. It sucks up so much mental bandwidth – capacity spent wrestling with financial trade-offs, scarce resources, the gap between bills and income – that the poor have fewer cognitive resources left over to succeed at parenting, education, or work. Experiencing poverty is like knocking 13 points off your IQ as you try to navigate everything else. 10/22/12: Effects of Poverty on the Brain. 8/9/13: How Poverty Taxes the Brain. Scientists have discovered that being poor actually impairs our cognitive abilities. 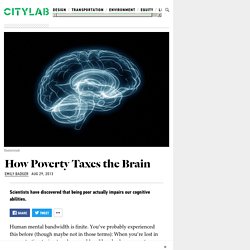 Human mental bandwidth is finite. You’ve probably experienced this before (though maybe not in those terms): When you’re lost in concentration trying to solve a problem like a broken computer, you’re more likely to neglect other tasks, things like remembering to take the dog for a walk, or picking your kid up from school. This is why people who use cell phones behind the wheel actually perform worse as drivers. 3/13/19: 3,736 US Women with Disabilities Lose Jobs. Washington, D.C., March 13 – As we celebrate Women’s History Month, RespectAbility recognizes the contributions made and the important presence of women to the United States. 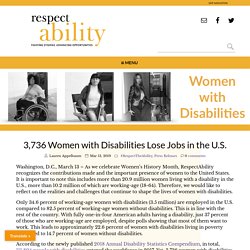 This is in line with the rest of the country. With fully one-in-four American adults having a disability, just 37 percent of those who are working-age are employed, despite polls showing that most of them want to work. Women with disabilities gained jobs in only 21 out of 50 states. Women of Color Face Additional Barriers. 10/7/15: Housing Vouchers Reduce Hardship & Provide Platform for Long-Term Gains Among Children. Poverty Guidelines. 1/22/19: Policy Brief: Despite Recent Increases in Some States, TANF Cash Benefits Are Still Too Low. 11/28/18: TANF Reaching Few Poor Families. SoilGeneration. 4/4/19: Surviving in the Shadows. My body is a place I visit. 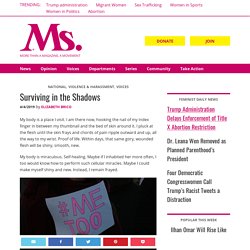 I am there now, hooking the nail of my index finger in between my thumbnail and the bed of skin around it. I pluck at the flesh until the skin frays and chords of pain ripple outward and up, all the way to my wrist. Proof of life. Within days, that same gory, wounded flesh will be shiny, smooth, new. Money. Work. Elders. Racism. Human Rights. Justicia. Crime. Health.