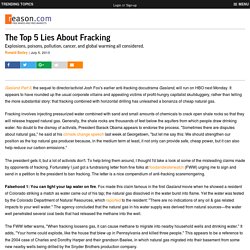 It appears to have rounded up the usual corporate villains and appealing victims of profit-hungry capitalist skullduggery, rather than telling the more substantial story: that fracking combined with horizontal drilling has unleashed a bonanza of cheap natural gas. Fracking involves injecting pressurized water combined with sand and small amounts of chemicals to crack open shale rocks so that they will release trapped natural gas. Generally, the shale rocks are thousands of feet below the aquifers from which people draw drinking water. No doubt to the dismay of activists, President Barack Obama appears to endorse the process. The president gets it, but a lot of activists don't. Falsehood 1: You can light your tap water on fire. The FWW letter warns, "When fracking loosens gas, it can cause methane to migrate into nearby household wells and drinking water. " FRAC Act (S. 1135. GovTrack’s Bill Summary We don’t have a summary available yet. 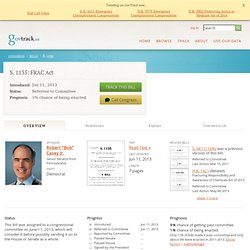 Library of Congress Summary The summary below was written by the Congressional Research Service, which is a nonpartisan division of the Library of Congress. 6/11/2013--Introduced. What is the "Halliburton Loophole?" Under President Bush and Vice President Cheney, fracking was exempted from significant EPA regulation Hydraulic fracturing, an increasingly common aspect of the oil and gas production process, is not subject to the same standards as other industries when it comes to protecting underground sources of drinking water Hydraulic fracturing involves the injection of fluids including toxic chemicals into oil or gas wells at very high pressure Other forms of underground injection are regulated to protect drinking water, but in 2005 Congress created exemptions for hydraulic fracturing to benefit Halliburton and other oil and gas companies. 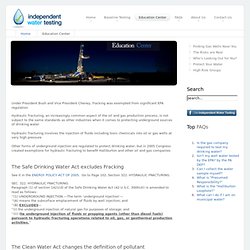 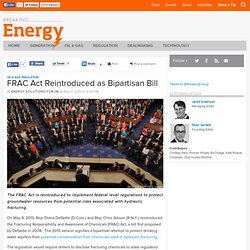 On May 9, 2013, Rep. Diana DeGette (D-Colo.) and Rep. Chris Gibson (R-N.Y.) reintroduced the Fracturing Responsibility and Awareness of Chemicals (FRAC) Act, a bill first proposed by DeGette in 2008. The 2013 version signifies a bipartisan attempt to protect drinking water aquifers from potential contamination from chemicals used in hydraulic fracturing. The legislation would require drillers to disclose fracturing chemicals to state regulatory agencies or the Environmental Protection Agency (EPA), depending on respective regulatory framework. 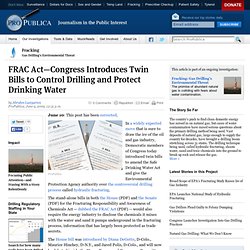 ProPublica In a widely expected move [2] that is sure to draw the ire of the oil and gas industry, Democratic members of Congress today introduced twin bills to amend the Safe Drinking Water Act and give the Environmental Protection Agency authority over the controversial drilling process [3] called hydraulic fracturing [4]. The stand-alone bills in both the House [5] (PDF) and the Senate [6] (PDF) for the Fracturing Responsibility and Awareness of Chemicals Act -- dubbed the FRAC Act [7] (PDF) -- would also require the energy industry to disclose the chemicals it mixes with the water and sand it pumps underground in the fracturing process, information that has largely been protected as trade secrets. The House bill [5] was introduced by Diana DeGette [2], D-Colo., Maurice Hinchey, D-N.Y., and Jared Polis, D-Colo., and will now be debated inside the House Energy and Commerce Committee. A matching Senate version [6] was offered by Sen.

S Study of Hydraulic Fracturing and Its Potential Impact on Drinking Water Resources. At the request of Congress, EPA is conducting a study to better understand any potential impacts of hydraulic fracturing on drinking water resources. 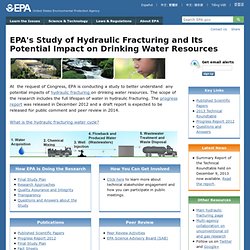 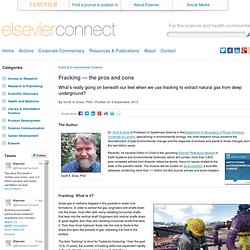 Elias, PhD Dr. Scott A. Elias is Professor of Quaternary Science in theDepartment of Geography of Royal Holloway, University of London, specializing in environmental biology. Recently, he became Editor-in-Chief of the upcoming Elsevier Reference Module in Earth Systems and Environmental Sciences, which will contain more than 3,800 peer-reviewed articles from Elsevier reference works, many on issues related to the state of the planet's health.

Fracking: What is it? Fracking for shale gas has become big business, transforming the US energy landscape. Shale gas is methane trapped in tiny pockets in shale rock formations. The term "fracking" is short for "hydraulic fracturing. " What are the benefits? So much natural gas has been extracted through fracking in recent years that US carbon emissions are actually falling.

What Is Hydraulic Fracturing? What is fracking and why is it controversial? Drilling companies suggest trillions of cubic feet of shale gas may be recoverable from underneath parts of the UK through a process known as "fracking". 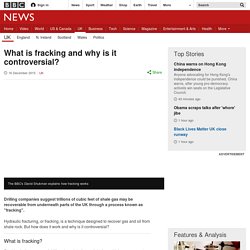 Hydraulic fracturing, or fracking, is a technique designed to recover gas and oil from shale rock. Task force to explore possible fracking, earthquake link. The New Oil Landscape - Video: What is Fracking?