Sharks and marine animals. Mammals. Eyes 500 Million Years Old, Australian Scientist Says. Prof Trevor Lamb of the Australian National University has published a major scientific review of the origin of the vertebrate eye and vision, summarizing the results of hundreds of studies. 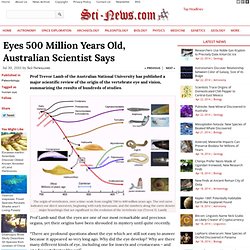 The origin of vertebrates, over a time-scale from roughly 700 to 400 million years ago. The red curve indicates our direct ancestors, beginning with early metazoans, and the numbers along the curve denote major branchings that are significant to the evolution of the vertebrate eye (Trevor D. Lamb) Prof Lamb said that the eyes are one of our most remarkable and precious organs, yet their origins have been shrouded in mystery until quite recently. “There are profound questions about the eye which are still not easy to answer because it appeared so very long ago. The deep origins of ‘sight’ go back more than 700 million years when the earth was inhabited only by single-celled amoeba-like animals, algae, corals and bacteria.

Bibliographic information: Trevor D. Humans, not climate, to blame for Ice Age-era disappearance of large mammals, study concludes. Was it humankind or climate change that caused the extinction of a considerable number of large mammals about the time of the last Ice Age? 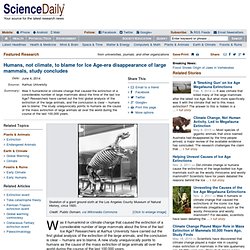 Researchers at Aarhus University have carried out the first global analysis of the extinction of the large animals, and the conclusion is clear -- humans are to blame. A new study unequivocally points to humans as the cause of the mass extinction of large animals all over the world during the course of the last 100,000 years. "Our results strongly underline the fact that human expansion throughout the world has meant an enormous loss of large animals," says Postdoctoral Fellow Søren Faurby, Aarhus University. Was it due to climate change? For almost 50 years, scientists have been discussing what led to the mass extinction of large animals (also known as megafauna) during and immediately after the last Ice Age.

The 7 Most Terrifyingly Huge Things in the History of Nature. We may be the undisputed kings of the food chain, but when it comes to being pant-soilingly huge, we come up a bit short. 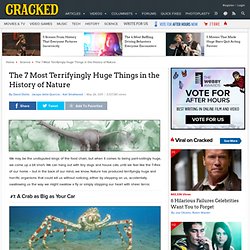 We can hang out with tiny dogs and house cats until we feel like the T-Rex of our home -- but in the back of our mind, we know. Nature has produced terrifyingly huge and horrific organisms that could kill us without noticing, either by stepping on us, accidentally swallowing us the way we might swallow a fly or simply stopping our heart with sheer terror. A Crab as Big as Your Car They say a picture is worth a thousand words. Via Wikimedia CommonsIn this case, almost all of them are some variation of AHHHHHHHHHHHHHHHHHHHH! Japanese spider crabs, in what we can only assume is a cruel joke from God, possess all the most terrifying qualities of each of its namesakes.

Long spindly legs to help it creep through your nightmares.A terrifyingly disproportionate body just to freak you out.The ability to trigger the primal arachnophobe inside us all. Via NHM And from crabs it has: Two Billion Year Old Fossils Point to Early Terrestrial Life. A new study, published in the journal Precambrian Research, describes evidence that primitive forms of life existed on land 2.2 billion years ago. 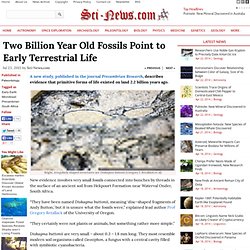 Bright, irregularly shaped structures are Diskagma buttonii (Gregory J. Retallack et al) New evidence involves very small fossils connected into bunches by threads in the surface of an ancient soil from Hekpoort Formation near Waterval Onder, South Africa. “They have been named Diskagma buttonii, meaning ‘disc-shaped fragments of Andy Button,’ but it is unsure what the fossils were,” explained lead author Prof Gregory Retallack of the University of Oregon. “They certainly were not plants or animals, but something rather more simple.” Diskagma buttonii are very small – about 0.3 – 1.8 mm long. Prof Retallack said that there is independent evidence for cyanobacteria, but not fungi, of the same geological age, and these new fossils set a new and earlier benchmark for the greening of the land. Reconstruction of Diskagma buttonii (Gregory J. Rock microbes found in WA's Pilbara could be earliest signs of life on Earth. Updated Wed 13 Nov 2013, 12:54pm AEDT Researchers say they have potentially discovered the earliest signs of life on Earth in Western Australia's Pilbara, a breakthrough that may help scientists better understand the solar system. 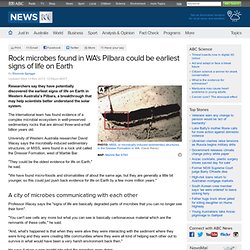 The international team has found evidence of a complex microbial ecosystem in well-preserved sedimentary rocks that are almost three-and-a-half billion years old. University of Western Australia researcher David Wacey says the microbially-induced sedimentary structures, or MISS, were found in a rock unit called the Dresser Formation, west of Marble Bar. "They could be the oldest evidence for life on Earth," he said. "We have found micro-fossils and stromatolites of about the same age, but they are generally a little bit younger, so this could just push back evidence for life on Earth by a few more million years.

" A city of microbes communicating with each other He says it gives a new insight into what the microbes were doing. World's 10 Biggest Animals of all Time.