How Dinosaurs Were Named. How Do Dinosaurs Get Their Names? Believe it or not… Tammy the Triceratops, Tom the Tyrannosaurus and Stan the Stegosaurus all got their names the same way you did! 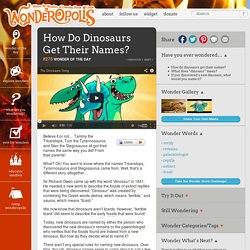 From their parents! What? Oh! You want to know where the names Triceratops, Tyrannosaurus and Stegosaurus came from. Well, that’s a different story altogether… Sir Richard Owen came up with the word “dinosaur” in 1841. We now know that dinosaurs aren’t lizards. Today, new dinosaurs are named by either the person who discovered the new dinosaur’s remains or the paleontologist who verifies that the fossils found are indeed from a new dinosaur. Palaeontology - KidsDinos.com - Dinosaurs For Kids. DINOSAUR 13: Found and Lost – Who Owns the T. rex, ‘Sue?’ Following Successful Festival Exhibition, DINOSAUR 13 Debuts as CNN Films Broadcast on Thursday, Dec. 11 at 9:00pm and 11:00pm ET When paleontologist Peter Larson and his team from South Dakota’s Black Hills Institute made one of the world’s greatest dinosaur discoveries in 1990, they knew it was the discovery of a lifetime — the largest, most complete Tyrannosaurus rex skeleton ever found. 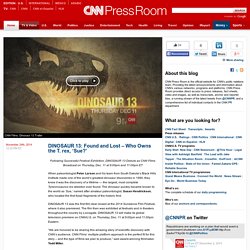 The dinosaur quickly became known to the world as ‘Sue,’ named after amateur paleontologist, Susan Hendrickson, who located the first fossil fragments of the historic find. DINOSAUR 13 was the first film deal closed at the 2014 Sundance Film Festival, where it also premiered. The film then was exhibited at festivals and in theaters throughout the country by Lionsgate. DINOSAUR 13 will make its global television premiere on CNN/U.S. on Thursday, Dec. 11 at 9:00pm and 11:00pm Eastern. “We are honored to be sharing this amazing story of scientific discovery with CNN’s audience. About CNN Films About CNN. Finding Spinosaurus: A Dinosaur Bigger Than T. Rex. A century ago, scientists unearthed fossils of a gigantic carnivorous dinosaur bigger than Tyrannosaurus rex in the Sahara desert, but until recently, paleontologists thought the fearsome beast was lost to history. 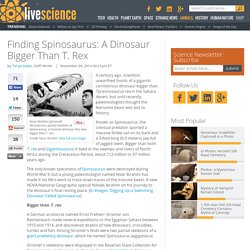 Known as Spinosaurus, the colossal predator sported a massive finlike sail on its back and a 3-foot-long (0.9 meters) jaw full of jagged teeth. Bigger than both T. rex and Gigantosaurus, it lived in the swamps and rivers of North Africa during the Cretaceous Period, about 112 million to 97 million years ago. The only known specimens of Spinosaurus were destroyed during World War II, but a young paleontologist named Nizar Ibrahim has made it his life's work to track down traces of the massive beast.

A new NOVA/National Geographic special follows Ibrahim on his journey to the dinosaur's final resting place. [In Images: Digging Up a Swimming Dinosaur Called Spinosaurus] How many fossils have been found? (Page 1) - Fossils - Ask a Biologist Q&A. What are fossils and how do they form. ABC - Science - Beasts - Fossil Fun. Dinosaur fossils found in Canada. The Alberta Story: Hunting Dinosaurs in Drumheller. 10 Facts About Fossils. Fossils are defined as the preserved remains of a past geological age. 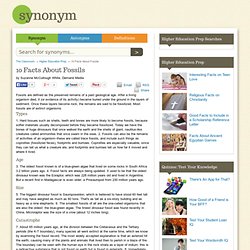 After a living organism died, it (or evidence of its activity) became buried under the ground in the layers of sediment. Once these layers become rock, the remains are said to be fossilized. Fossils. While minerals are the core of most of our collections – colors, crystal forms, rarity? 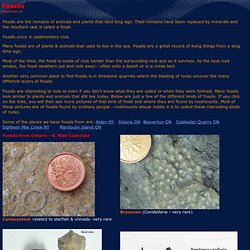 – fossils can be just as fascinating in form and rarity, though rarely colorful. For these reasons some of our members are devoted to fossils and their histories. Happily these parts of southern Ontario are rich in the preserved remains of (usually) extinct creatures. There is a vast literature on the searching; classification and history of fossils and readers are encouraged to seek these out at libraries and shops. Geological specialists called stratigraphers rely very heavily on fossils as they try to match (correlate) formations of rocks in one area with those in another, often hundreds of kilometres – or even continents – away.

The relative dating system, being all early geologists had, was first put to formal use in the superb work of William Smith’s map of 1815, finally published after years of observing rock layers (strata) as he built canals. Trilobites and Brachiopods Alberta Fossils. Fossils for kids. How are fossils formed? WHAT'S A FOSSIL? What Are Fossils - KidsDinos.com - Dinosaurs For Kids. What is a fossil? Not many plants and animals are lucky enough be turned into fossils. 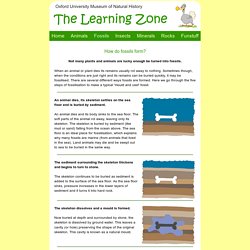 When an animal or plant dies its remains usually rot away to nothing. Sometimes though, when the conditions are just right and its remains can be buried quickly, it may be fossilised. Fun Fossil Facts for Kids - Fossils, Dinosaurs, Paleontology & Petrification. Fossil Games Online For Kids - Learn About Different Fossils. How are Fossils Formed? So how are fossils formed anyway? 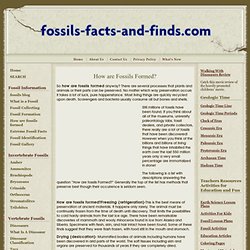 There are several processes that plants and animals or their parts can be preserved. No matter which way preservation occurs it takes a lot of luck, pure happenstance. Fossils Game - Interactive. Dinosaur Eggs. Dog stumbles upon 300 million-year-old fossil - Technology & Science. A family and their dog named Kitty have stumbled upon one of the most significant fossil finds ever in Nova Scotia. 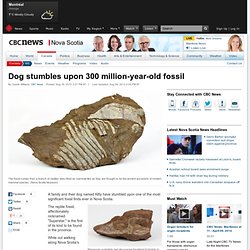 Previously, scientists had discovered fossilized footprints in Colchester County and a few scattered bones on P.E.I., but Superstar is the most complete specimen to date. (Nova Scotia Museum) The reptile fossil, affectionately nicknamed "Superstar," is the first of its kind to be found in the province. While out walking along Nova Scotia's fossil-rich Northumberland shore, Patrick Keating, his family, and their dog, Kitty, found a fossilized rib cage, backbone and partial sail. When they went back to the same area a week later, they found the creature's fossilized skull. Observe how fossils can form.

Page Museum at the La Brea Tar Pits. 4Excavation We carefully remove the dirt from around each fossil. 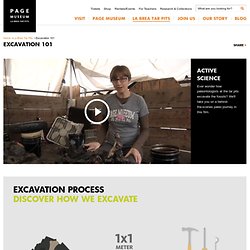 This dirt (or matrix) is then stored for later processing as it often contains other tiny fossils that can only be detected in the Lab. 5Measuring Fossils We measure the position and orientation of each fossil before removing it from the grid. This will help us understand how the deposit was formed. 6Recording data.