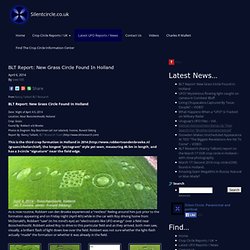 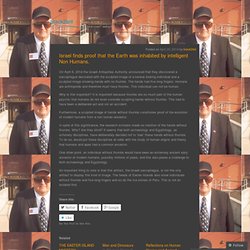 On April 9, 2014 the Israeli Antiquities Authority announced that they discovered a sarcophagus decorated with the sculpted image of a serene looking individual and a sculpted image showing hands with no thumbs. The hands had five long fingers. Humans are anthropoids and therefore must have thumbs. This individual can not be human. Bigstory.ap. JERUSALEM (AP) — Israeli archaeologists have unearthed a rare sarcophagus featuring a slender face and a scarab ring inscribed with the name of an Egyptian pharaoh, Israel's Antiquities Authority said Wednesday. 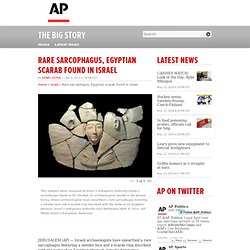 The mystery man whose skeleton was found inside the sarcophagus was most likely a local Canaanite official in the service of ancient Egypt, Israeli archaeologists believe, shining a light on a period when pharaohs governed the region. "This is a really beautiful face, very serene," said Edwin van den Brink, an Egyptologist and archaeologist with Israel's government antiquities authority.

"It's very appealing. " Van den Brink said archaeologists dug at Tel Shadud, an archaeological mound in the Jezreel Valley, from December until last month. The archaeologists first uncovered the foot of the sarcophagus and took about three weeks to work their way up the coffin. The lid of the clay sarcophagus is shattered, but the sculpted face remains nearly intact. Rare sarcophagus, Egyptian scarab found in Israel. 14 avril. News Republic.

15 avril. Official Chilean UFO Study. Collahuasi Case.pdf. 22 avril. Make Your Own Graphene With Just a Blender. Researchers unveiled the process for producing hundreds of liters of a solution containing graphene sheets -- it’s so simple, it can be replicated using household appliances (but to be quite honest, you probably shouldn’t actually try this at home). 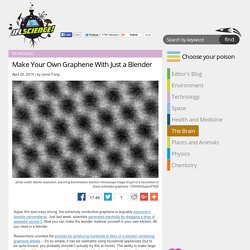 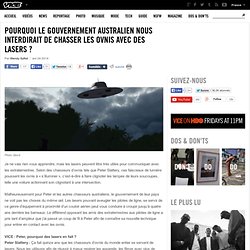 It is tremendously strong and is an exciting area of research for those seeking to integrate it into computer chips, though the structure of graphene lacks a bandgap, making it a poor conductor on its own. Though it can be modified to have a bandgap, it comes at the expense of the graphene’s integrity as a material. Pouring Saltwater Over Graphene Generates Electricity. Découvrez le Régalec, le plus grand poisson osseux au monde, fait une apparition sur une plage mexicaine ! DUENDE REAL! en Santa fe-Argentina 2014. Bioengineers Build Circuit Board Modeled On The Human Brain.

Stanford scientists have generated a hardware system based on the human brain that is capable of simulating, in real-time, a million neurons with billions of synaptic connections using only a similar amount of power to what is required to run a tablet computer. 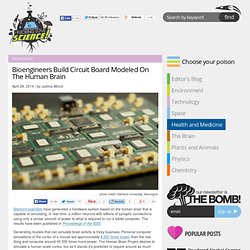 The results have been published in Proceedings of the IEEE. Generating models that can simulate brain activity is tricky business. Personal computer simulations of the cortex of a mouse are approximately 9,000 times slower than the real thing and consume around 40,000 times more power. The Human Brain Project desires to simulate a human-scale cortex, but as it stands it’s predicted to require around as much power as 250,000 households!

In this study scientists generated system that they are calling Neurogrid, which is comprised of 16 “Neurocore” chips integrated together on a circuit board. Unfortunately a drawback at the moment is the high costs involved in development; each Neurogrid costs around $40,000. ENERGIE LIBRE : l'effet Dumas, une révolution ? Russia’s Petro-Ruble Challenges US Dollar Hegemony. China Seeks Development of Eurasian Trade. Russia has just dropped another bombshell, announcing not only the de-coupling of its trade from the dollar, but also that its hydrocarbon trade will in the future be carried out in rubles and local currencies of its trading partners – no longer in dollars – see Voice of Russia Russia’s trade in hydrocarbons amounts to about a trillion dollars per year. 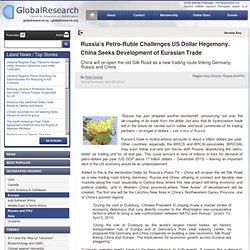 Other countries, especially the BRICS and BRCIS-associates (BRICSA) may soon follow suit and join forces with Russia, abandoning the ‘petro-dollar’ as trading unit for oil and gas. This could amount to tens of trillions in loss for demand of petro-dollars per year (US GDP about 17 trillion dollars – December 2013) – leaving an important dent in the US economy would be an understatement. Russia and China announce decoupling trade from Dollar – The End for the USA is nigh‏ Resonateur-2014-04-07.