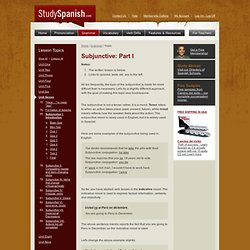 Usted va al Perú en diciembre. The above sentence merely reports the fact that you are going to Peru in December, so the indicative mood is used. Let's change the above example slightly: No dudo que usted va al Perú en diciembre. Let's make another slight change to our example: Imperfect Subjunctive. Search results 1 - 40 of about 300 for subjunctive. (0.056003192 seconds) Index of lessons on the Spanish Subjunctive Mood The Spanish Present Subjunctive Mood is used to express a wish or a request or a condition that does not exist. 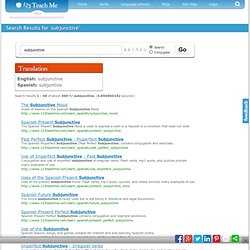 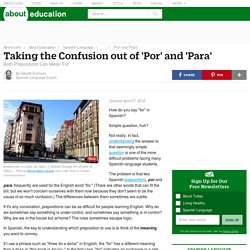 How do you say "for" in Spanish? Simple question, huh? Not really. In fact, understanding the answer to that seemingly simple question is one of the more difficult problems facing many Spanish-language students. The problem is that two Spanish prepositions, por and para, frequently are used for the English word "for. " If it's any consolation, prepositions can be as difficult for people learning English. Spanish Idioms of the Form 'Tener' + Noun. 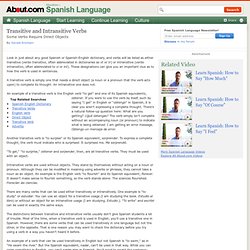 These designations can give you an important clue as to how the verb is used in sentences. A transitive verb is simply one that needs a direct object (a noun or a pronoun that the verb acts upon) to complete its thought. An intransitive one does not. An example of a transitive verb is the English verb "to get" and one of its Spanish equivalents, obtener.

If you were to use the verb by itself, such by saying "I get" in English or "obtengo" in Spanish, it is clear you aren't expressing a complete thought. The Conditional Tense. Home / Grammar / Topic Notes: The written lesson is below.Links to quizzes, tests, etc. are to the left. 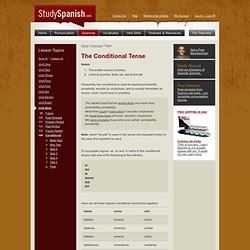 Frequently, the conditional is used to express probability, possibility, wonder or conjecture, and is usually translated as would, could, must have or probably. The student said that he would study one more hour. (probability, possibility) What time could it have been? The Present Perfect Tense. Home / Grammar / Topic Notes: The written lesson is below.Links to quizzes, tests, etc. are to the left. 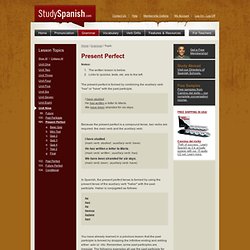 The present perfect is formed by combining the auxiliary verb "has" or "have" with the past participle. I have studied.He has written a letter to María. We have been stranded for six days. The Future Tense. Home / Grammar / Topic Notes: The written lesson is below.Links to quizzes, tests, etc. are to the left. 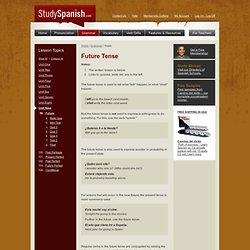 The future tense is used to tell what "will" happen, or what "shall" happen. I will go to the beach next month. I shall write the letter next week. ¡Qué! Spanish Exclamations. What does como mean in spanish? What is llana, esdrújula, diptongo and aguda? Llana (also known as grave) is a word where the emphasis is placed on the penultimate syllable. 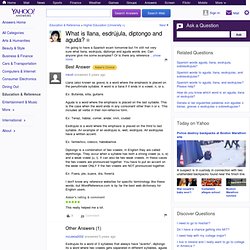 A word is a llana if it ends in a vowel, n, or s. Ex: Bufanda, silla, guitarra Aguda is a word where the emphasis is placed on the last syllable. This is the case when the word ends in any consonant other than n or s. This includes all verbs in their non-reflexive form. Demonstrative Adjectives. Overview As the name implies, demonstrative adjectives demonstrate a quality about the noun they modify, in this case, the location in respect to the speaker or the listener. 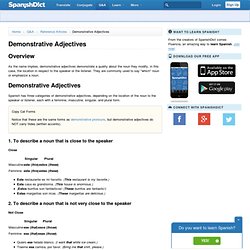