Social anarchism. Libertarian socialists believe in converting present-day private property into the commons or public goods, while retaining respect for personal property.[4] Social anarchism is used to specifically describe tendencies within anarchism that have an emphasis on the communitarian and cooperative aspects of anarchist theory and practice. 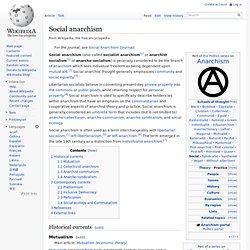 Social anarchism is generally considered an umbrella term that includes (but is not limited to) anarcho-collectivism, anarcho-communism, anarcho-syndicalism, and social ecology. Social anarchism is often used as a term interchangeably with libertarian socialism,[1] left-libertarianism,[5] or left-anarchism.[6] The term emerged in the late 19th century as a distinction from individualist anarchism.[7] Historical currents[edit] Pierre-Joseph Proudhon. Proudhon, who was born in Besançon, was a printer who taught himself Latin in order to better print books in the language. 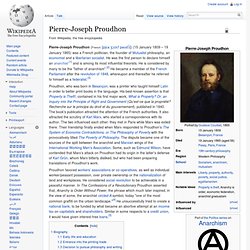 His best-known assertion is that Property is Theft! Kevin Carson. Carson describes his politics as on "the outer fringes of both free market libertarianism and socialism. 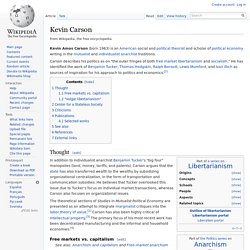 " He has identified the work of Benjamin Tucker, Thomas Hodgskin, Ralph Borsodi, Lewis Mumford, and Ivan Illich as sources of inspiration for his approach to politics and economics.[1] Thought[edit] Studies in Mutualist Political Economy. The book is divided in three parts. 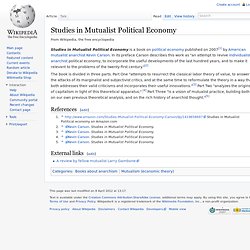 Part One "attempts to resurrect the classical labor theory of value, to answer the attacks of its marginalist and subjectivist critics, and at the same time to reformulate the theory in a way that both addresses their valid criticisms and incorporates their useful innovations. Mutualism (economic theory) Mutualism is an economic theory and anarchist school of thought that advocates a society where each person might possess a means of production, either individually or collectively, with trade representing equivalent amounts of labor in the free market.[1] Integral to the scheme was the establishment of a mutual-credit bank that would lend to producers at a minimal interest rate, just high enough to cover administration.[2] Mutualism is based on a labor theory of value that holds that when labor or its product is sold, in exchange, it ought to receive goods or services embodying "the amount of labor necessary to produce an article of exactly similar and equal utility".[3] Mutualism originated from the writings of philosopher Pierre-Joseph Proudhon. 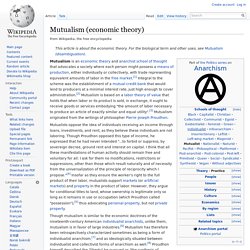 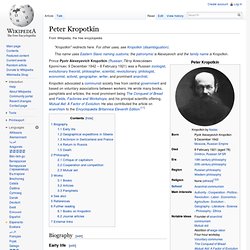 Kropotkin advocated a communist society free from central government and based on voluntary associations between workers. He wrote many books, pamphlets and articles, the most prominent being The Conquest of Bread and Fields, Factories and Workshops, and his principal scientific offering, Mutual Aid: A Factor of Evolution. He also contributed the article on anarchism to the Encyclopædia Britannica Eleventh Edition.[11] Biography[edit] Early life[edit] Kropotkin was born in Moscow, into the second-highest level of the Russian aristocracy. 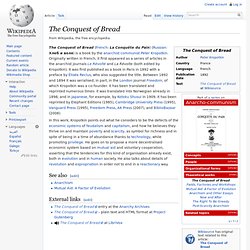 Originally written in French, it first appeared as a series of articles in the anarchist journals Le Révolté and La Révolte (both edited by Kropotkin). It was first published as a book in Paris in 1892 with a preface by Élisée Reclus, who also suggested the title. Between 1892 and 1894 it was serialised, in part, in the London journal Freedom, of which Kropotkin was a co-founder. It has been translated and reprinted numerous times: it was translated into Norwegian already in 1898, and in Japanese, for example, by Kotoku Shusui in 1909. 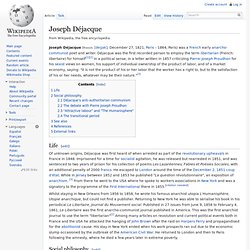 Déjacque was the first recorded person to employ the term libertarian (French: libertaire) for himself[1][2] in a political sense, in a letter written in 1857 criticizing Pierre-Joseph Proudhon for his sexist views on women, his support of individual ownership of the product of labor, and of a market economy, saying: "it is not the product of his or her labor that the worker has a right to, but to the satisfaction of his or her needs, whatever may be their nature.

Anarchist communism. Some forms of anarchist communism such as insurrectionary anarchism are strongly influenced by egoism and radical individualism, believing anarcho-communism is the best social system for the realization of individual freedom.[13][14][15][16] Some anarcho-communists view anarcho-communism as a way of reconciling the opposition between the individual and society.[17][18][19][20][21] Anarcho-communism developed out of radical socialist currents after the French Revolution[22][23] but was first formulated as such in the Italian section of the First International.[24] The theoretical work of Peter Kropotkin took importance later as it expanded and developed pro-organizationalist and insurrectionary anti-organizationalist sections.[25] History[edit] Early developments[edit] Anarchist communist currents appeared during the English Civil War and the French Revolution of the 17th and 18th centuries, respectively. 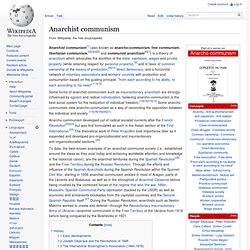 Mutual Aid: A Factor of Evolution by kniaz Petr Alekseevich Kropotkin. Mikhail Bakunin. Collectivist anarchism. For the collectivization of the means of production, it was originally envisaged that workers will revolt and forcibly collectivize the means of production.[1] Once collectivization takes place, money would be abolished to be replaced with labour notes and workers' salaries would be determined, in democratic organizations of voluntary membership, based on job difficulty and the amount of time they contributed to production. 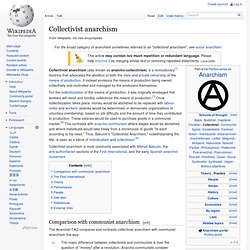 These salaries would be used to purchase goods in a communal market.[2] This contrasts with anarcho-communism where wages would be abolished, and where individuals would take freely from a storehouse of goods "to each according to his need. " Rudolf Rocker. Johann Rudolf Rocker (March 25, 1873 – September 19, 1958) was an anarcho-syndicalist writer and activist. A self-professed anarchist without adjectives, Rocker believed that anarchist schools of thought represented "only different methods of economy" and that the first objective for anarchists was "to secure the personal and social freedom of men". Mainz Early life. Noam Chomsky. Avram Noam Chomsky (/ˈnoʊm ˈtʃɒmski/; born December 7, 1928) is an American linguist, philosopher,[21][22] cognitive scientist, logician,[23][24][25] political commentator and anarcho-syndicalist activist. Sometimes described as the "father of modern linguistics",[26][27] Chomsky is also a major figure in analytic philosophy.[21] He has spent most of his career at the Massachusetts Institute of Technology (MIT), where he is currently Professor Emeritus, and has authored over 100 books.

He has been described as a prominent cultural figure, and was voted the "world's top public intellectual" in a 2005 poll.[28] Anarcho-syndicalism. Anarcho-syndicalism (also referred to as revolutionary syndicalism[1]) is a theory of anarchism which views revolutionary industrial unionism or syndicalism as a method for workers in capitalist society to gain control of an economy and, with that control, influence broader society. Syndicalists consider their economic theories a strategy for facilitating worker self-activity and as an alternative co-operative economic system with democratic values and production centered on meeting human needs.

The basic principles of anarcho-syndicalism are solidarity, direct action (action undertaken without the intervention of third parties such as politicians, bureaucrats and arbitrators) and direct democracy, or workers' self-management. The end goal of anarcho-syndicalism is to abolish the wage system, regarding it as wage slavery. Anarcho-syndicalist theory therefore generally focuses on the labor movement.[2] History Origins Revolutionary Syndicalism and the International Workers Association Film. Post-Scarcity Anarchism. Platformism. Platformism is a tendency (or organized school of thought) within the anarchist movement. It stresses the need for tightly organized anarchist organizations, that are able to influence working class and peasant movements.

"Platformist" groups reject the model of Leninist vanguardism. They aim, instead, to "make anarchist ideas the leading ideas within the class struggle".[1] The four main principles by which an anarchist organisation should operate, according to Platformists, are ideological unity, tactical unity, collective responsibility, and federalism. In general, platformist groups aim to win the widest possible influence for anarchist ideas and methods in the working class and peasantry—like especifismo groups, platformists orientate towards "ordinary" people, rather than to the extreme left milieu.

Participism. Participism is a libertarian socialist political philosophy consisting of two independently created economic and political systems: participatory economics or "parecon" and participatory politics or "parpolity". Murray Bookchin. Bookchin, Towards a Liberatory Technology. This work appears in Anarchy Archives with the permission of the author. Bookchin on Technology. Communalism (political philosophy) Communalism (spelled with a capital C to differentiate it from other forms) is a libertarian socialist political philosophy coined by author and activist Murray Bookchin as a political system to complement his environmental philosophy of social ecology. Social ecology. The Ecology of Freedom: The Emergence and Dissolution of Hierarchy: Murray Bookchin: 9781904859260: Amazon.com. Study/Action Group meeting ervy other week in Whitechapel. The Institute for Social Ecology. About This Blog. Natural Economics Natural economics is the study of post-scarcity economics.

Though commonly defined as an economy where all goods are free and abundant, natural economics specifies a slightly different definition. Post-scarcity - AdCiv. In a sentence: by increasing the amount and quality of physical goods (through automation) via freely available open-source channels, until it makes no sense for anyone to rely on anything else. The transition beyond our current institutions to post-scarcity, due to social and political reasons, may though be harder than actually developing the technologies required to support a technological post-scarcity. However some form of true post-scarcity - perhaps regulated at the personal consumption level unless agreed at a community/regional level for larger projects - where all people on Earth do not have to work for pay, or any kind of exchange, and have a very high standard of living does appear possible on the face of it.

Post-Scarcity Does Not Mean Post-Work. By Daniel Altman Does the rise of the robots doom us all to unemployment? The answer is most certainly no. The Long Tail - Wired Blogs. The economics of abundance.