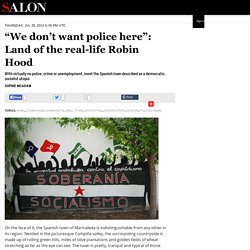 Nestled in the picturesque Campiña valley, the surrounding countryside is made up of rolling green hills, miles of olive plantations and golden fields of wheat stretching as far as the eye can see. The town is pretty, tranquil and typical of those found in Andalusia, Spain’s poorest and most southerly province. It’s also a democratic, anti-capitalist village whose mayor actively encourages shoplifting. Since the financial crisis began in 2008, Marinaleda has shot to fame — and so has its maverick mayor Juan Manuel Sánchez Gordillo, who earned the nickname,”The Spanish Robin Hood,” after organizing and carrying out a series of supermarket raids in a direct action protest last August.

Basic groceries such as oil, rice and beans were loaded into carts, wheeled from the store and taken to a local food bank to help the poor, as helpless cashiers looked on, some crying. Exarchia, The Town In Athens Greece That Is Keeping The Government Out And St... As the economic and political systems continue to crumble and collapse in Greece, a district in Athens is growing in strength and independence after large numbers of individuals began to keep the government out and empower their own community. 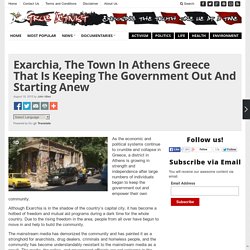 Although Exarchia is in the shadow of the country’s capital city, it has become a hotbed of freedom and mutual aid programs during a dark time for the whole country. The Story of Your Enslavement. Imagine - John Lennon - Stanley Colors. I finally colored this comic You can buy a print in the form below. 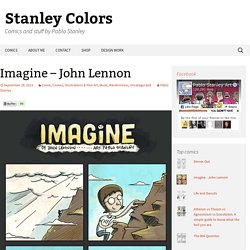 Disclaimer: This is NOT an anti-religion/atheist-propaganda comic. The comic and the song (at least as I understand it) tries to communicate that no matter your faith, we should all share the world in peace… As silly as that sounds.Yes, MLK, Gandhi and Marley were spiritual people. Read point one This is NOT an antisemitic comic. The Anarchist Ideal Summed Up Beautifully in 7 Minutes. The Revolution Has Been Digitized: Explore the Oldest Archive of Radical Posters. The oldest public collection of radical history completed a digital archive of over 2,000 posters. 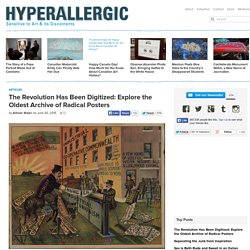 The Joseph A. Labadie Collection at the University of Michigan Library announced this month that its posters on anarchism, civil liberties, feminism, labor, and other political movements are online for the first time. “It’s not enough for us to preserve the artifact if people cannot see it,” Julie Herrada, Labadie Collection curator, told Hyperallergic.

“Posters are a difficult format because they are fragile and can only withstand so much physical handling, so providing access to these materials while keeping them safe is a complicated process, or it was, until the technology and resources became more readily available to us.” Joseph Labadie (1890) (via Wikimedia) (click to enlarge) While all of the posters were scanned at high resolution, they appear online as thumbnails with navigation to zoom. “A Garland for May Day 1895″ (1895), Walter Crane, original relief print “Vote for William D. Anti-State Anti-Capitalist Distro. Anarchi. Refuge26-2-Why-No-Borders.pdf. To Change Everything. The Psychology of Authority. Usurper & tyrant.

To Change Everything, an anarchist appeal / CrimethInc. Ex-Workers' Collective. Governments promise rights, but they can only take liberties. 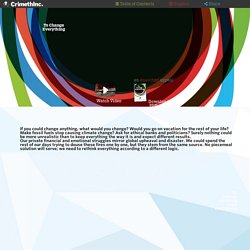 The idea of rights implies a central power to grant and guard them. Yet anything the state is powerful enough to guarantee, it is powerful enough to take away; empowering government to solve one problem only opens the door for it to create more problems. And governments do not generate power out of thin air—that’s our power that they wield, which we can employ far more effectively without the Rube Goldberg machine of representation.

The most liberal democracy shares the same principle as the most despotic autocracy: the centralization of power and legitimacy in a structure intended to monopolize the use of force. Whether the bureaucrats who operate this structure answer to a king, a president, or an electorate is beside the point. Dictatorships are inherently unstable: you can slaughter, imprison, and brainwash entire generations and their children will invent the struggle for freedom anew.