Music has the ability to evoke powerful emotional responses — both chills and thrills — in listeners. And this capacity is universal.

Music students have higher academic exam scores than their non-musical peers. 5 Cognitive Benefits of Music Training. Source: PublicDomainArchive/Pixabay For many, music study is intrinsically rewarding, and music learning is an end in itself. 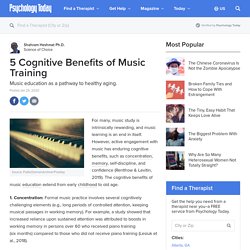 However, active engagement with music has enduring cognitive benefits, such as concentration, memory, self-discipline, and confidence (Rentfrow & Levitin, 2019). The cognitive benefits of music education extend from early childhood to old age. article continues after advertisement 1. 2. Evidence shows that musical training is a powerful intervention that could help children mature emotionally and intellectually. 3. 4. 5. The brain is like a block of clay that can be molded to its environment. 6 Common Factors Influencing Your Music Preferences. Music, Emotion, and Well-Being. Source: [[File:Louis Armstrong restored (color version).jpg|thumb|Louis Armstrong restored (color version)]] One of the most important issues in the psychology of music is how music affects emotional experience (Juslin, 2019). 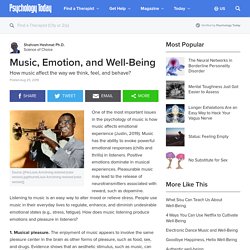 Music has the ability to evoke powerful emotional responses (chills and thrills) in listeners. Positive emotions dominate in musical experiences. Pleasurable music may lead to the release of neurotransmitters associated with reward, such as dopamine. Listening to music is an easy way to alter mood or relieve stress. Article continues after advertisement 1. 2. 3. 4. 5. Music Evokes Over a Dozen Distinct (But Universal) Emotions. Music is a universal language that evokes at least 13 key emotions across different cultures, according to a new study (Cowen et al., 2020) by researchers at the University of California, Berkeley. 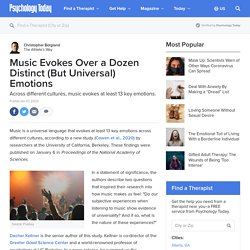 These findings were published on January 6 in Proceedings of the National Academy of Sciences. Music Participation Is Linked to Teens' Academic Achievement. Students who participate in music-related activities between grades 7-12 achieve significantly higher scores on science, math, and English exams in high school than non-musical classmates, according to a new large-scale study. 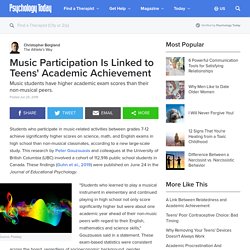 This research by Peter Gouzouasis and colleagues at the University of British Columbia (UBC) involved a cohort of 112,916 public school students in Canada. These findings (Guhn et al., 2019) were published on June 24 in the Journal of Educational Psychology. article continues after advertisement Source: Pixabay "Students who learned to play a musical instrument in elementary and continued playing in high school not only score significantly higher but were about one academic year ahead of their non-music peers with regard to their English, mathematics and science skills," Gouzouasis said in a statement. Why Are We Moved by Music? "Music is the shorthand of emotion. 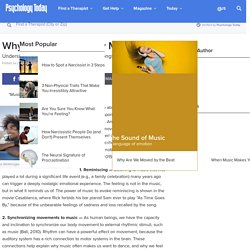 " —Leo Tolstoy Source: MintImages/Shutterstock Music has the ability to evoke powerful emotional responses — both chills and thrills — in listeners. 6 Ways Music Affects Your Emotions. People express different emotions when they listen to music, for example by smiling, laughing, or crying. 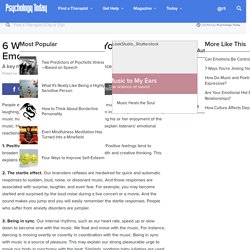 6 Reasons Why We Enjoy Listening to Sad Music. Sadness is a primary emotion that is expressed and perceived equally across cultures. 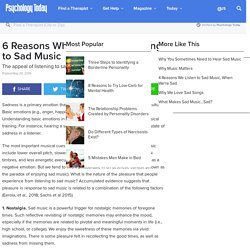 Basic emotions (e.g., anger, happiness, and sadness) are innate and universal. Understanding basic emotions in music is very quick and does not require musical training. For instance, hearing a sad cello performance may induce a genuine state of sadness in a listener. 10 Magical Effects Music Has On the Mind. Effects of music include improving verbal IQ, aiding in heart disease treatment, evoking colours in the mind and even helping you see happy faces all around. 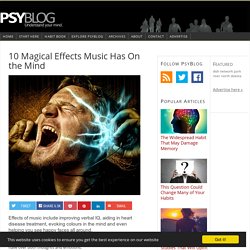 Every fan knows the tremendous effects of music and the power it can have over both thoughts and emotions. Great music can transform an ordinary day into something magical, even spiritual. It can provide solace, release, strong sensations and more. But the effects of music spread further still: right up from our genetic code, through our thoughts and bodies and out into how we relate in groups. 1.

Practising the piano won’t just improve your musical abilities, it can also improve your visual and verbal skills. A study of 8 to 11-year-olds found that, those who had extra-curricular music classes, developed higher verbal IQ, and visual abilities, in comparison to those with no musical training (Forgeard et al., 2008). This shows the benefits of learning an instrument are not purely musical, but extend into cognition and visual perception.

Classical Music's Surprising Effect on Genes Vital to Memory and Learning. How 20 minutes of Mozart affects the expression of genes vital to learning, memory and more… Listening to classical music enhances the activity of genes involved in learning and memory, a new study finds. 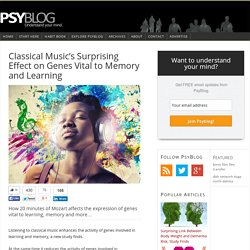 At the same time it reduces the activity of genes involved in neurodegeneration. It is the first study to show how music affects the transcription of genes across the whole genome. Transcription is the first step in how genes are expressed — in other words, how our genetic code is turned into proteins. The study helps to explain the widespread effects of music on the brain. Music has considerable power to enhance memory, cognitive performance and development, not to mention the emotions. For the study, 48 participants listened to Mozart’s Violin Concerto No. 3 in G major, K.216: Blood samples were taken just before they listened to it and just after.

To provide a comparison group, some of the same people also had blood samples taken before and after a non-musical activity on another occasion. At a glance, it may seem like the world’s biggest technology companies have a lot in common. 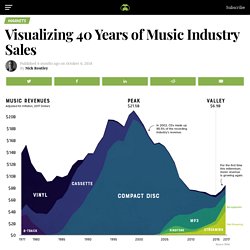 For starters, all five of the Big Tech companies (Amazon, Apple, Facebook, Microsoft, and Alphabet) have emerged as some of the most valuable publicly-traded companies in the world, with founders such as Jeff Bezos or Bill Gates sitting atop the global billionaire list. These tech giants also have a consumer-facing aspect to their business that is front and center. With billions of people using their platforms globally, these companies leverage user data to tighten their grip even more on market share. At the same time, this data is a double-edged sword, as these same companies often find themselves in the crosshairs for mishandling personal information.

Finally, all of these companies have a similar origin story: they were founded or incubated on the fertile digital grounds of the West Coast. Sizing Up the Tech Giants How Big Tech Makes Money You are the Customer You are the Product. Aesthetic. Emotions. Body Energy. Music Therapy. Novelty. Motivation for Exercise. Instruction. Every Noise at Once.