Tips for Being an Awesome Production Coordinator. Thriving under pressure, being able to multi-task, and playing well with others are just a few of the necessary skills that you need to succeed as a production coordinator. 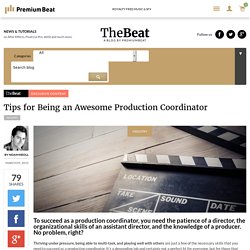 It’s a demanding job and certainly not a perfect fit for everyone, but for those that work well in this type of environment and are heavily self-motivated, working as a production coordinator can be an excellent career move. It’s the natural progression away from PAing and into ADing, and eventually producing. If you’re considering a career move and think you’re up for the challenge (or already work in this demanding position), these tips will make your life easier both on set and off. 1. Communicate Impeccably and Lead Your Team Image from Shutterstock Communication and the ability to take charge and lead are two of the most critical qualities for you to have as a PC.

Having likely come from a PA background, you may be accustomed to feeling like you should simply do your job, stay quiet, and get out of the way. 4 Tips for Being an Awesome Assistant Director. Top image from DIY Film Working as an AD is one of the most stressful jobs on set, but can also be one of the most rewarding. 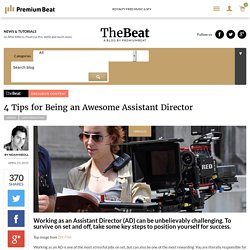 You are literally responsible for tackling more at any given time than any other crew member, and need to juggle logistical, creative, and technical aspects of your project without blinking an eye. Many aspiring producers attempt to jump into the role of an AD before they are truly ready, which ultimately can negatively impact their productions and lead them to possibly even lose their jobs. So if you are starting to work as an AD or even thinking about it —read on. These tips will keep you from falling on your face during the filmmaking process and will dramatically increase your chances of success. 1. Image from Sarah K. Making the Deal: What you need to know before you make a deal. The first question you have to ask yourself is what do you want out of your film. 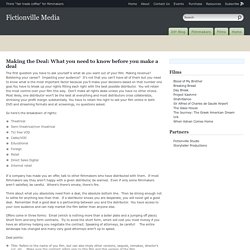 Making revenue? Bolstering your career? Impacting your audience? It’s not that you can’t have all of them but you need to know what is the most important factor because you’ll make your decisions based on that number one goal.You have to break up your rights fitting each right with the best possible distributor. You will retain the most control over your film this way. So here’s the breakdown of rights: TheatricalSemi theatrical/non theatricalTV/ free VODCable/VODEducationalForeignRetailDirect Sales DigitalInternet retail If a company has made you an offer, talk to other filmmakers who have distributed with them.

Think about what you absolutely need from a deal, the absolute bottom line. Offers come in three forms: Email (which is nothing more than a boiler plate and a jumping off place) Short form and long form contracts. Deal points: There are three types of deals: The Top 3 Markets for Distributing Your Film (Guest Blog) In my last blog, I laid out the strategy of approaching distribution today with what I refer to as “Film Distribution 3.0.” 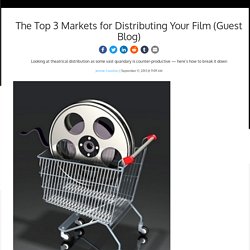 Now let’s look at the first three major markets you have for exploiting your film: theatrical, home video (Blu-ray/DVD) and VOD. Looking at theatrical distribution as some vast quandary is counter-productive. If you don’t secure some major deal that’s going to put you onto 3,000 screens, this doesn’t mean you should bypass this market. Therefore, I break Theatrical down into three “sub-categories” that should be looked at, if this is a market you’d like to exploit. 1. But here’s a little known “secret” about the theatrical market: There are countless films every year that do not get a major deal at a major festival, but find their way into limited releases. Why? 2. The major difference here is that you the producer are putting up the “P&A” (prints & advertising) money for the release — not the distributor. 3.

HOME VIDEO (Blu-ray/DVD) Every Filmmaking Form You'll Ever Need in 99 Free Templates. Ease your workload (and your mind) with these free templates for everything from storyboarding to contracts to accounting. 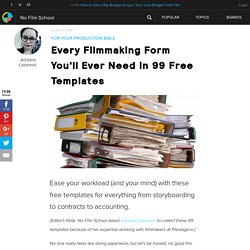 [Editor's Note: No Film School asked Adrijana Lazarevic to collect these 99 templates because of her expertise working with filmmakers at Filestage.io.] No one really feels like doing paperwork, but let’s be honest: no good film comes without organization and planning. That’s where templates can help you out. I work at a startup that creates software for filmmakers, and we see how busy you are every day, so we collected the most helpful templates, guides and checklists out there to make your life a little easier. They really help save time for what matters most: letting your creativity flow and producing breathtaking movies that won’t be forgotten. Script Prep/Pre-production Much of your planning happens well before production, including trying to get investors on board and starting to determine who your audience will be. 1. Storyboard/Mood Board Templates 7. 12. 17.