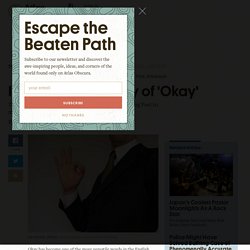 (Photo: Johnny Magnusson/Public Domain) The Hypnotic Clamor of Morocco by Adam Shatz. In 1931, a twenty-one-year-old American composer in Paris named Paul Bowles visited Morocco at the suggestion of Gertrude Stein. 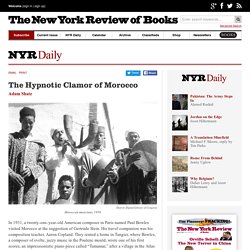 His travel companion was his composition teacher, Aaron Copland. They rented a home in Tangier, where Bowles, a composer of svelte, jazzy music in the Poulenc mould, wrote one of his first scores, an impressionistic piano piece called “Tamamar,” after a village in the Atlas mountains. Copland was unsettled by the clamor of drums during wedding season, and thought Tangier a “madhouse,” but Bowles was enraptured. He collected 78s of local music, just as he had collected old blues recordings back home, and sent copies to Béla Bartók. Here’s the Real Story Behind the Indonesian Singer Irma Bule, Who Died From a Cobra Bite. The bizarre death of a singer in Indonesia became international headlines in recent days. 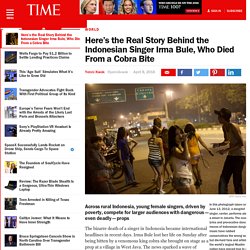 Irma Bule lost her life on Sunday after being bitten by a venomous king cobra she brought on stage as a prop at a village in West Java. The news sparked a wave of sensationalist headlines: “Shocking! Singer Irma Bule dies after being bit by venomous cobra on stage! (Watch video)” read one. “Tragic singer bitten by cobra on stage keeps singing for 45 MINUTES before collapsing and dying” read another. However, few stories looked beyond the lurid confluence of pop music, poison and a young woman’s death to understand why Irma was on stage with such a dangerous animal in the first place. Irma, 26, was not a nationally famous singer. Dangdut is a popular music genre in Indonesia, and often used to attract crowds, especially during election campaigns.

They are usually paid a pittance. The young singers have to find a way to entice bigger audiences in the highly competitive market. 'Crisis on Infinite Earths' 30 Years On. The Arkham Sessions — DR DREA. Click to read summary In their coverage of the third and final film in the Nolan trilogy, The Dark Knight Rises, Drea and Brian connect the events surrounding Bane's violent coup to the insurrection at the U.S. 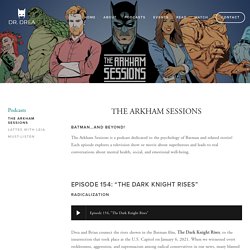 Capitol that took place on January 6, 2021. With a focus on explaining the fundamental causes of real-world terrorism, Drea outlines the psychological mechanisms involved in political radicalization and extremism, and clarifies widely held myths about the role of mental illness as a factor. As we observe displays of overt recklessness, aggression, and supremacism among radical conservatives in our news, we tend to blame individual factors such as mental illness. However, there's little field evidence that points to a relationship or predictive connection between mental disorders and terrorism. Bane, in particular, generalized his childhood abuse and isolation, directing his blame and anger toward mainstream agents of power. How Marvel Zombies Gave us the Purest Version of Spider-Man. 'Hot' Couture: All Of Human Torch's Costumes Over the Years. With the Fantastic Four's ongoing series finally returned at Marvel, it is clear that we will eventually see some sort of costume change for the group. 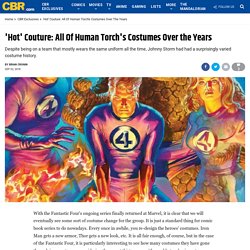 It is just a standard thing for comic book series to do nowadays. Every once in awhile, you re-design the heroes' costumes. Iron Man gets a new armor, Thor gets a new look, etc. 'They were forgotten': the great female cartoonists who have been overlooked. The world of comic books, both on the page and off, is one that’s typically dominated by men. 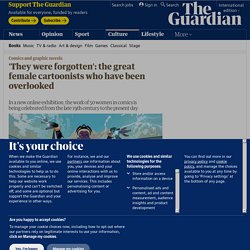 It’s an unavoidable gender skew yet what gets pushed to the forefront often hides a wealth of overlooked female talent. Women in Comics: Looking Forward and Back is a group exhibition at the Society of Illustrators featuring more than 50 female cartoonists, from the early 20th century trailblazers to plus-size superheroes, queer graphic novels, wartime romances and flapper-era cartoons, all of which go outside your typical superhero format. Songs About the Southland: Marvel's Black Panther vs. the Klan.

“Ain’t no change in the weather. 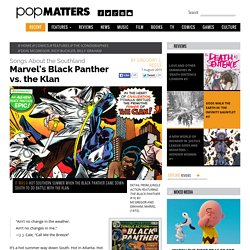 Ain’t no changes in me.” —J. J. The Social Justice League. The New Mutants: Superheroes and the Radical Imagination of American ComicsRamzi FawazNew York University Press It’s an old saw that superhero comics spike in popularity during times of national crisis. 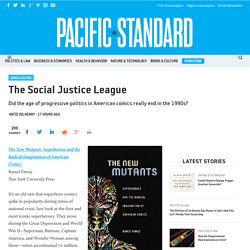 Just look at the first and most iconic superheroes: They arose during the Great Depression and World War II—Superman, Batman, Captain America, and Wonder Woman among them—when an estimated 70 million people read comic books. Yet equally interesting are the superhero stories we get when the country is not fighting foreign powers—stories that turn their national focus inward and champion the oppressed and forgotten American populations that most need a hero. This progressive strain in post-war comics is the subject of the New Mutants: Superheroes and the Radical Imagination of American Comics, which documents the period that gave rise to social purpose in American comics: the end of World War II to the mid-1990s.

The Forever-Doomed Eastern Europe of Our Imaginations. Comic book films that can’t manage find convincing motivations for their protagonists can often be rescued by matching the heroes against a compelling villain—Loki alone has saved at least two Marvel movies now. 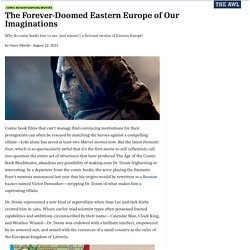 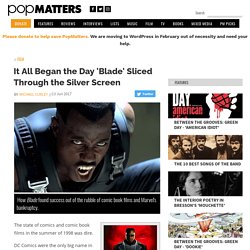 'Blade II' Pioneers the Marvel Sequel Yet Remains Hopelessly Outdated. Blade II Director: Guillermo del ToroCast: Wesley Snipes, Kris Kristofferson, Ron PerlmanStudio: New Line CinemaUS Release date: 2002-03-22 After Fox’s hit with X-Men in the summer, only one more superhero film came out in the year 2000. The rare original superhero film, M. Night Shyamalan’s Unbreakable was a modest hit at the time. However, as a contrast and commentary on fantastical superhero films, it might have fared even better years later when comic book films had taken over Hollywood. Marvel’s Jessica Jones and Gamergate: How the Netflix series absorbed the anxieties of the online movement. Photo by Myles Aronowitz/Netflix Marvel’s Netflix series Jessica Jones is many things. We Don’t Need Supergirl OR Jessica Jones. We Need Both.