About companies (and society)

Are We Out of Big Ideas? — Bad Words. How to Love: Legendary Zen Buddhist Teacher Thich Nhat Hanh on Mastering the Art of “Interbeing” By Maria Popova “To love without knowing how to love wounds the person we love.” 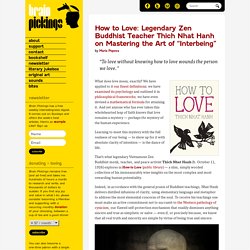 What does love mean, exactly? We have applied to it our finest definitions; we have examined its psychology and outlined it in philosophical frameworks; we have even devised a mathematical formula for attaining it. And yet anyone who has ever taken this wholehearted leap of faith knows that love remains a mystery — perhaps the mystery of the human experience. Learning to meet this mystery with the full realness of our being — to show up for it with absolute clarity of intention — is the dance of life. That’s what legendary Vietnamese Zen Buddhist monk, teacher, and peace activist Thich Nhat Hanh (b. Indeed, in accordance with the general praxis of Buddhist teachings, Nhat Hanh delivers distilled infusions of clarity, using elementary language and metaphor to address the most elemental concerns of the soul. If you pour a handful of salt into a cup of water, the water becomes undrinkable. Donating = Loving. Is Gender REAL? – 8-Bit Philosophy. "Person of Interest" Relevance (TV Episode 2013.

People CAN be different/MAKE a difference

Psyche. Screw stigma. I’m coming out. Admitting that I was not well—and was getting treatment—transformed my life, which I realize now, looking back, was headed down a very lonely and scary path. 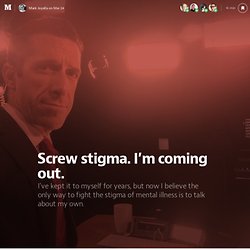 I kept waiting and waiting for my real life to begin, without making any progress to getting the things that I wanted. Sitting in a psychiatrist’s office one day in 2008, a wonderful but steely tough doctor gave it to me straight. “Do you want to get married? Have kids?” I said yes on both counts, even though I was living alone, without real furniture or a bed, in a home that I never allowed anyone to visit. I had left a promising relationship in another state with a woman who got close enough to me to see how screwed up I really was—and somehow, was okay with me, only to propel myself into an ultimatum: we move forward, or we end it. “Do you want to be the oldest Dad in preschool”, the doctor asked. The doc made the OCD diagnosis and prescribed a medication to help treat it. And I got better. And I’m not the only one. The Unaddressed Business of Filling Our Souls: Mood Science and the Evolutionary Origins of Depression. By Maria Popova What language and symbolism have to do with mood and how light exposure and sleep shape our mental health. 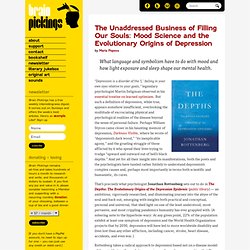 “Depression is a disorder of the ‘I,’ failing in your own eyes relative to your goals,” legendary psychologist Martin Seligman observed in his essential treatise on learned optimism. But such a definition of depression, while true, appears somehow insufficient, overlooking the multitude of excruciating physical and psychological realities of the disease beyond the sense of personal failure. Perhaps William Styron came closer in his haunting memoir of depression, Darkness Visible, where he wrote of “depression’s dark wood,” “its inexplicable agony,” and the grueling struggle of those afflicted by it who spend their lives trying to trudge “upward and outward out of hell’s black depths.”

The Likely Cause of Addiction Has Been Discovered, and It Is Not What You Think  It is now one hundred years since drugs were first banned — and all through this long century of waging war on drugs, we have been told a story about addiction by our teachers and by our governments.

This story is so deeply ingrained in our minds that we take it for granted. It seems obvious. It seems manifestly true. Until I set off three and a half years ago on a 30,000-mile journey for my new book, Chasing The Scream: The First And Last Days of the War on Drugs, to figure out what is really driving the drug war, I believed it too. But what I learned on the road is that almost everything we have been told about addiction is wrong — and there is a very different story waiting for us, if only we are ready to hear it. If we truly absorb this new story, we will have to change a lot more than the drug war. I learned it from an extraordinary mixture of people I met on my travels. I had a quite personal reason to set out for these answers.

When I first learned about this, I was puzzled. Waarom we iedereen gratis geld moeten geven. Londen, mei 2009. 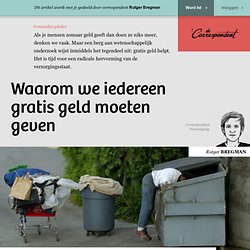