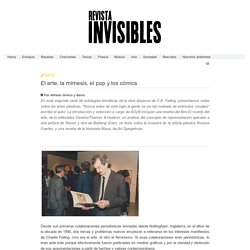 Texto firmado Eduardo Gleeson (pseudónimo de C. Representar. ¿Pop? ¡Pop! Historiabarriga. The Smartest Ways to Network at a Party. Some people enter a room of strangers and glide along from one lively conversation to another, uncovering golden new business contacts. 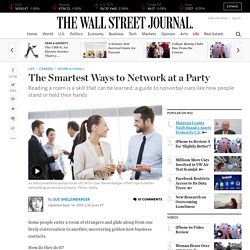 How do they do it? These people know how to read a room—a capacity that can be partly inborn, but also learned. From the barrage of sights, sounds and behavioral details, they extract clues about which people have the most to offer and which to avoid. That energetic guy with the 1,000-watt smile, booming voice, ready handshake and a fistful of other people’s business cards might seem like fun, for example. But he’s moving too fast to connect with people in a meaningful way and is probably just trying to bag clients. “You meet somebody at a business function, and five minutes later they’re slapping you on the back and calling you by a nickname, ‘Yo, Vic!’ The cues to finding allies in a crowded room aren’t obvious. Participants in groups that are welcoming often make eye contact as a newcomer approaches, raise their brows in a welcoming way and smile. Ms. Verbos y preposiciones. Rome. Lost & Found. Manage Your Energy. Homesteading. GroupThink☆

Productivity. The Likely Cause of Addiction Has Been Discovered, and It Is Not What You Think  It is now one hundred years since drugs were first banned — and all through this long century of waging war on drugs, we have been told a story about addiction by our teachers and by our governments.

This story is so deeply ingrained in our minds that we take it for granted. It seems obvious. It seems manifestly true. Until I set off three and a half years ago on a 30,000-mile journey for my new book, Chasing The Scream: The First And Last Days of the War on Drugs, to figure out what is really driving the drug war, I believed it too. But what I learned on the road is that almost everything we have been told about addiction is wrong — and there is a very different story waiting for us, if only we are ready to hear it. If we truly absorb this new story, we will have to change a lot more than the drug war. I learned it from an extraordinary mixture of people I met on my travels. I had a quite personal reason to set out for these answers. When I first learned about this, I was puzzled. Are we all born with synaesthesia? – Shruti Ravindran. Vladimir Nabokov once called his famed fictional creation Lolita ‘a little ghost in natural colours’. 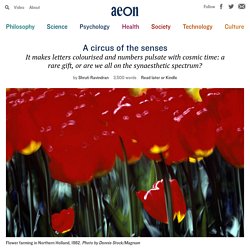 The natural colours he used to paint his ‘little ghost’ were especially vivid in part because of a neurological quirk that generated internal flashes of colour whenever letters of the alphabet appeared within his mind. In his memoir Speak Memory (1951), he described a few of them: ‘b has the tone called burnt sienna by painters, m is a fold of pink flannel, and today I have at last perfectly matched v with “Rose Quartz” in Maerz and Paul’s Dictionary of Color’. The condition he had was synaesthesia, a neurological oddity that mixes up the senses, making those who possess it see as well as hear music, or taste the shapes they set their eyes upon. Synaesthetes such as Nabokov see letters and numbers wreathed in fixed, seemingly idiosyncratic colours. Grapheme-colour synaesthesia, the term for this variety, is the most common sub-type of synaesthesia, occurring among four people in 100. The CULT. The Public Domain Review.

Related:  Articles for Statistics Course   -  Mental Health News   -  Social sciences   -  Activism & Politics   -  The Likely Cause of Addiction Has Been Discovered, and It Is Not What You Think    -  Education   -  Enterprise