Why do buildings fall in earthquakes? - Vicki V. May. Nepal earthquake: How does the search and rescue operation work? International teams of rescuers and medical experts are arriving in Nepal to help hunt and care for earthquake survivors. 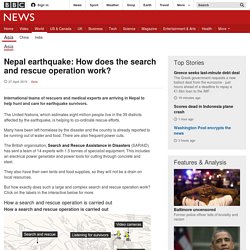 The United Nations, which estimates eight million people live in the 39 districts affected by the earthquake, is helping to co-ordinate rescue efforts. Many have been left homeless by the disaster and the country is already reported to be running out of water and food. There are also frequent power cuts. The British organisation, Search and Rescue Assistance in Disasters (SARAID) has sent a team of 14 experts with 1.5 tonnes of specialist equipment.

This includes an electrical power generator and power tools for cutting through concrete and steel. They also have their own tents and food supplies, so they will not be a drain on local resources. But how exactly does such a large and complex search and rescue operation work? How a search and rescue operation is carried out Strong buildings Video cameras Listening for survivors Weak buildings Local knowledge. Videographic - How do we measure earthquakes? Rescue with The Ruins Catheter : Design for disaster – aid, victims, information, communication, knowledge, experiences, ideas, projects. Posted by kelly on Thursday, July 26, 2012 · Leave a Comment The Ruins Catheter, designed by Idan Raizberg, is a device made to rescue people from collapsed buildings or debris. 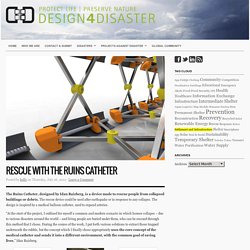 The rescue device could be used after earthquake or in response to any collapse. The design is inspired by a medical balloon catheter, used to expand arteries. “At the start of the project, I outlined for myself a common and modern scenario in which houses collapse – due to various disasters around the world – and living people are buried under them, who can be rescued through this method that I chose. Inflatable Bubble Stabilizer. 19 November 1999 in Turkey. 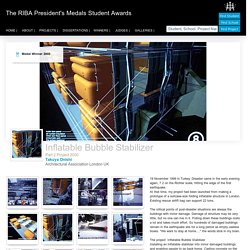 Disaster came in the early evening again, 7.2 on the Richter scale, hitting the edge of the first earthquake. At that time, my project had been launched from making a prototype of a suitcase-size folding inflatable structure in London. Existing rescue airlift bag can support 22 tons. The critical points of post-disaster situations are always the buildings with minor damage. Damage of structure may be very little, but no one can live in it. The project: Inflatable Bubble Stabilizer Installing an inflatable stabilizer into minor damaged buildings and enabling people to go back home. Earthquake-proof school desk provides cover for natural disasters - Images. When designing the desk, Brutter and Bruno had to consider not just the durability of the desk, but also how it would be used every day in the classroom Each corner of the school desk is outfitted with collapsible "crush zones" that distribute the brunt of an impact to the edges, rather than the middle The bottom of the desk remains intact after an earthquake, giving students enough space to remain safe from harm Brutter and Bruno are currently awaiting a patent and official approval from Padua University in Italy so they can begin distributing their desks to disaster-prone areas around the world The desk was submitted to a battery of tests by having different materials of different weights dropped on it from a height With the desks lined up in rows, this space could also act as escape tunnels for students to escape or be more easily rescued by emergency workers Article Summary Read the full article: Earthquake-proof school desk provides cover for natural disasters. 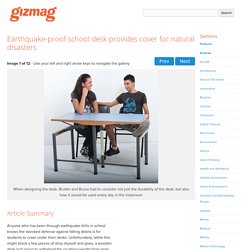 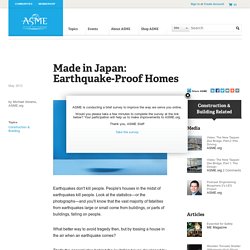 People's houses in the midst of earthquakes kill people. Look at the statistics—or the photographs—and you'll know that the vast majority of fatalities from earthquakes large or small come from buildings, or parts of buildings, falling on people. What better way to avoid tragedy then, but by tossing a house in the air when an earthquake comes? 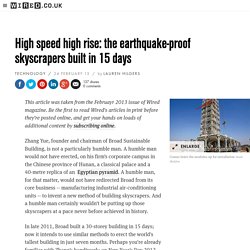 Be the first to read Wired's articles in print before they're posted online, and get your hands on loads of additional content by subscribing online. Zhang Yue, founder and chairman of Broad Sustainable Building, is not a particularly humble man. A humble man would not have erected, on his firm's corporate campus in the Chinese province of Hunan, a classical palace and a 40-metre replica of an Egyptian pyramid. A humble man, for that matter, would not have redirected Broad from its core business -- manufacturing industrial air-conditioning units -- to invent a new method of building skyscrapers. And a humble man certainly wouldn't be putting up those skyscrapers at a pace never before achieved in history. In late 2011, Broad built a 30-storey building in 15 days; now it intends to use similar methods to erect the world's tallest building in just seven months.

"Traditional construction is chaotic," he says.