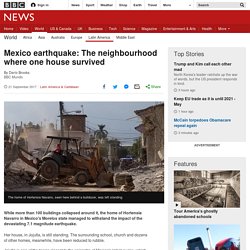 Her house, in Jojutla, is still standing. The surrounding school, church and dozens of other homes, meanwhile, have been reduced to rubble. Jojutla is one of the towns closest to the epicentre of Mexico's latest quake, which struck on Tuesday afternoon killing more than 230 people across the country. "I don't get it, I don't get it," Ms Navarro said while looking around.

She added, without finishing her sentence: "This little house is very sturdy, you see, because look at all the neighbours…" Wherever you look in the area of Emiliano Zapata in Jojutla, there is only devastation. Almost all of the buildings in the area were constructed using solid materials - concrete, metal rods and bricks - but they were not able to withstand the intensity of the earthquake that originated less than 50km (30 miles) away.

Entire towns in Mexico flattened as scale of earthquake damage emerges. Hopes that rescuers will find more survivors trapped beneath collapsed buildings in central Mexico were fading on Thursday, as the scale of the devastation wreaked by the country’s deadliest earthquake for a generation started to become clear. 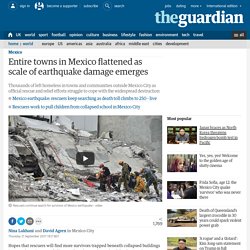 The death toll from Tuesday’s 7.1 magnitude quake rose to 282, including at least 137 in the capital, and was almost certainly set to rise as rescue workers continue to search the precarious ruins amid the threat of aftershocks, collapsing rubble and gas leaks. Rupture within tectonic plate is probable cause of Mexico earthquakes. We are often reminded about the force and devastation from earthquakes that occur around the Pacific Ring of Fire. 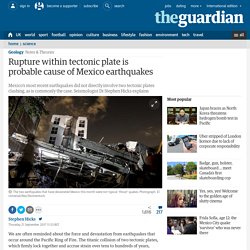 The titanic collision of two tectonic plates, which firmly lock together and accrue strain over tens to hundreds of years, eventually releases this pent-up energy as a large earthquake. We have seen such quakes striking Indonesia, Chile and Japan over the past 15 years. #mexicoearthquake #MexicoQuake #geographyteacher All ≥M5 quakes since 1900. All ≥M7 AND ≤30km deep since 1900. Lots of shallow quakes #GIS. Mexico is one of the most seismically active regions in the world. Why is the country so earthquake-prone? Mexican navy says rescuers no longer searching for girl in collapsed school but one adult alive in rubble. Mexico earthquake: soft soil makes capital shake like it was 'built on jelly' The soft soil that lines the ancient lake bed that Mexico City is built on amplified the shaking from Tuesday's earthquake and increased its destructive force, seismologists say, as they try to better understand the quake that has killed more than 200 people. 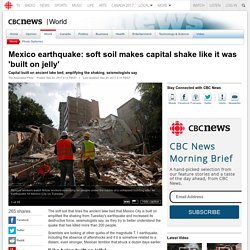 Scientists are looking at other quirks of the magnitude 7.1 earthquake, including the absence of aftershocks and if it is somehow related to a distant, even stronger, Mexican temblor that struck a dozen days earlier. 'Like being built on jelly' Mexico City is built on deep, soft soil that was once the bottom of a lake. Instead of cushioning the city from earthquakes, it exaggerates their effects, said James Jackson, a professor of geophysics at the University of Cambridge in England. Kids dying in a school terribly disheartening. All buildings must be safe esp schools, hospitals... #switch2sendai. 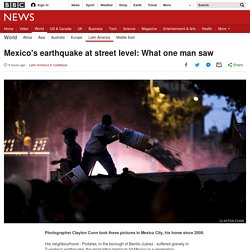 His neighbourhood - Portales, in the borough of Benito Juárez - suffered gravely in Tuesday's earthquake, the most lethal tremor to hit Mexico in a generation. "The area I live in was hit pretty hard, so a lot of the people - a lot of my neighbours are devastated. " This image shows the building two doors down from his apartment. It originally had five storeys. "The two bottom floors have been completely collapsed," he says. Mr Conn was out with his girlfriend when the earthquake struck at 13:14 local time (18:14 GMT). "I had my camera with me," he explains, "so we spent the day in the streets documenting, and also trying to get home.

" A couple of blocks away, he saw crowds of people staring across the rubble of another building, an eight or 10-storey apartment complex. "So everyone - a crowd of a thousand people - immediately raise their fists, and there's almost complete silence. Watch the road 'breathe' during Mexico quake. See the moment children were discovered and rescued from a school after a 7.1M earthquake hit near Mexico City. Example of buildings that held up well. Recent Earthquake Teachable Moments.

Use these links to sign up for notifications What Are Teachable Moments? 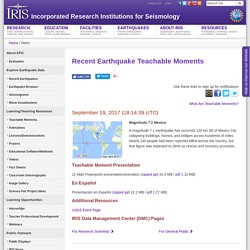 September 19, 2017 (18:14:39 UTC) Not quiet true ...The Popocatepetl is already for years active. A rescuer told me that people under the rubble have been sending text messages to their relatives. Anguish and hope at the collapsed school. Por poco y se cae este edificio en #mexico terremoto 7.1 con epicentro a 150 kms al sur de la capital. *****Watch the seismic waves from the #MexicoCityearthquake cross Alaska. Dots are seismic stations; red is up, blue is down. (Waves are tiny) Mexico quake: Where buildings collapsed. 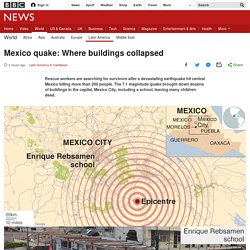 The 7.1 magnitude quake brought down dozens of buildings in the capital, Mexico City, including a school, leaving many children dead. Although the quake hit 120km (75 miles) from Mexico City, it still toppled buildings in the capital The prolonged tremor, which hit at 13:14 local time (18:14 GMT), is the deadliest to hit country in more than 30 years. Buildings swayed violently, structures fell apart and dozens collapsed entirely. Public information map for the 7.1 #earthquake near #Raboso, Mexico is available here #MexicoCity.

At least 21 children and 4 adults killed as earthquake causes primary school to collapse in Mexico. Xochimilco en México □ terrible lo que está pasando... The water resonating during the M7.1 earthquake in the tourist attraction Xochimilco in Mexico City today at 18.14UT. Red cross says there are several people trapped under the building. Some alive. Volunteers line up to carry away pieces of concrete. #sismo. M7.1 earthquake south of Mexico City occurred within the subducting Cocos slab. #BREAKING NEW VIDEO: Huge building collapses after earthquake #Mexico City. @DrLucyJones This is the moment the Earthquake Alarm System went off in Mexico City 7.1 mag. When will California EEW be fully implemented? What are the chances Mexico City is hit by a very strong quake on the anniversary of the 1985 quake and two hours after an earthquake drill?