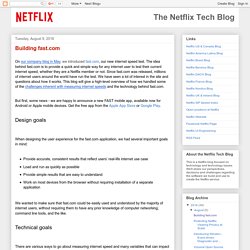 The idea behind fast.com is to provide a quick and simple way for any internet user to test their current internet speed, whether they are a Netflix member or not. Since fast.com was released, millions of internet users around the world have run the test. We have seen a lot of interest in the site and questions about how it works. This blog will give a high-level overview of how we handled some of the challenges inherent with measuring internet speeds and the technology behind fast.com. But first, some news - we are happy to announce a new FAST mobile app, available now for Android or Apple mobile devices. Design goals When designing the user experience for the fast.com application, we had several important goals in mind: Technical goals There are various ways to go about measuring internet speed and many variables that can impact any given measurement, some of which are not under our control. Architecture. FallibleInc/security-guide-for-developers: Security Guide for Developers.

SSD Failures in Datacenters. Despite the growing popularity of Solid State Disks (SSDs) in the datacenter, little is known about their reliability characteristics in the field. 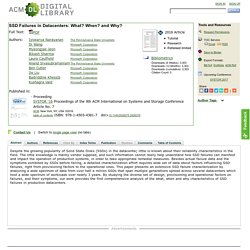 The little knowledge is mainly vendor supplied, and such information cannot really help understand how SSD failures can manifest and impact the operation of production systems, in order to take appropriate remedial measures. Learn Difficult Concepts with the ADEPT Method – BetterExplained. After a decade of writing explanations, I’ve simplified the strategy I use to get new concepts to click. 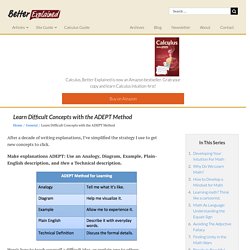 Make explanations ADEPT: Use an Analogy, Diagram, Example, Plain-English description, and then a Technical description. Here’s how to teach yourself a difficult idea, or explain one to others. Cht8687/You-Dont-Need-Lodash-Underscore: Lists of Javascript methods which you can use natively. The Rule of 72. The Rule of 72 is a great mental math shortcut to estimate the effect of any growth rate, from quick financial calculations to population estimates. 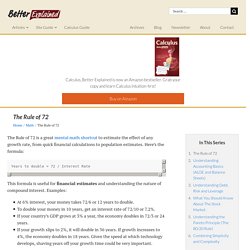 Here’s the formula: Years to double = 72 / Interest Rate This formula is useful for financial estimates and understanding the nature of compound interest. Examples: At 6% interest, your money takes 72/6 or 12 years to double.To double your money in 10 years, get an interest rate of 72/10 or 7.2%.If your country’s GDP grows at 3% a year, the economy doubles in 72/3 or 24 years.If your growth slips to 2%, it will double in 36 years. You can also use the rule of 72 for expenses like inflation or interest: If inflation rates go from 2% to 3%, your money will lose half its value in 24 years instead of 36.If college tuition increases at 5% per year (which is faster than inflation), tuition costs will double in 72/5 or about 14.4 years. Hello, TensorFlow! Jake Vanderplas - Statistics for Hackers - PyCon 2016. 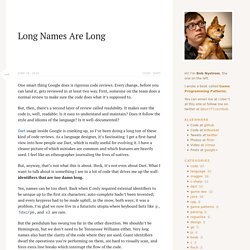 Every change, before you can land it, gets reviewed in at least two way. My First 10 Minutes On a Server - Primer for Securing Ubuntu. My First 5 Minutes on a Server, by Bryan Kennedy, is an excellent intro into securing a server against most attacks. 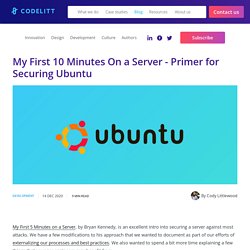 We have a few modifications to his approach that we wanted to document as part of our efforts of externalizing our processes and best practices. We also wanted to spend a bit more time explaining a few things that younger engineers may benefit from. I check our logwatch email every morning and thoroughly enjoy watching several hundreds (sometimes 1000s) of attempts at gaining access with little prevail.

(Many are rather unimaginative such as trying root with password 1234 over and over again). This general overview works for Debian/Ubuntu servers which are our personal favourite choice. The Twelve-Factor App. Execute the app as one or more stateless processes The app is executed in the execution environment as one or more processes. 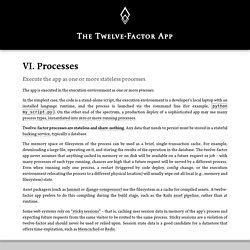 In the simplest case, the code is a stand-alone script, the execution environment is a developer’s local laptop with an installed language runtime, and the process is launched via the command line (for example, python my_script.py). On the other end of the spectrum, a production deploy of a sophisticated app may use many process types, instantiated into zero or more running processes. Twelve-factor processes are stateless and share-nothing. Serverless Architectures. So, dear reader, I hope you enjoyed your time in the land of rainbows, unicorns and all things shiny, because it’s about to get ugly as we get slapped around the face by the wet fish of reality. 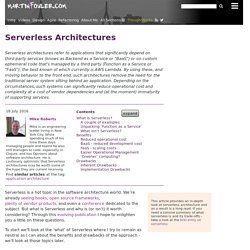 Machine Learning is Fun! Part 3: Deep Learning and Convolutional Neural Networks. Recognizing Objects with Deep Learning You might have seen this famous xkcd comic before. 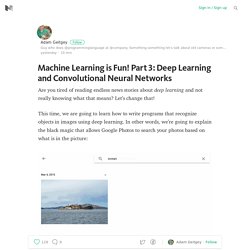 The goof is based on the idea that any 3-year-old child can recognize a photo of a bird, but figuring out how to make a computer recognize objects has puzzled the very best computer scientists for over 50 years. In the last few years, we’ve finally found a good approach to object recognition using deep convolutional neural networks. 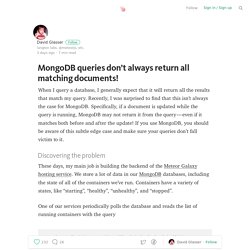 When I query a database, I generally expect that it will return all the results that match my query. Recently, I was surprised to find that this isn’t always the case for MongoDB. Specifically, if a document is updated while the query is running, MongoDB may not return it from the query — even if it matches both before and after the update!

The Fucking Open Web. Nine years ago I was part of an idealistic group of web advocates looking to free the web from the tyranny of the big silos. Researchers find new, ultra-low-level method of hacking CPUs – and there’s no way to detect it. Researchers with the University of Massachusetts have devised a method of breaking a CPU’s internal cryptographic mechanisms in ways that are undetectable by current search methods, including close examination of the processor with high powered microscopes. A bit of context is useful here. For years, we’ve known that a foundry responsible for manufacturing a processor could theoretically make changes to the architecture that would create backdoors, weaken security, or compromise the design.

Such methods would be extremely difficult to integrate without changing the CPU’s data output, performance characteristics, or stability, but they could be done. The one foolproof method of checking a CPU to ensure it was built properly has been direct visual inspection. While difficult, time consuming, and ultimately destructive, engineers can visually inspect the entire surface of a core to ensure it matches the original design.

Kalzumeus Podcast Episode 12: Salary Negotiation with Josh Doody. Vox.SPACE: Being privacy-aware in 2016. Even if you're not doing anything wrong, you are being watched and recorded. - Edward Snowden As more and more people are living a digital life inside their computers, discussions about privacy and whether or not we can expect to be protected from intrusions in our private lives are taking over the Internet. GitHub - vic317yeh/One-Click-to-Be-Pro: A list of the best resources to help you get started in becoming a pro. Linux Journey. J codetoheap pdf.

So you wanna go on-prem do ya - blog dot lusis. If you run a successful SaaS platform, at some point someone is going to come to you with the question: can I run it myself? If you’re considering offering a private version of your SaaS, this post might be for you. At this point, I’ve worked for a few companies that are SaaS vendors. In most cases, we’ve also done some sort of private install. Drivers for private installs. Neural networks and deep learning. A Comprehensive Guide to Building a Scalable Web App on Amazon Web Services - Part 1. 10 Questions Developers Should be Asking Themselves — On Coding. So you want to become a web developer? Well then it’s time to put down that “Learn Super Duper Language v8.3 in 24 hours” book.

Instead, make it a habit to ask yourself these 10 questions every day.