NASA Scientist: Earth Is Due for ‘Extinction-Level’ Event. Earth is due for an “extinction-level” event from the sky, and even if we see it coming, we won’t be able to do anything about it, a NASA scientist said Monday. 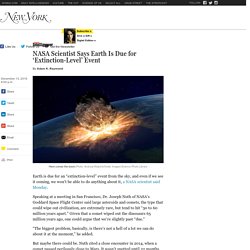 Speaking at a meeting in San Francisco, Dr. Joseph Nuth of NASA’s Goddard Space Flight Center said large asteroids and comets, the type that could wipe out civilization, are extremely rare, but tend to hit “50 to 60 million years apart.” Given that a comet wiped out the dinosaurs 65 million years ago, one could argue that we’re slightly past “due.”

“The biggest problem, basically, is there’s not a hell of a lot we can do about it at the moment,” he added. Maya calendar. The Maya calendar is a system of calendars used in pre-Columbian Mesoamerica, and in many modern communities in the Guatemalan highlands,[1] Veracruz, Oaxaca and Chiapas, Mexico.[2] The essentials of the Maya calendar are based upon a system which had been in common use throughout the region, dating back to at least the 5th century BCE. 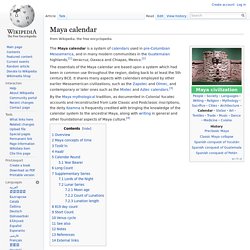 It shares many aspects with calendars employed by other earlier Mesoamerican civilizations, such as the Zapotec and Olmec, and contemporary or later ones such as the Mixtec and Aztec calendars.[3] By the Maya mythological tradition, as documented in Colonial Yucatec accounts and reconstructed from Late Classic and Postclassic inscriptions, the deity Itzamna is frequently credited with bringing the knowledge of the calendar system to the ancestral Maya, along with writing in general and other foundational aspects of Maya culture.[4] Overview[edit] Ancient Maya Astronomy - the Sun, Moon and Planets. The ancient Maya were keen astronomers, recording and interpreting every aspect of the sky. 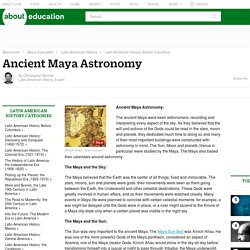 As they believed that the will and actions of the Gods could be read in the stars, moon and planets, they dedicated much time to doing so and many of their most important buildings were constructed with astronomy in mind. The Sun, Moon and planets (Venus in particular) were studied by the Maya. Mystery of the Maya - Maya civilization timeline. <! 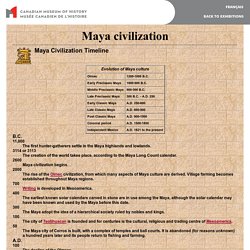 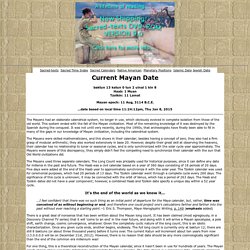 Book Sealed With Seven Seals. Decoding of the Message of an Unknown Advanced Civilization. "History is a vast early warning system. 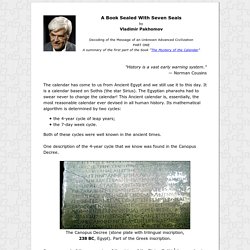 " — Norman Cousins The calendar has come to us from Ancient Egypt and we still use it to this day. It is a calendar based on Sothis (the star Sirius). The Egyptian pharaohs had to swear never to change the calendar! This Ancient calendar is, essentially, the most reasonable calendar ever devised in all human history. Symbolic Interaction Theory. Newmatilda.com. Millennium Simulation Project. Introduction: The Millennium Simulation The Millennium Run used more than 10 billion particles to trace the evolution of the matter distribution in a cubic region of the Universe over 2 billion light-years on a side. 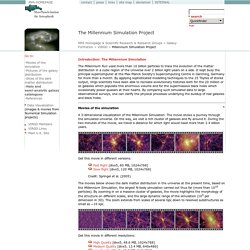 It kept busy the principal supercomputer at the Max Planck Society's Supercomputing Centre in Garching, Germany for more than a month. By applying sophisticated modelling techniques to the 25 Tbytes of stored output, Virgo scientists have been able to recreate evolutionary histories both for the 20 million or so galaxies which populate this enormous volume and for the supermassive black holes which occasionally power quasars at their hearts. 2.1.11.0 Chapter 5 The Reality Foundation Of Mathematics. WhoDoTheyServe.com. Humans Need Not Apply. 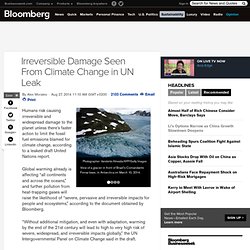 Global warming already is affecting “all continents and across the oceans,” and further pollution from heat-trapping gases will raise the likelihood of “severe, pervasive and irreversible impacts for people and ecosystems,” according to the document obtained by Bloomberg. “Without additional mitigation, and even with adaptation, warming by the end of the 21st century will lead to high to very high risk of severe, widespread, and irreversible impacts globally,” the UN Intergovernmental Panel on Climate Change said in the draft. Related: The study is the most important document produced by the UN about global warming, summarizing hundreds of papers. It’s designed to present the best scientific and economic analysis to government leaders and policymakers worldwide.

Destiny - Official site of Destiny the Game. Spin. From Wikipedia, the free encyclopedia Spin or spinning may refer to: In mathematics, science and technology[edit] In computing[edit] In telecommunications[edit] 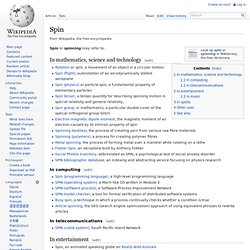 What College Can’t Do - The New Yorker. There’s a special joy in giving someone advice that’s sure not to be followed—“Wake up at the same time every morning”; “Don’t check your e-mail while on vacation”—and William Deresiewicz must have felt it when writing his recent cover story for The New Republic, “Don’t Send Your Kid to the Ivy League.” 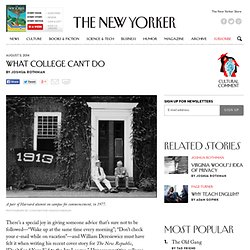 Hypercompetitive colleges, Deresiewicz wrote, are the replicators of the ruling class, recruiting and training “young people who are smart and talented and driven, yes, but also anxious, timid, and lost, with little intellectual curiosity and a stunted sense of purpose.” Better to go to a state school, where the student body is more socioeconomically diverse, or to a “second-tier” liberal-arts college, where “real educational values” persist, than to submit yourself or your child to the careerist “machine” of élite higher education.

To think about busyness in terms of modernity is to think about its deep roots. In many ways, élite colleges are premodern places. Sumer. The irrigated farming together with annual replenishment of soil fertility and the surplus of storable food in temple granaries created by this economy allowed the population of this region to rise to levels never before seen, unlike those found in earlier cultures of shifting cultivators. This much greater population density in turn created and required an extensive labour force and division of labour with many specialised arts and crafts. At the same time, historic overuse of the irrigated soils led to progressive salinisation, and a Malthusian crisis which led to depopulation of the Sumerian region over time, leading to its progressive eclipse by the Akkadians of middle Mesopotamia.

Sumer was also the site of early development of writing, progressing from a stage of proto-writing in the mid 4th millennium BC to writing proper in the 3rd millennium BC (see Jemdet Nasr period). Origin of name[edit] City-states in Mesopotamia[edit] Timeline of Jainism. This article describes a Timeline of Jainism, a religion practiced mainly by about five million people in India. Origins of Jainism[edit] The views regarding Origins of Jainism are disputed among various scholars. Jains believe their religion to be ever-existing, having no origin and end. It is occasionally forgotten by humans and revived by a succession of tirthankara. The existence of Pārśva (c. 877–777 BCE), the twenty-third tirthankara, is the earliest Jain leader now accepted as a historical figure.[1][2][3][4] Jainism.

Jainism (/ˈdʒeɪnɪzəm/[1] or /ˈdʒaɪnɪzəm/[2]), traditionally known as Jin Sashana or Jain dharma (Sanskrit: जैन धर्म), is an Indian religion that prescribes a path of nonviolence (ahimsa) towards all living beings. Practitioners believe that nonviolence and self-control are the means by which they can obtain liberation. The three main principles of Jainism are non-violence (ahimsa), non-absolutism (anekantavada) and non-possessiveness (aparigraha). Followers of Jainism take 5 major vows: non-violence, non-lying, non-stealing, chastity, and non-attachment. Atomism. Atomism (from ancient Greek atomos , meaning "uncuttable") is a natural philosophy that developed in several ancient traditions.

The atomists theorized that nature consists of two fundamental principles: atom and void . Unlike their modern scientific namesake in atomic theory , philosophical atoms come in an infinite variety of shapes and sizes, each indestructible, immutable and surrounded by a void where they collide with the others or hook together forming a cluster. Emergentism. In philosophy, emergentism is the belief in emergence, particularly as it involves consciousness and the philosophy of mind, and as it contrasts (or not) with reductionism. A property of a system is said to be emergent if it is in some sense more than the "sum" of the properties of the system's parts. An emergent property is said to be dependent on some more basic properties (and their relationships and configuration), so that it can have no separate existence.

However, a degree of independence is also asserted of emergent properties, so that they are not identical to, or reducible to, or predictable from, or deducible from their bases. Holism. For the suffix, see holism. Holism (from Greek ὅλος holos "all, whole, entire") is the idea that natural systems (physical, biological, chemical, social, economic, mental, linguistic, etc.) and their properties should be viewed as wholes, not as collections of parts. This often includes the view that systems function as wholes and that their functioning cannot be fully understood solely in terms of their component parts.[1][2] Problem of universals. Reality.

Not to be confused with Realty. Metaphysics. Metaphysics is a traditional branch of philosophy concerned with explaining the fundamental nature of being and the world that encompasses it,[1] although the term is not easily defined.[2] Traditionally, metaphysics attempts to answer two basic questions in the broadest possible terms:[3]

Karl Popper. Theaetetus (dialogue) Euclides is prompted to share his book when Terpsion wonders where he had been: Euclides, who apparently can usually be found in the marketplace of Megara, was walking outside of the city and had happened upon Theaetetus being carried from Corinth to Athens with a case of dysentery and a minor war wound; Euclides remarks that Socrates had made some uncanny predictions about Theaetetus needing to rise to fame. Euclides' book is read aloud to the two men by a slave boy in the employ of Euclides. In this dialogue, Socrates and Theaetetus discuss three definitions of knowledge: knowledge as nothing but perception, knowledge as true judgment, and, finally, knowledge as a true judgment with an account.

Ontology. Parmenides was among the first to propose an ontological characterization of the fundamental nature of reality Overview[edit] Dialectical monism. Dialectical Monism Principles[edit] Elisionism. Elisionism is a philosophical standpoint encompassing various social theories. Elisionist theories are diverse; however, they are unified in their adherence to process philosophy as well as their assumption that the social and the individual cannot be separated.[1] The term elisionism was coined by Margaret Archer in 1995 in the book Realist Social Theory: The Morphogenetic Approach.[2] Elisionism is often contrasted with holism, atomism, and emergentism.[3] Holomovement. Conjectures and Refutations. Theory of justification. Epistemology.