In a June article from New York magazine, Todd Yellin, Netflix’s vice president of product, described how the company offered over a dozen posters — or “row art” — for its women’s wrestling series “GLOW.” One poster shows a picture of two cats fighting; another features an image of the show’s principal male lead, Marc Maron; another depicts Alison Brie and Betty Gilpin, duking it out in the ring. But now Netflix is facing a backlash after users have claimed that in some instances, the practice amounts to racial targeting.

Confused? Here’s what you need to know: Some Netflix subscribers say the service is offering misleading visual representations of certain titles in a bid to entice viewers based on race or ethnicity. In an interview with The Guardian, the Brooklyn-based filmmaker Tobi Aremu said he felt “duped” by the images he saw. S5 Coasts 19 20. World's richest 1% cause double CO2 emissions of poorest 50%, says Oxfam. The wealthiest 1% of the world’s population were responsible for the emission of more than twice as much carbon dioxide as the poorer half of the world from 1990 to 2015, according to new research. 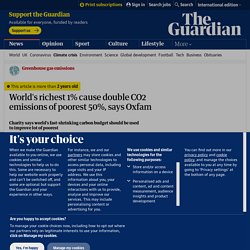 Carbon dioxide emissions rose by 60% over the 25-year period, but the increase in emissions from the richest 1% was three times greater than the increase in emissions from the poorest half. The report, compiled by Oxfam and the Stockholm Environment Institute, warned that rampant overconsumption and the rich world’s addiction to high-carbon transport are exhausting the world’s “carbon budget”. Such a concentration of carbon emissions in the hands of the rich means that despite taking the world to the brink of climate catastrophe, through burning fossil fuels, we have still failed to improve the lives of billions, said Tim Gore, head of policy, advocacy and research at Oxfam International.

Oxfam argues that continuing to allow the rich world to emit vastly more than those in poverty is unfair. The Global Extremes of Population Density - Metrocosm. A 12-storey pig farm: has China found the way to tackle animal disease? The buildings do not even look like farms. 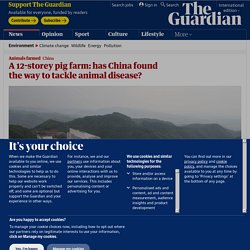 They are huge grey concrete blocks, many storeys high, which stand side by side in the middle of what might look like a quarry, a “hole” of red earth dug in the heart of a mountain. We are on the Yaji mountain, which in Chinese means “sacred”, a few kilometres south of the city of Guigang in southern China. What we are looking at is the tallest pig farm in the world; units up to nine storeys high housing thousands of pigs, with construction of a 12-storey pig unit under way.

“On each floor we can breed 1,270 pigs,” says Yuanfei Gao, vice-president of Yangxiang, the company that built the farm. “But in the future with the design of the new buildings we plan to have 1,300 pigs per floor.” Yangxiang is one of the Chinese giants of the pork industry, producing about 2 million pigs a year in a dozen farms throughout China. Over the past two years Chinese farmers and consumers have been rocked by pandemic after pandemic. Jobs That Won't Be Replaced By AI: Secure Your Future Now. Menu Jobs That Won’t Be Replaced By AI: Secure Your Future Now Are you curious about what degree should you major in? 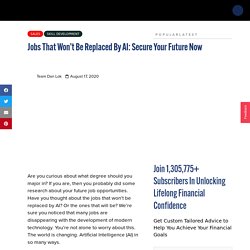 If you are, then you probably did some research about your future job opportunities. Have you thought about the jobs that won’t be replaced by AI? Or the ones that will be? Image by Twocoms / Shutterstock The future is here. But first, before we dive deep into what jobs are irreplacable, let’s look at the jobs that are under the biggest threat. Job Economy Apocalypse: 7 Jobs Under Imminent Threat AI has already started to replace humans. AlphaGo - The Movie. This Is How Empty Canada Really Is (PHOTOS) Italy Population Density. World Population Unevenly Distributed.