CSS Reference. An Introduction To Graphical Effects in CSS : Adobe Dreamweaver Team Blog. Over the past couple of years, CSS has gotten a set of new properties that allow us to create quite advanced graphical effects right in the browsers, using a few lines of code, and without having to resort to graphics editors to achieve those effects. 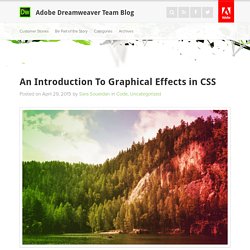 If you are like me, then that sounds like music to your ears. I don’t do well in graphics editors and would choose a code path over a graphical editor path any day. CSS now allows us to do more graphical work right in our text editors. 50+ Awesome CSS3 Techniques for Better Designs. CSS3 is gaining momentum, despite the fact that the standard hasn’t even been finalized. 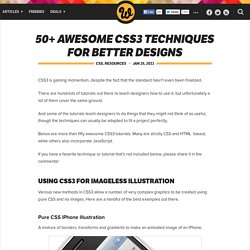 CSS and Graphics. Multiple Backgrounds and Borders with CSS 2.1. Using CSS 2.1 pseudo-elements to provide up to 3 background canvases, 2 fixed-size presentational images, and multiple complex borders for a single HTML element. 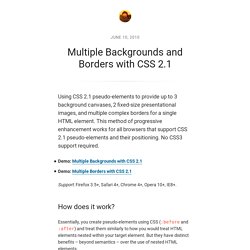 This method of progressive enhancement works for all browsers that support CSS 2.1 pseudo-elements and their positioning. No CSS3 support required. Support: Firefox 3.5+, Safari 4+, Chrome 4+, Opera 10+, IE8+. HTML5, CSS3, JS Demos, Creations and Experiments. LESS « The Dynamic Stylesheet language. Revised Font Stack. CSS Lint. Kick-Start Your Project: A Collection of Handy CSS Snippets. Don't start your project with an empty style sheet: there are many great snippets that can make your life easier and speed up web development. 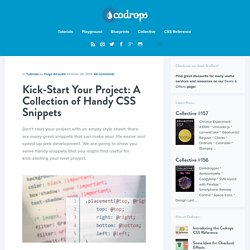 We are going to show you some handy snippets that you might find useful for kick-starting your next project. In one of the previous articles “Basic Ready-to-Use CSS Styles”, we saw how we could create a suite of classes to help the design process while making a website. I hope you made your own set of patterns! Streamlining CSS Print Design with Sass. However, as we completed a critical mass of templates and moved from the proof-of-concept phase to production, CSS maintenance considerations rose to the fore. 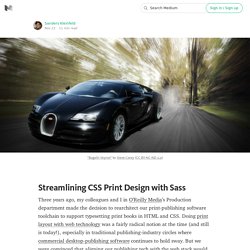 In our initial rollout of Paged Media designs, we built one set of core CSS files that contained a complete implementation of the styling for all standard book elements (headers, footers, chapter openers, tables, figures, etc.) for one of our simplest and most popular interior designs. CSS for all other interiors designs then @imported this core.css and performed selective overrides to adjust styling as appropriate. This approach served us well for a while, but as we added more and more templates, the monolithic nature of our CSS architecture became a liability. We had amassed a mountain of customizations that were piled on top of — and somewhat precariously balanced on — the style base.

A friendly web development tutorial. CSS Tooltip. If you need a really simple and basic cross-browser tooltip on your website, this pure CSS tooltip is the one for you. 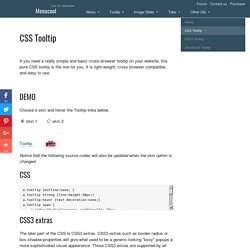 It is light-weight, cross browser compatible, and easy to use. Choose a skin and hover the Tooltip links below. Tooltip. Buttons · Bootstrap. Use Bootstrap’s custom button styles for actions in forms, dialogs, and more.

Shared as an exercise in creative problem solving and working within constraints. This is not a “production ready” CSS icon set. Demo: Pure CSS GUI icons Known support: Firefox 3.5+, Safari 5+, Chrome 5+, Opera 10.6+. An exercise in constraint Several months ago I was experimenting with the creation of common GUI icons with CSS. Pseudo-elements provide many possibilities to developers interested in writing semantic HTML.

Cssarrowplease. Increasing the Clickable Area of Inline Links. Demo It has been best prac­tice for some time now to ensure that nav­ig­a­tion links have appro­pri­ate pad­ding. 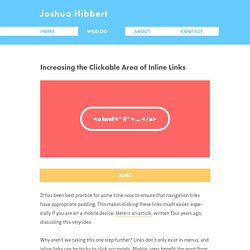 This makes click­ing these links much easier, espe­cially if you are on a mobile device. Here is an art­icle, writ­ten four years ago, dis­cuss­ing this very idea. Why aren’t we tak­ing this one step fur­ther? Links don’t only exist in menus, and inline links can be tricky to click accur­ately. Now keep in mind that this is only a thought. Coding Kung-fu: 35 Graphics Built Purely With CSS3.

Look at the graphics below, awesome Photoshop works right? 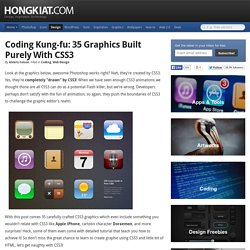 Nah, they’re created by CSS3. Yes, they’re completely “drawn” by CSS3! When we have seen enough CSS3 animations we thought those are all CSS3 can do as a potential Flash killer, but we’re wrong. Developers perhaps don’t satisfy with the fun of animation, so again, they push the boundaries of CSS3 to challenge the graphic editor’s realm. With this post comes 35 carefully crafted CSS3 graphics which even include something you wouldn’t relate with CSS3 like Apple iPhone, cartoon character Doraemon, and more surprises!

You are strongly recommended to view these demos using the latest version of Safari or Developer version of Google Chrome. RSS Feed Icon RSS Feed Icon built with CSS3, exclusively from Hongkiat! Apple iMac. Quick Tip: The Multi-Column CSS3 Module. For over six years, CSS3 columns have been available to us; yet, strangely, they're rarely utilized. Because they currently are only supported in Mozilla and Webkit-based browsers, this means that - again - no support in Internet Explorer. But that's okay! The world will not end if IE users see one longer paragraph. I'll show you how to use this helpful module in today's video quick tip. Inspiration for Text Styles and Hover Effects.

A couple of creative text styles and hover effects for your inspiration. Some effects use experimental techniques including SVG masking and Canvas. View demo Download source. A Complete Guide to Grid. CSS Overlay Techniques. There are several techniques for creating overlays: from using an absolutely positioned element to outlines and pseudo-elements. In this article we are going to explore each technique's styles with their pros and cons. Design patterns, a set of best practices and techniques that aim to solve some of the most common design “problems”, are usually presented in the context of design principles. One of these design principles is the “Stay On Page” principle. This principle is based on the fact that page refreshes are disruptive to the user’s mental flow, causing what is known as “change blindness”, and that we need to be able to avoid breaking the visual flow of the user wherever and whenever we can.

A Pen by Andre Bulatov.