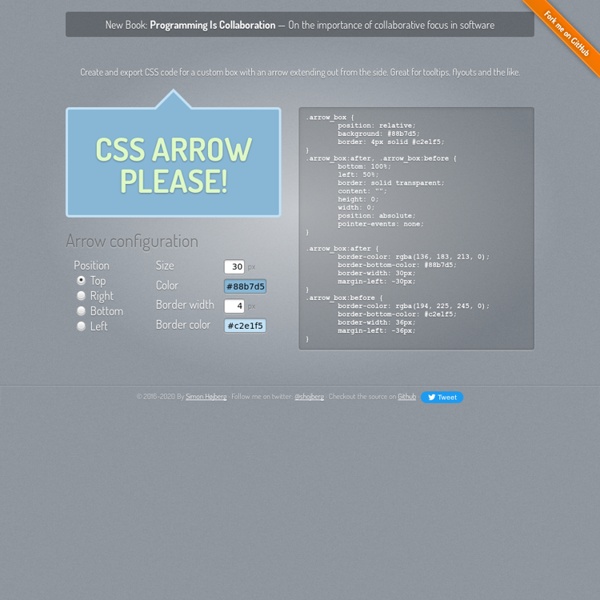 Pure CSS GUI icons (experimental) An experiment that uses pseudo-elements to create 84 simple GUI icons using CSS and semantic HTML. Shared as an exercise in creative problem solving and working within constraints. This is not a “production ready” CSS icon set. Demo: Pure CSS GUI icons CSS Refreshers: Borders Sure, we’re all familiar with borders. Is there anything new that could possibly be introduced? Well, I bet there’s quite a few things in this article that you never knew about! Not only can CSS3 be used to create rounded corners, but plain-ole' CSS can also be wrestled into displaying custom shapes.

CSS3 Solutions for Internet Explorer Advertisement Experienced developers understand that CSS3 can be added to new projects with progressive enhancement in mind. This ensures that content is accessible while non-supportive browsers fall back to a less-enhanced experience for the user. But developers could face a situation where a client insists that the enhancements work cross-browser, demanding support even for IE6.

Text Shadow Generator Use this CSS3 text shadow generator to easily add text shadow styles into your web project. Your browser does not support the CSS3 text-shadow property. You can still use this tool to generate the CSS3 rule, but you won' be able to see the results. <div class="error_msg">Please enable Javascript to use this page. Multiple Backgrounds and Borders with CSS 2.1 Using CSS 2.1 pseudo-elements to provide up to 3 background canvases, 2 fixed-size presentational images, and multiple complex borders for a single HTML element. This method of progressive enhancement works for all browsers that support CSS 2.1 pseudo-elements and their positioning. No CSS3 support required. Support: Firefox 3.5+, Safari 4+, Chrome 4+, Opera 10+, IE8+. How does it work?

The No-Pressure Introduction to CSS3 It's difficult to escape the hype surrounding CSS3 at the moment, yet it has created a divide in the community. If you read any blog post on the subject and it is flooded with comments by developers who feel they still cannot use CSS3 in their work. Rather than being encouraging the responses from the experts in our community can appear as aggressive and superior. Although they are correct in saying CSS3 can be used now, the decision must still fall to the individual, even if their opinions are based on inaccurate assumptions. In this article I'll try to cover some of the more widely adopted CSS3 advancements, showing you not only how to use them but also the support you will likely expect from the major browsers. Why We Can Use CSS3 Now

jQuery NiceScroll plugin - scrolling for desktop, mobile and touch devices In number theory, Fermat's Last Theorem states that no three positive integers a, b, and c can satisfy the equation an + bn = cn for any integer value of n greater than two. This theorem was first conjectured by Pierre de Fermat in 1637, famously in the margin of a copy of Arithmetica where he claimed he had a proof that was too large to fit in the margin. No successful proof was published until 1995 despite the efforts of countless mathematicians during the 358 intervening years.

Quick Tip: The Multi-Column CSS3 Module For over six years, CSS3 columns have been available to us; yet, strangely, they're rarely utilized. Because they currently are only supported in Mozilla and Webkit-based browsers, this means that - again - no support in Internet Explorer. But that's okay! The world will not end if IE users see one longer paragraph. Learn CSS Positioning in Ten Steps: position static relative absolute float 1. position:static The default positioning for all elements is position:static, which means the element is not positioned and occurs where it normally would in the document. Normally you wouldn't specify this unless you needed to override a positioning that had been previously set. 2. position:relative If you specify position:relative, then you can use top or bottom, and left or right to move the element relative to where it would normally occur in the document.

nanoScroller.js nanoScroller.js is a jQuery plugin that offers a simplistic way of implementing Mac OS X Lion-styled scrollbars for your website. It uses minimal HTML markup being .nano > .nano-content. The other scrollbar div elements .pane > .nano-slider are added during run time to prevent clutter in templating. 50+ Awesome CSS3 Techniques for Better Designs CSS3 is gaining momentum, despite the fact that the standard hasn’t even been finalized. There are hundreds of tutorials out there to teach designers how to use it, but unfortunately a lot of them cover the same ground. And some of the tutorials teach designers to do things that they might not think of as useful, though the techniques can usually be adapted to fit a project perfectly. Below are more than fifty awesome CSS3 tutorials.