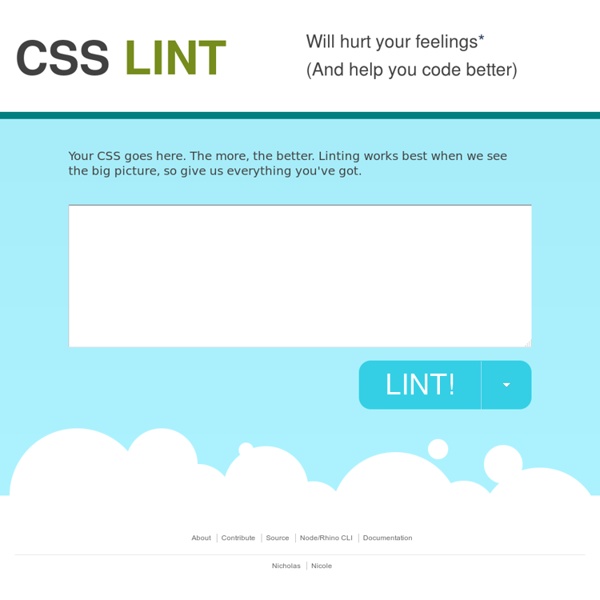 How to create dynamic buttons with CSS 3D Last year we developed the new Orangina website with Achtung, with the aim of creating something that felt organic and playful. However, one simple feature turned out to be quite challenging: the buttons. The unorthodox shapes we were after can be tedious to create using CSS. Often the easiest option is to resort to using images – however, this is not always ideal as it makes everything far less flexible. Don't miss this Revised Font Stack Serious efforts are being made to get more typeface choices on the web to enhance web typography. Still, most of us prefer web-safe fonts like: Verdana, Georgia, Times New Roman and Arial. Though choices are limited, yet the number can be increased by exploring other pre-installed fonts. “… font stacks are ultimately design factors, and should be scrutinized as such.”—Nathan Ford, Better CSS font stacks Baskerville, Garamond and Palatino have already been used a few times to create font-stacks that inspire.

XHTML Character Entity Reference This page contains the 252 allowed entities in HTML 4 and XHTML 1.0, as outlined in section 24 of the official HTML 4 specifications, published by the W3C. If you find it helpful we'd really appreciate a social share! Each entity is contained within a small box that contains four lines: The first line shows how the entity will be displayed on your webpage.

Baseline - a designer framework by ProjetUrbain.com “Real” baseline grid on the web When I first started to design Baseline, I wanted to base the grid on the work of Josef Müller-Brockmann, unfortunately some missing CSS attributes — like type leading — kept me from implementing a true grid based approach. I then decided to another look at the basic grid used in print: the baseline grid. Most frameworks and examples of baseline grids simply put the type on a regular line-height, but one problem with this approach is that the text rarely lines up correctly between columns and headlines — H1 through H6.

Image Placeholder APIs In a previous article I discovered fake images please which allowed you to put image placeholders on your webpage by using an image placeholder API. I had a number of comments about this post from other people sending links to other image placeholder APIs. Here is a list of some more APIs. PlaceKitten Top Free CSS3 Code Generators Newer online tools & webapps allow developers to create rapid websites without manually writing each individual line of code. Frontend development is one area that has seen a lot of growth in the way of frameworks & code libraries. But many developers also forget about code generators and their value in building websites. The following resources are completely free webapps that can generate CSS3 code for patterns, gradients, or even browser prefixed properties.

Kick-Start Your Project: A Collection of Handy CSS Snippets Don't start your project with an empty style sheet: there are many great snippets that can make your life easier and speed up web development. We are going to show you some handy snippets that you might find useful for kick-starting your next project. In one of the previous articles “Basic Ready-to-Use CSS Styles”, we saw how we could create a suite of classes to help the design process while making a website. I hope you made your own set of patterns! Today we are going to see how we can continue this exercise with some things a little bit more technical. I’ll show you a bunch of CSS snippets you may or may not know, which can dramatically increase your CSS development speed.

HTML Compressor - Reduce the size of HTML, CSS, JavaScript, PHP and Smarty code. You need to enable JavaScript to use this website. Choosing the correct Code Type makes the compression of your code more safe and effective. Choosing the wrong option may lead to fewer optimizations or errors. There are 3 main groups, x/html, CSS and JavaScript. Stylish CSS3 progress bars You've seen progress bars everywhere, they are those bars that display the current completion state for a process, such as a download or file transfer. Whether you're building a desktop or a web application, at a certain point, you may need to use this UI element. Having said that, in this article you'll learn how to create stylish and animated progress bars using CSS3. View demo The HTML

Building vorlon.JS with the help of the developer community and what’s next Recently at //BUILD/ 2015 and in the Microsoft Edge Web Platform Summit, we have talked about how our focus on bringing our teams and the technologies behind our web platform closer to the broader community of developers. We’ve made it a priority to contribute to open source projects that improve web interoperability and help developers spend less time testing across browsers and devices. One such project we recently announced is vorlon.JS – an open source, extensible, platform-agnostic tool for remotely debugging and testing your JavaScript. vorlon.JS itself is a small web server you can run from your local machine or install on a server for your team to access, which serves the vorlon.JS dashboard (your command center) and communicates with remote devices.

CSS vs SVG: Styling Checkboxes and Radio Buttons : Adobe Dreamweaver Team Blog This is the second article in a series of articles comparing some commonly-used CSS techniques to their SVG counterparts, showing the pros and cons of each, in an attempt to help you make a better decision as to which of these two to choose when solving common design problems on the web. In the previous post, we talked about creating textured text effects using both CSS and SVG, and came to the conclusion that SVG is currently more capable and powerful than CSS is in doing that. In this post, we’ll tackle custom HTML form styling—specifically checkbox and radio inputs. Form elements are particularly not the easiest elements to style with CSS, as you might already know. But they’re also not particularly hard to style either. To overcome the limitations brought by the fact that we have no style selectors for styling the innards of checkbox and radio inputs in CSS, developers have long used one popular way to style these inputs: using images.

Increasing the Clickable Area of Inline Links Demo It has been best prac­tice for some time now to ensure that nav­ig­a­tion links have appro­pri­ate pad­ding. This makes click­ing these links much easier, espe­cially if you are on a mobile device. Here is an art­icle, writ­ten four years ago, dis­cuss­ing this very idea.