US of A and the Bear 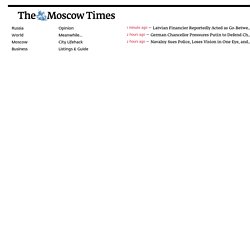 In Lithuania, NATO Troops Set Up Near A Potentially Hostile Border. Just two years ago, it would have been nearly unthinkable for the Western alliance to set up a battalion here, some two hours' drive from Russia. 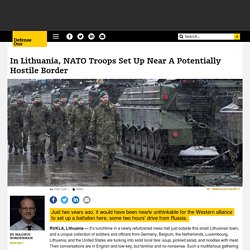 RUKLA, Lithuania — It’s lunchtime in a newly refurbished mess hall just outside this small Lithuanian town, and a unique collection of soldiers and officers from Germany, Belgium, the Netherlands, Luxembourg, Lithuania, and the United States are tucking into solid local fare: soup, pickled salad, and noodles with meat. Their conversations are in English and low-key, but familiar and no-nonsense. Such a multifarious gathering of NATO troops might signal a planning conference, an educational course, or an industry exhibition — but it’s none of these. 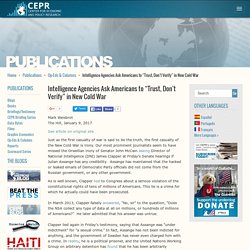 From 'The Great Game' to Ukraine: How the West's anti-Russian narratives always turn out wrong. Arthur Schopenhauer said that “All truth passes through three stages. 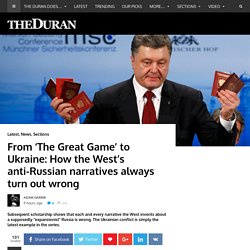 First, it is ridiculed. Second, it is violently opposed. McFaul on Russia: How the US' Demands Risk War - The Duran. In a lengthy article in the Washington Post lamenting the Brexit vote and calling it a “victory for Putin”, former US ambassador to Russia Michael McFaul slips out a fascinating comment that is very revealing of the looking glass world of neocon thinking: “He (Putin) stopped NATO’s expansion by invading Georgia in 2008 and slowed E.U. expansion by invading Ukraine in 2014. 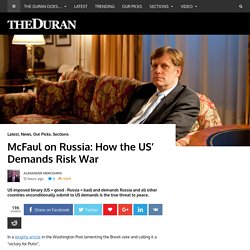 He has increased Russia’s economic hegemony in large parts of the former Soviet Union by building the Eurasian Economic Union (EEU). As a result of his military intervention in Syria, Putin is expanding Russia’s presence in the Middle East, as Europe and the United States pull back.” In McFaul’s world all this is taken as axiomatically bad. Stopping NATO expansion and slowing EU expansion Putin or rather Russia did not invade Georgia in 2008. Nor did Russia invade Ukraine in 2014.

How Russia is preparing for WWIII - The Duran. Russia Bolsters Its Submarine Fleet, and Tensions With U.S. Rise. Mr. 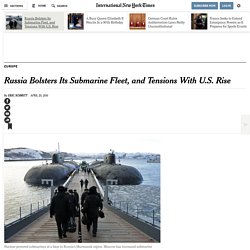 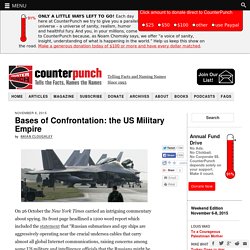 Its front page headlined a 1200 word report which included the statement that “Russian submarines and spy ships are aggressively operating near the crucial undersea cables that carry almost all global Internet communications, raising concerns among some US military and intelligence officials that the Russians might be planning to attack those lines in times of tension or conflict.” Onion Studios. Game of trolls: the hip digi-kids helping Putin's fight for online supremacy.

The job ads give little away. 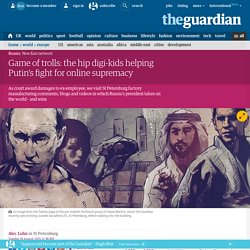 They ask only for “content managers” or “production editors” in a nondescript part of St Petersburg, and offer an above-average salary. But for successful applicants, a thriving business offering rich opportunities for creativity and professional growth awaits. You can hone your writing skills subtly weaving patriotic sentiments into blog posts about beauty tips, fortune-telling, fishing or photography. You can revile the United States and Ukraine, posting news links and funny photo memes to local forums.

If your English and political loyalty is flawless, you may even get the chance to insert angry comments on major western news sites. Is the Iran Nukes Deal Aimed at Crushing Putin? “The European Union is quietly increasing the urgency of a plan to import natural gas from Iran as relations with Tehran thaw (and) those with top gas supplier Russia grow colder.” 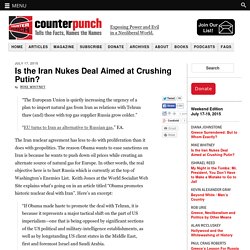 “EU turns to Iran as alternative to Russian gas,” EA. The Iran nuclear agreement has less to do with proliferation than it does with geopolitics. The reason Obama wants to ease sanctions on Iran is because he wants to push down oil prices while creating an alternate source of natural gas for Europe. We restarted the Cold War: The real story about the NATO buildup that the New York Times won’t tell you. Have you picked up on the new trope du jour? 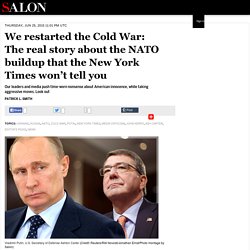 We are all encouraged to bask in our innocence as we lament the advent of a new Cold War. The thought has been in the wind for more than a year, of course, at least among some of us. But we witness a significant turn, and I hope this same some of us are paying attention. Putin’s Plot to Get Texas to Secede - Casey Michel. Nathan Smith, who styles himself the “foreign minister” for the Texas Nationalist Movement, appeared last Spring at a far-right confab in St.

Petersburg, Russia. Despite roaming around in his cowboy hat, Smith managed to keep a low-key presence at the conference, which was dominated by fascists and neo-Nazis railing against Western decadence. US to store heavy weapons in Poland under Nato plan. The US will take a decision soon to store heavy weapons including tanks and infantry fighting vehicles in Poland, the Polish defence minister says. Tomasz Siemoniak said he had discussed such US military deployments last month with US Defence Secretary Ash Carter. The US military has been conducting massive drills with Nato allies in Eastern Europe amid regional alarm over Russia's role in the Ukraine conflict. Russian officials said the plan could have "dangerous consequences". The three Baltic states also plan to store US heavy weapons, officials say. U.S. Is Poised to Put Heavy Weaponry in Eastern Europe.

RIGA, Latvia — In a significant move to deter possible Russian aggression in Europe, the Pentagon is poised to store battle tanks, infantry fighting vehicles and other heavy weapons for as many as 5,000 American troops in several Baltic and Eastern European countries, American and allied officials say. The proposal, if approved, would represent the first time since the end of the Cold War that the United States has stationed heavy military equipment in the newer member nations in Eastern Europe that had once been part of the Soviet sphere of influence. ’s annexation of Crimea and the war in eastern Ukraine have caused alarm and prompted new military planning in NATO capitals. Russians React To Western Food Ban With Pride, Resignation. Customers shop for produce at the Danilovsky Market in Moscow. The food import ban prevents the import of almost all fresh food from the U.S., Europe and other Western countries.

What's left in the market is grown locally or by Russian allies. Karoun Demirjian hide caption itoggle caption Karoun Demirjian Customers shop for produce at the Danilovsky Market in Moscow. Return of the Evil Empire. The U.S. Owns the Narrative on Ukraine. The West's Reckless Rush Towards War with Russia. ​Waging war against Russia, one pipeline at a time — RT Op-Edge.

Washington’s Iron Curtain in Ukraine. Tightening the U.S. Grip on Western Europe. Why is Putin in Washington’s Crosshairs? “Washington wants to weaken Moscow economically by slashing its gas revenues and, thus, eroding its ability to defend itself or its interests. Shoots Down Russia’s Push to Scrap Missile Shield. For years, the U.S. government has insisted that a planned missile defense system in Europe served to protect America's allies against attacks from Iran. Cold War: Map shows areas prohibited to Soviet travelers in the United States. Kevin Baron's blog. Russia Demands U.S. End Support of Democracy Groups. Ivan Sekretarev/Associated Press Golos, Russia’s only independent election monitoring group, is among the organizations that expect to lose financing from the United States Agency for International Development next month. Romney camp doubles down on Russia as “geopolitical foe” TAMPA - Republican presidential nominee Mitt Romney was right when he called Russia America's "No. 1 geopolitical foe" and a Romney administration would confront Moscow on its poor record on democracy, human rights, and the rule of law, two top foreign-policy advisors to the GOP candidate said Tuesday.

LYONS: Russia's shot across the bow.